The session was doomed to failure before I left home. But it had to be got out of the way. I'd been on a tackle buying spree. A new spod and head torch weren't enough. No. There were some feeders bought to convert into in-line jobs, and - worst of all - three shiny new bobbins and isotopes. If there's one thing guaranteed to result in a blank, it's new indicators. At least the day at the pit was a pleasant one to spend admiring them. They they went up and down when I played with the line, so I guess they'll work okay when a fish eventually comes along. 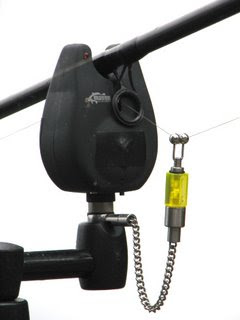 Ironically the alarms and pod caught fish on their first trips, but indicators are a different matter. They're pretty though, you have to admit! They're part of my policy of mixing tarty and not cheap with cheap and cheerful. The pod is a Nash Hooligun 'entry level' pod. It has the advantage that Korum banksticks fit it. With two of those in the back position I can raise my rods higher at the back to get the tips low to the water. This is an advantage when waterfowl are about.

The spod certainly did the job, though, and I wish I'd bought it a couple of years back when I first saw one. I've used casting clips with spods in the past so they retrieve nose first, rather than backwards. But they were home made modifications that didn't always release and sometimes tangled. The MCF Swordfish is a bit different and (so far) releases every time, admittedly occasionally needing a jerk at the start of the retrieve. I now want a bigger one. Or I might get the wire bending tools out...

The first blossoms of spring on the blackthorn gave way to the white cascades of the hawthorn a few weeks ago. As those began to fade last week the elder was already in bud and is now in flower. A sure sign that summer is almost here. So, with June a couple of days away, I was rather surprised to hear, and then see, a cuckoo calling late in the afternoon. That, and watching a group of tree creepers feeding and squabbling in the willows almost (almost) made up for the blank. How some people can sit reading books when they are fishing is beyond me, there's always something interesting going on in the natural world if you keep your eyes and ears open. In fact there was so much noise from the birds in the surrounding trees and undergrowth (chaffinch, robin, sedge warbler, great tit, blackbird, and more I didn't recognise) that I could hardly hear my radio at times!