No fish (the real blog)

Three nights (as in four evenings and three mornings with most of Sunday spent away from the water) with hardly a sign of fish until I was packing up when some fish, maybe hybrids, showed at dusk. The first two nights were spent in a swim that isn't a swim, but plumbing around with the MkII modifed plumbing rig found something interesting, the south-westerly was blowing into the area and all looked good. Apart from three or four single bleeps during the hours of darkness the alarms remained silent. Which is more than can be said for the coots. 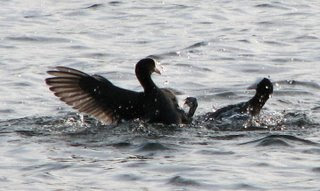 The lake is certainly waking up. Not only are coots sitting on eggs (when not squabbling amongst themselves) the swans and geese are nesting too. The cuckoo was calling at dawn each day and the hobbies are back in town. In the water the invertebrate activity in the margins has increased, so I assume the fish activity will be doing the same.

I have to admit that after moving for the final night I did spy some tench bubbles at one point. What looked like a couple of fish moving through a bay. I had a cast at them, and would have moved if they hadn't been moving through so quickly - and I hadn't already put the last of my bait in for the night.

Not much (if anything) was caught at my end of the lake while I was there. So maybe the bulk of the fish have moved with the change in the temperature. It was t-shirt weather at times, and the rain was that summery sort that doesn't make you chilly and soon dries from the grass.

Two good things to come from the session were the upgraded plumbing rig, and the foamed baits. I'd noticed that after very little use the cork balls between lead and float were getting damaged, mainly by the clip on the end of the line. Opening up my pike box to find a hard plastic bead to act as a buffer I spotted my bait poppers. Two birds, one stone. They could replace the cork ball and alleviate the need for a plastic bead - as they are hollow hard plastic. I also cut up a single leg rod ring and added a snap link to it to provide a hi-tech run ring. Knowing my luck it will crack, but I'll stick with it for the time being. 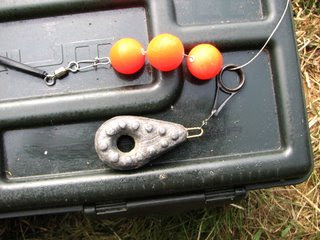 The other step forward is one I've been trying to make for ages. I'd seen PVA foam used on his hooklinks by Terry Lampard in an issue of Coarse Angling Today a couple of years ago. Unfortunately it wasn't the issue in which he'd explained how it was done and it looked like the stuff had been sliced and the line slotted in to it. I tried that and it failed - the foam flying off on the cast. Then last week I had a blinding flash of inspiration. If you can call it a flash when it took two years to happen! I'm sure this must have been written about a million times, but I obviously read the wrong magazines. Take a piece of foam, lick one side of it, fold it round the hooklink and hook point and squeeze. The damp PVA sticks to itself and the lump stays put. 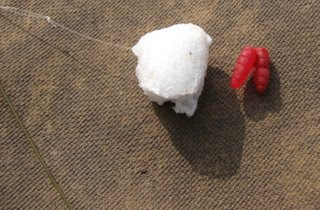 Much better than fiddling about putting the foam chunks in PVA stocking. D'oh!