The last rolls of the dice 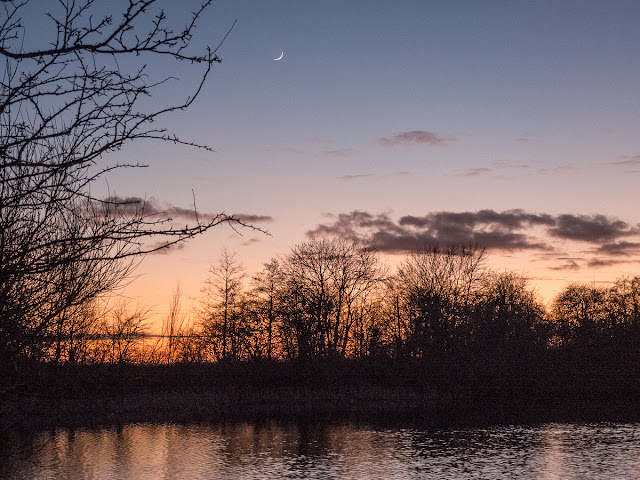 It's always the same, I get my fishing head on and 'life' intervenes. For reasons I can't recall now, but I think involved rain, wind and work related issues, I didn't manage to keep rolling after the session outlined in my previous post. Eventually I snapped and thought, "Stuff work", and in autopilot headed for the swim I'd caught from last time out. Even though conditions told me I should have fished a different swim where I could have put the drifter to work, and knowing lightning doesn't strike twice, I fished it anyway.
After an hour of inaction I moved to fish the opposite bank. It was a grand day to be out, sunny and breezy and almost mild. The move had done me no good after another hour so it was off to a last knocking swim for the last of the daylight and a while into dark. I'd made some new floats which take Starlights just for this dusk to dark period. Why I bother carrying on once the light has gone completely I really don't know. The last half hour of daylight often produces a take, but nothing has yet happened any later. Still, on a mild late winter/early spring evening it's no hardship to stop around.
True to form the failing light did the trick. I had one bait on a spot that has been good to me in the past, another in the wilderness and a third in a spot that has always looked worthwhile but never thrown up a pike.Until this time! I sprang down the bank like a gazelle when the sounder alerted me to the take. A gazelle whose left knee gave way as it reached the rod. I was trying to stop myself toppling into the water as I picked the rod up and wound into the pike.
Like many of the other pike I'd hooked this winter this one just tried to hug the bottom, only coming to life on the surface then lying in the net while I limped up the bank to sort out the scales, sling and mat. Lifting the net from the water the fish did what others had also done this winter. Spun itself madly, this one spinning itself out of the net...
Somehow I managed to haul it safely to the mat where I saw it had unhooked itself. After unrolling it from the mesh I slid it into the sling which I hoisted up on the Avons. As the needle flickered between 13 and 14 the sounder box went ape again. The middle rod fishing the bait in no-mans-land was away. down the bank, dunk the pike out of the sling and wind down. To nothing. The bait had definitely been moved. in the half-light I could see where the lit float was when I retrieved it, but the bait looked unmarked.
After recasting the dropped bait I sorted out the chaos which had been created by the spinning pike and the second take. And prevented me taking a photo for comparison with other captures. That rod got recast and I was expecting more action despite it now being completely dark. I should have known better. Stop at the chippy on the way home to celebrate.
After that hectic few minutes I was itching to get back. yet again reality bit and I simply couldn't manage it. I had it all planned the following week. I'd go Tuesday. It was a nice enough day but blowing a gale. No worries. Thursday would be calmer. That would have worked out great if the UPS van had turned up on the Wednesday. As it didn't the collection was rearranged for Thursday. That would be OK if it turned up nice and early. By four it still hadn't shown up. I was told it could arrive up until six. It didn't. Bang went that week.
When I got a hospital appointment for last Tuesday I knew the day would be pretty much a write off (and I certainly couldn't book any dubious UPS collections) , so planned to fish that afternoon/evening. Even so a still, sunny and unseasonably warm afternoon didn't feel particularly pikey. Time was getting on and I almost ditched the idea. Then around four I got the urge. It was so last minute I forgot to take the pack-up I'd got ready! By now it was stopping light until almost seven, so getting a bait in the water by five fifteen still gave me a couple of hours. One thing moving swims regularly teaches you is that one hour in the right spot can be plenty. I could fish two swims in close proximity to a likely springtime feature. 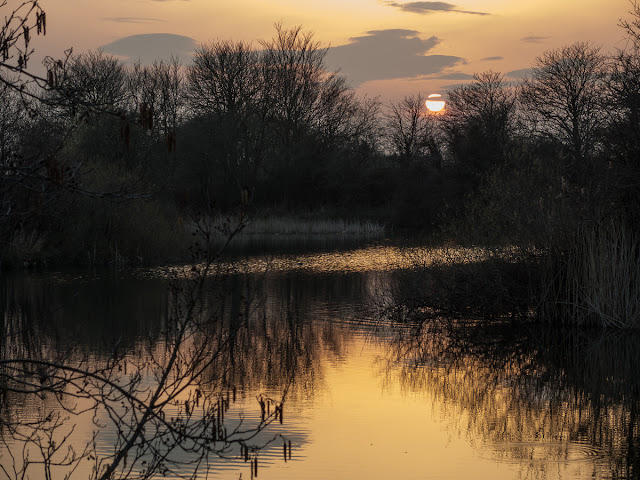 This winter I've been enjoying using three P-4 rods. 10 feet is plenty long enough for small water piking, and they are well capable of playing and landing any pike that swims. For casting sardine-size baits and swinging larger baits into the margin they are fine, but there are a few spots where I like to punch a decent lump of mackerel out a fair way. This is where my P-5s performed better. Always a sucker for trying blanks out I eschewed the option of using a P-3 (which I knew would do the job) and got myself a 1ft 3lb Torrix blank to try. Last week I'd thrown some rings on it and fitted (but not glued) on a reel seat. It wasn't rigged up but I'd put it in the quiver with an old Shakespeare Sigma reel attached.
In the first swim I'd cut the trace off one of the P-4s and rigged up the Torrix. With the head half of a decent sized mackerel on the hooks it felt like it should cast it well. It did. A season or two back I'd tried a 1ft 3.25lb Torrix and didn't like it. It felt a bit 'dead' to me. The 2.75lb ten footers I use for eeling feel much more lively, but the tips are much softer than on my P-4s and they aren't up to piking in my opinion. Better suited to casting leads and worms - or boilies - than lumps of frozen fish.
In the second swim the Torrix was used to swing the macky head to the same spot I'd unexpectedly caught from on my previous visit. A smelt and a lamprey head were fishing close in to the reeds I thought pike would be lurking near at this time of year. But at twenty to seven it was the float on the Torrix that started steaming away from the bank. After a fortnight my knee was more sturdy and I had no fear of a soaking.
From the off this fish felt heavy. It was doing the bottom-hugging thing and took some hauling to lift it up in the water. This gave me a good chance to take a look at the fighting curve of the rod, which felt more 'lively' than its heavier sibling, and it looked fine. More tippy than a P-3 or P4, but not too 'carp roddy'.
When then pike did surface it was broad across the shoulders and long looking. Could this be the monster of the pit? Coming towards the sunk net it woke up, shook its head and thrashed about, tried to make a run for it, but was turned easily enough to slide quietly over the net cord. resting in the edge it looked big enough for me. This time I wound the other two baits in and hung them from their respective Delkims. I didn't want a repeat of the fiasco I'd endured a couple of weeks earlier.
Unusually there was no wild spinning and tangling from this pike as I lifted it from the water and laid it on the mat. On dry land I could see that it was looking a little ragged, and quite lean. I reckoned it had spawned. Looking in its mouth as I quickly removed the trebles it appeared to have been hooked before. Maybe it was the pit's monster. The scales told the tale. Two weeks and two pounds too late. I wasn't complaining. It was still a pike worth catching, and it's not as if I haven't caught a twenty pounder before - even if it is a long time since I last had one in my weigh sling. After a couple of snaps of the pike on the mat, with the new rod and old reel next to it I slipped her back and watched her power off into the gloomy depths with a couple of sweeps of her tail. 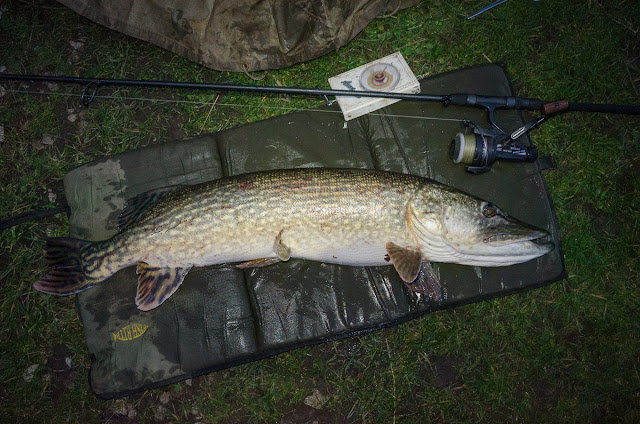 I was tempted to pack up there and then, but it was almost seven by the time I'd recast all three rods, so I might as well listen to The Archers until quarter past and leave then. Which was just what I did.
Two hours fishing and the biggest pike of my winter caught. Not a bad result. When I got home I totted up my stats for my piking since the start of the year when I got the bug again. Only eight sessions, all fairly short, were managed despite wanting to put more time in. Only one was a blank, which was pleasing and I had a dropped take on that one. After the previous two winters which hadn't fired me with enthusiasm, and had me worrying the pike had gone to the otter feast in the sky, it was good to have the average size up too. With the two smallest pike I caught weighing eight and nine pounds the average size was over ten. Nine doubles from eight short sessions also made it succesful in terms effort for reward. All that without getting up early or travelling very far suits a lazy old git like me.
Time to leave the pike alone now. But what to fish for before I start eeling? I really don't know. I might be reduced to fishing for... No! Someone stop me, please!!!
Posted by Dave Lumb at 8:41 pm