When you're on a roll

Knowing that the weather was set to turn wet for the weekend and that I'd have no time to fish next week I made sure I got a session in this week. Luckily the UPS van turned up nice and early on Thursday so I was able to get a decent length session in. I was going to fish into dark anyway to spin it out so I filled a flask, something I've not bothered doing recently just to keep the weight in the rucksack down. Fred was grateful for my effort. 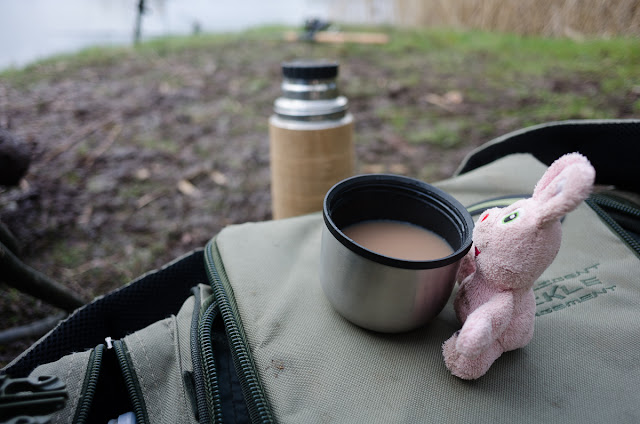 I wanted to give the drifter another try out, so made my swim selection with that in mind. With a bait out close in to my left and another a bit further out to my right I started drifting. Looking at the chop on the water the float should have headed straight for an ice feature I could have inched it back from. What the wind looks like it'll do to a float rarely turns out to be what it actually does. 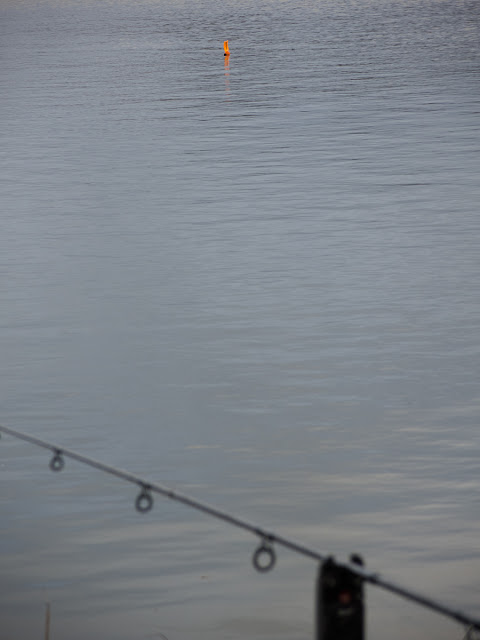 Instead it spent a lot of its time blowing the drifter towards my right hand float. Eventually the wind swung a bit and I got the float just where I wanted it. Then the left hand float dipped and started to move off. When I got to the rod the float stopped moving. I have a suspicion that it was my clod-hopping tread that disturbed the pike. I checked the bait and swung it back out, a little further along the margin this time.

There's been heavy overnight rain which had made the banks muddy and slippy. The more I trudged around the swim the muddier it got and my boots were soon caked in clag. 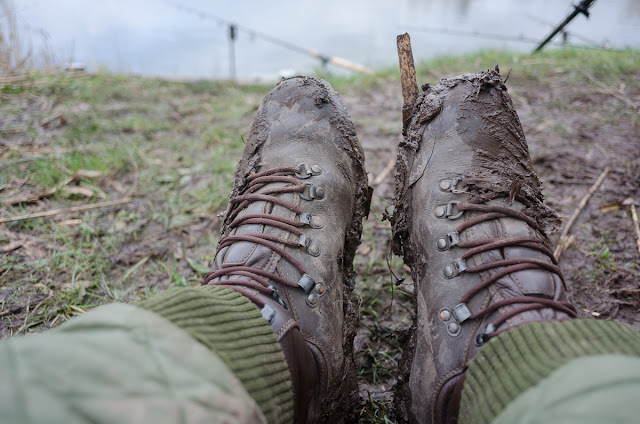 Not having felt the hooks I had a feeling the pike would still be hanging around and up for a second bit at the lamprey head. For once I was right! This time the float kept moving and I connected. By the time I'd netted, unhooked, weighed and returned the fish the drifter had gone off course and was round the back of my right hand float. 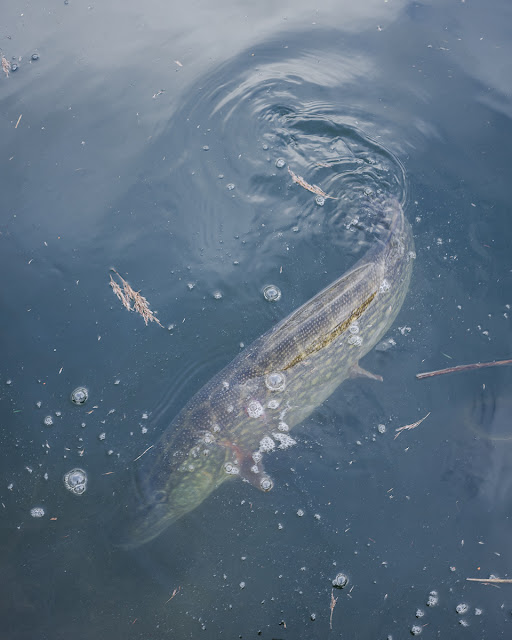 It took a while to sort the mess out but at least the wind was taking the drifter out nicely by then. I was pretty confident of more action but none came my way. With an hour and a half of daylight left it was time for a move, and a switch to three static baits to take me into dark. The new swim was quite sheltered from the chilly wind and offered me three nice locations to place baits. It was, however, on a bit of a slope. A bit of a very slippery slope. Moving the rods I felt my feet lose grip and with as much grace as an ice dancing superstar I dropped the rods and pirouetted round to keep myself upright.

After a while I'd worked out where the safest route round the swim was in case I had to leap to the rods to deal with a take. The knowledge only came in handy when it was time to wind the baits in and go home. 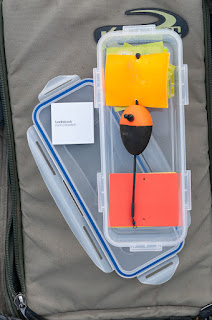 I had a lot to do on Friday, but I was still itching to get back for more pike action. And to have another play with some floats I'd made for fishing into dark. Unusually I managed to get my jobs done in good time and was looking for a swim by two. Ideally I wanted the wind behind me but it had swung through almost 180 degrees overnight and I couldn't find a spot that would give me both a good drifting line and let me put bottom baits where I felt confident. One of my jobs had been to buy a clip-lid box to put the drifter in. It did a good job while it languished, unused, in my rucksack.

For some reason the swim I was in, with the wind blowing in to me at a slight angle, felt right. Slowly retrieving the far mackerel head a decent looking pike turned behind it about a rod length out. That made me think that a drifted bait might have scored if all the pike were as active as that chaser.Even so I resisted the urge to move. Instead I took the float and leger weight off the rig and cast the mackerel had around the swim for a few minutes. It looks strange, but I've caught on 'wobbled' half baits before. When the pike didn't reappear I reattached the bomb and float and recast it a bit further out. I'd barely sat down when the float was away.

Winding down I felt the fish. Then it came adrift. Winding the bait in I could see the trace had got round the top treble and the points were facing backwards. Bugger. Never mind, that could have been a different fish. My confidence rose another notch.

It was about an hour later the left hand float, which had been drawn back a few yards from where it had been cast, wobbled over and the line went slack. When I picked the rod up the float was moving away steadily. This one got hooked. Then kited into the reeds. Back in open water it stayed deep then made a run from the net. Time to get the mat, sling and scales out. Laid on the mat for a snap I could see from the patch of what look like regrown scales behind the gill cover that this was a repeat capture of a fish I'd caught last month. It had lost a couple of ounces - although that could be a weighing discrepancy. 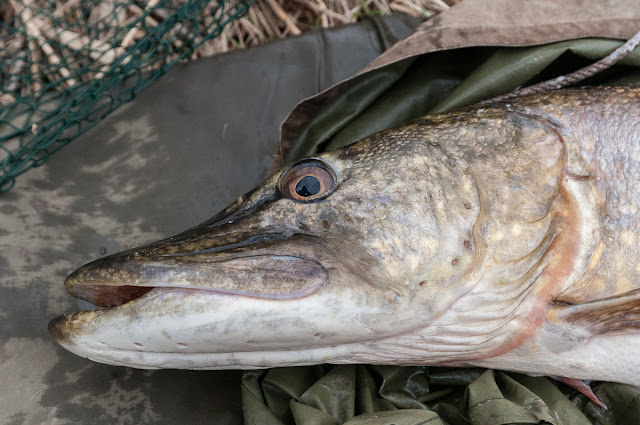 Being unable to think of a better swim to move to I decided to break with my usual habit of moving regularly and chose to stick it out in this one until I'd had enough. It seemed like I'd made the right choice when the right hand margin float began to behave oddly. It was just moving away when I got to the rod when... It stopped moving. I'm becoming convinced that when fishing these margin baits a rod length away I am running the risk of spooking pike as I approach the rod. Again my thinking was that the fish hadn't felt steel so might come back. There wasn't enough time to move swims before dark fell anyway.

The sun was low and casting a warm light on the reeds when the right hand float made off more confidently. When I set the hooks I could feel that the pike was somewhere in the submerged willow branches. Once out of that potential tangle area it fought pretty well, but not being a monster was soon laying on the unhooking mat. Not a fish I recognised this time. This rig was the one I'd had the drifter on and instead of my usual quick change lead set up I'd simply attached the bomb to a paper-clip through the top eye of the trace swivel. Coming through the branches the paper-clip had done it's job as a weak link and the lad had gone. 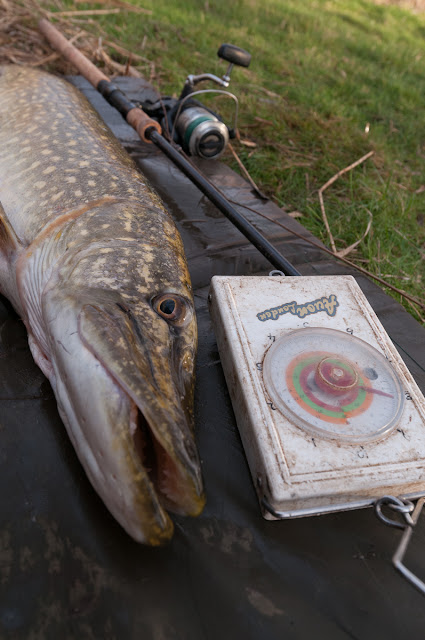 After dark I felt like there might be another chance but after half an hour that feeling had left me, so I left the pike and the pit for home. I've caught a few pike from this place which have required the use of a headtorch for me to see what I'm doing when unhooking them. Stopping into dark hasn't paid off though. Maybe I need to stop more than an hour after sunset? Or maybe the pike don't feed in the dark. Having caught one when eel fishing in the dark I'm not too sure. I might give it another try when I can get back. It would allow me to make later starts and have a decent length session when the UPS van doesn't turn up early.