I've never considered myself to be obsessive, but when doing something takes my fancy I to tend to get focussed on it for a period. That's why I was back with the lures, specifically the topwaters, yesterday. Even when pike miss a surface lure it gets the adrenalin flowing! 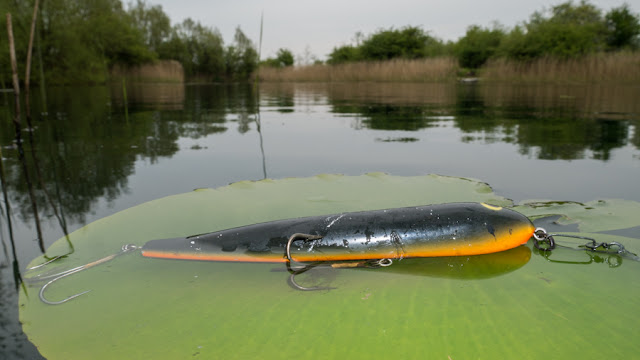 It was straight in with the 'Blackpot' and after my previous experience I wasn't going to spend much time in each spot. Takes had come to the first few casts. If there was a pike in the swim it would probably have a go early rather than late. Had I been turning bigger fish I would have used a surface lure to wake the pike up and strike or not followed that with something more subtle fished subsurface.

Sure enough the pattern was repeated. Nothing in the first swim, move. The second spot let me cover some of the same water plus some more. First cast to a new area and boom! At first I thought the pike had missed as the take was early in the retrieve on a long line and I didn't feel anything. As I tried to regain contact with the bait something pulled back. Not very hard, but it pulled back. Another jack. 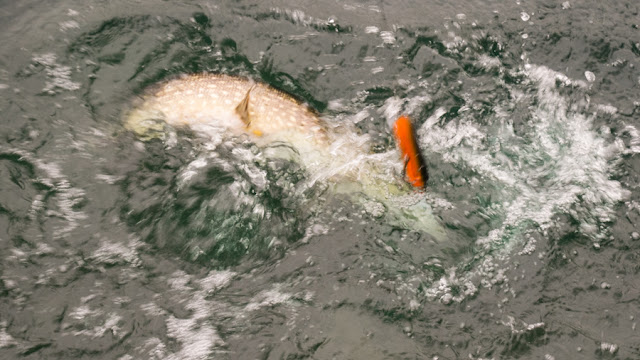 A few more casts to spots I hadn't covered and move again. Nothing in three more swims then a corner swim. It might not have been the first cast through some pads but it was second or third. The easterly was making long accurate casts tricky. As the lure came in to open water it was hit. One headshake and the pike was gone. A few more chucks and move again. Nothing. Two more likely looking spots produced nothing so into another one.

First chuck and a jack tried to eat the lure just as I was going to lift it out of the water. This one was determined, if inaccurate! Three more failed strikes followed over the next few minutes before I let the lure rest on a short line at the end of a retrieve. With the lure static the pike's radar served it better! No monster for sure,and as skinny as a snake.

On my way to the next swim I disturbed a roosting tawny owl. The birdy highlight of the evening, with a family of a dozen small mallards in second place. Sedge warblers and whitethroats noisily noticeable, temperatures rising and hawthorn starting to bloom means spring is here at last.

Yet again the first cast stirred a pike into action. This one got hold briefly before dropping off. Possibly the biggest raised of the evening. Two more pikey looking spots produced nothing so I tried another which had a number of interesting looking places to work a lure past. Sure enough one saw a two pounder launch itself at the lure on its firts pass. And its second. Then again a few minutes later after I'd given it a rest. A long cast to another spot and straight away a pike of fur or five pounds cartwheeled behind the bait.

The light was starting to fade as I dropped into the final spot for the evening. First cast, you guessed it. As the lure came into open water it got hit. A couple of headshakes and it was gone. Not to return. They rarely do once they've felt steel. That was it. Another short, fun session. My usual reaction to this kind of fishing is to start taking more lures and gear, and more often than not getting worse results. I do need a better container for the lures though. I'd ditched the bucket for a lidless storage box which I thought would stand up better in my mat/sling when its strap was slung over my shoulder. It didn't. A couple of times I had lures all over the mat.Whatever container I end up using I will not be putting any more lures in it. None.