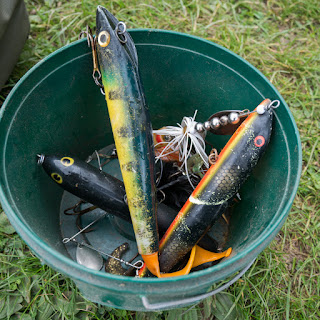 Daylight hours must be a trigger for me getting the urge to wet a line because after tea yesterday I picked up a bucket of lures, some unhooking tools, a rod, net and unhooking mat and set of to throw the lures in some water. It was the first time I'd felt like fishing since early February and my longest break since the close season was abolished.

Two Burts, one floater one slow riser, a spinnerbait, and in-line spinner and a jackpot would cover most eventualities for a couple of hours on a shallow venue.

The main reason for the session was to play with a new lure rod. The reel I put on it hadn't been un a rod for a loooong time. So long that it must have got a bit dried out. The drag was stuck and there was a hideous screeching noise on every cast which the usual dunking in the water didn't shut up. After half an hour or so everything settled down and peace was restored though. 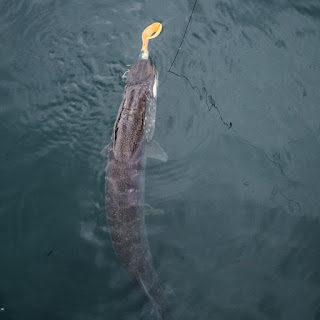 The weighted Burt and in-line spinner were ignored in the first two spots I tried but half way through the first cast the Burt was smoked by a fish that didn't test the rod, or the drag, at all. It was a start though. A couple more casts then on with the topwater. A dozen feet out on the first retrieve and a fish a little larger than the one I'd landed blew up behind the lure. It didn't have a second try.

It's a long time since I've cast a lure in anger but it didn't take long to start remembering the little tricks and techniques. Things like casting long so the lure is well under control as it comes to the place you think will be the strike zone.

Nothing to either lure in the second spot. I'd decided that a silhouette bait was the best bet in the overcast conditions and abandoned the bladed lures.

I bypassed another swim which looked a bit barren in favour of a more featured one. That proved fruitless so I backtracked. A long first cast to some pads and something hit the topwater lure as it came into open water. It felt like I'd hooked a couple of the pads the resistance was so slight. It turned out I'd foulhooked a jack of about a pound, which I consider letting swim around for a few minutes to see if one of its big sisters might be hungry!

Another long cast to get the line laid better on the spool and as the bait came past a bankside bush a better fish did a spinning dolphin impersonation behind it before finishing off with a belly flop. It's a long time since I had so much surface lure action and had forgotten what fun it can be.

A shorter cast, more in hope than expectation, and when the lure reached the same spot the pike made a better job of things and nailed it. Still no test for the rod it was a fish that might have made double figures pre-spawn. 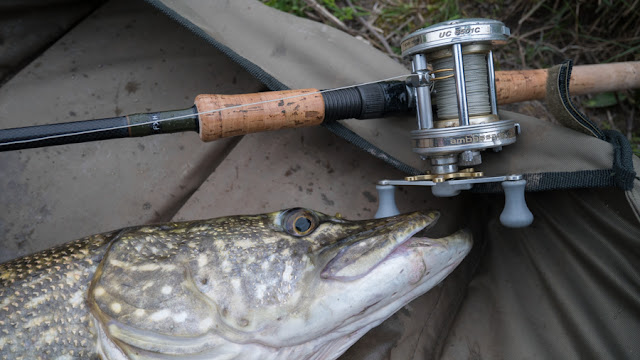 Time was getting on by now so I made one last move to a swim where I could cover a few features. It was to no avail. Two hours fishing, five strikes and two fish. Travelling light with minimal gear and a camera in my pocket. Not a bad way to spend a spring evening with the trees greening up and the chiffchaffs on repeat. I might do it again!

The rod is one that looks nice with it's woven finish but I'm not sure adds anything other than that to the ones already in my range. I did find it really nice for fishing the Jackpot though. There's enough 'weight' to let the drop of the rod tip do most of the work for walking the dog, and it's stiff enough for working the floating Burt too. I'll be leaving it rigged up with the bucket beside it and grabbing a few more short sessions I think.