No Sleep Till Breakfast

I was going to put in an overnighter on Monday night, but it started raining when I was going to get me gear sorted out. Tuesday night would do. It rained after I'd got most of the gear in my car. Then the sky brightened and off I went. The temperature had dropped from my previous session but even a north westerly wasn't too chilling. I still fancied having the wind off my back but nowhere like that at Peacock Pool looked inviting. Eventfully I got set up with the brolly at an angle to the rods where I could just about see my rods from the bedchair. 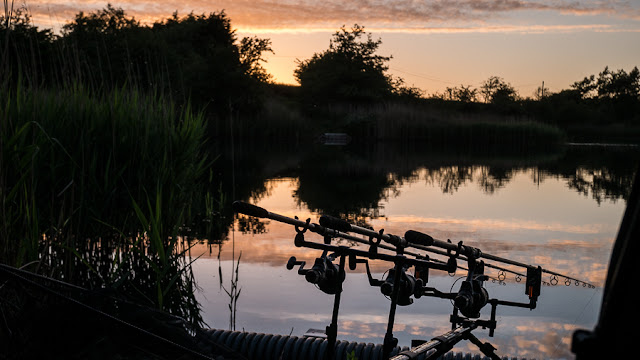 As the sun set the wind died right away and the sky cleared. The crescent moon was so bright that it cast a shadow. The incessant bleeps and blips of the previous session were notably absent. The first take I had, just before ten, to a deadbait, was a proper run. I still failed to connect. This didn't signal the start of more madness. It was fifteen minutes before the next run came. Which was also missed. After another quiet thirty odd minutes I connected with an eel to the off bottom worm. It fell off. The eel that picked up the left hand deadbait at eleven stayed hooked all the way into the net. Not one worth sliming up the weigh sling, but a start.

A combination of the slower pace of activity and the conditions made me think that there was a chance of a better than average fish. When the bootlaces are playing the bigger eels seem to get beaten to the baits.

It was still frustrating. I'd miss a run. Recast. Then sit waiting for action. When I gave up hope I'd curl up under the bedchair cover. The eels seemed to know when I was getting snug and starting to nod off. I'd leap out to the rods and miss another run. Rinse and repeat!

So it went until ten past two when a deadbait on a longer chuck was tearing off. Half way in it began to bulldog. It felt pretty reasonable as I held it on a tight line while I fiddled around trying to switch my headtorch from red to white without it flashing red. Safely netted at the second attempt and the sling and camera were going to be required. I didn't feel like a wrestling contest so I put the fish back after a couple of 'sling shots'. 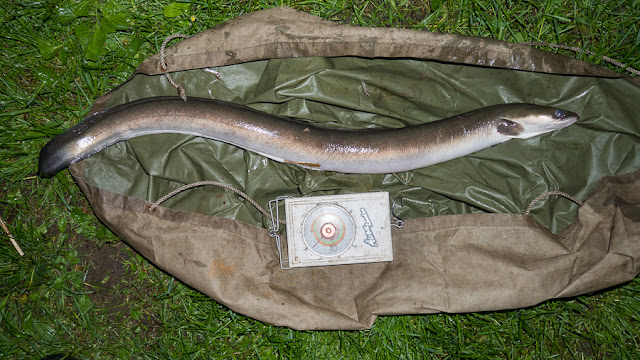 With a fresh bait out I got an hour's rest before the takes picked up frequency again. By then the sky was showing some light and a sedge warbler woke up. Soon the dawn chorus began in earnest, accompanied by the occasional distant cock crow. The takes became less frequent. Not expecting any action once the sun was in the sky I began to tidy my stuff away. Then I had two runs in quick succession. Which I missed. Of course.  Quarter past five would be home time.

I was well knackered as I pushed my barrow load of gear back to the car. That's the trouble with all night eel fishing. It's often impossible to get any sleep unless you don't bother checking to see if they've pinched your baits when you get a dropped run!

What had been encouraging was that the takes were peeling line from the baitrunners, even with the rod tips at an angle to the baits. Like most fish, I suppose, even eels have days when they aren't bothered by resistance. Or is that a myth?

The sun was rising casting it's beams through the mist swirling off the water promising a warm day to come. It'll be meteorological summer tomorrow. So it'll probably snow. 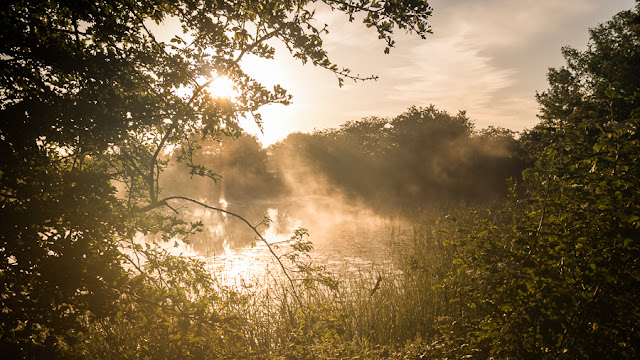