There wasn't much rain forecast for Thursday night, which seemed like a pleasant change, just some showers from 3.00 on Friday morning clearing to sunshine. There's around eight hours of darkness now giving plenty of time to be disturbed by run after run from those frustrating anguillas. That was the plane. How many times do I say that? Roughly as many times as things turn out completely differently.

Following the warm walk to my chosen swim, one closer to shallower and weedier water than last time, I took my time getting set up. With no rain around the rods got baited and cast out before the bivvy was erected. A perch head cast to open water and the tail section dropped over the marginal weed. I also stuck a third rod out for whatever might pick up a dumbell shaped wafter over some hemp and corn I's had in the freezer. The kettle had boiled when the line tightened on the sleeper rod and the bobbin held tight,. That was all. I pulled the bobbin back down and returned to my brew.

There are still flocks of swallows visiting the water as evening sets in, and that chiffchaff hanging around, but the swifts are long gone and I haven't seen a tern for ages. There's just one juvenille grebe following its parents around, despite being able to dive itself and the two late mallard ducklings are growing fast. Signs of fish were few and far between. Something that might have been a tench splashed a couple of times, and tiny fish dimpled the surface. Any signs of bubbling were concealed by the ripple from the strong westerly. 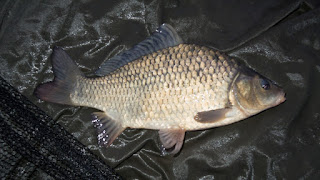 In readiness for the night I decided to recast all three rods before it was dark enough to need the headtorch. When I picked up the sleeper rod it felt like there might be something attached to the hook. Probably weed. Strange weed though. It started to pull back. At first I imagined it would be a small tench. Then I caught a glimpse of some scales and hoped for a big roach. Once in the net in the dim light I almost took it for a decent crucian. But something wasn't right. This must have been the fish that gave the indication. It must have got hooked and then weeded itself. Or maybe it thought it was a bream and just sat there pinned to the lead!

The sky was clear, the almost-full moon bright and the air temperature falling. I wasn't too confident but if those showers arrived things might improve with the cloud cover. They didn't. It wasn't cold, but it wasn't muggy either. I pulled my fleecy cover over me and got some sleep. Just two single bleeps, one to the far deadbait the other to the wafter, were the only times the alarms sounded. Despite the conditions you can usually count on eels keeping you awake with their dropped takes and aborted runs. Annoyingly unpredictable creatures. 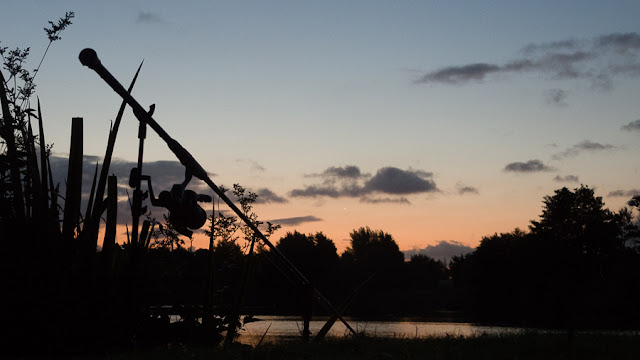 The wind had eased a little during the night, and swung to the south. The sky clear by dawn. Around five thirty I was up and about swapping the eel rods over to fish fake corn and a pop-up close in over some more hemp, corn and pellets. The wafter rod got recast and the swim rebaited too. 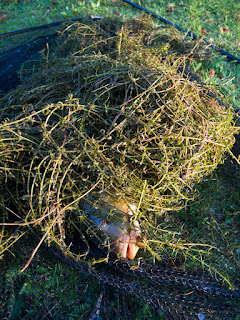 It wasn't long before the temperature was rising with the sun which seems to move more quickly across the sky these days as autumn approaches. Low and bright that sun had forced me to dig out my sunglasses when the unexpected happened. A proper run to the wafter rod that nearly had it off the rests.

Everything was solid when I bent into the fish but constant pressure from the through action rod got something moving. It wasn't until I netted the ball of weed to see a pair of tench lips that I knew I'd caught something! One more of the lake's tiddler tincas. Somewhere in the region of a couple of pounds it was a short and stocky fish.

As the day continued to warm and the clouds disperse I had a repeat performance. This time the ball of weed contained a longer slimmer tench but still weighing about the same. I was all set for a few more of the little red-eyed beggars but they must have moved on because that was my lot. Once more I'm wondering what the hell to fish for before the pike call to me. probably another eel session or two then maybe some roach fishing. I really ought to drag myself back to the river.