No doubt those fancy Rollover indicators are superb for eel fishing with their infinitely adjustable 'weightlessness' and lack of a line clip. But in reality they look like a mighty faff to set up and extremely disaster prone for a slapdash chuck-it-in-the-quiver kinda guy like me. I likes simple! That's why I persevere with my home made drop-offs with their Gardner line clips which the internet world tells me are pants.

In all the years I have used them they've proved no worse than any other line clip - including the supposedly brilliant Solar clips which a lot of pikers rave about. So brilliant are they I can never set them to anything other than too bloody tight or too flaming slack! They also weigh a ton - which probably helps if you are in the majority who think drop off bobbins have to be heavy to show slack line takes. 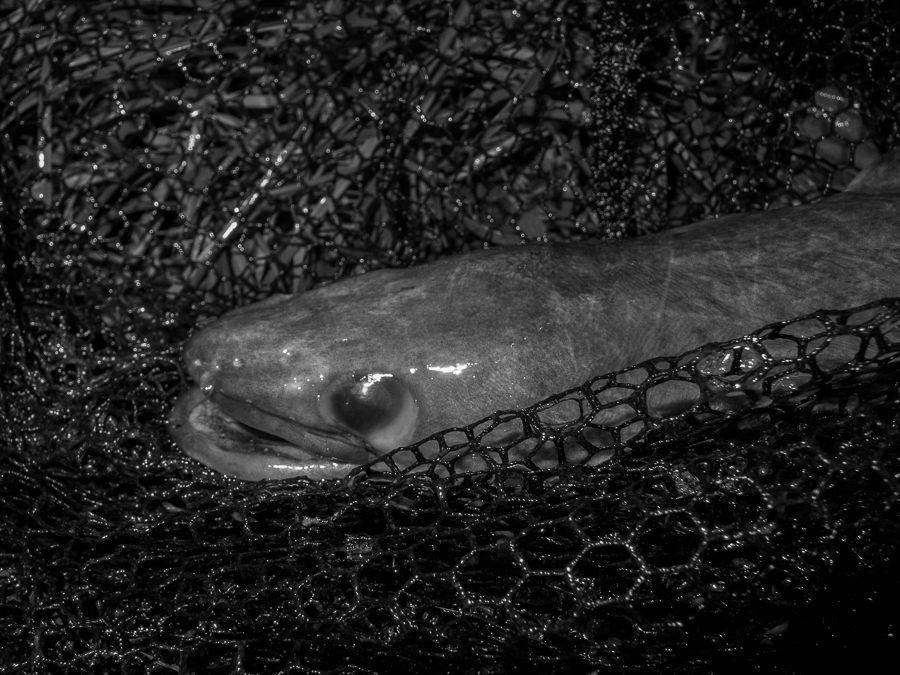 I think the trouble I'm having on this lake is that my leads aren't heavy enough because I'm struggling to get the line tight enough to the bobbins, resulting in some slack in the cord which in turn gives the eels some leeway before they feel the (slackly set) clip. Last night I had one or two small twitches which didn't develop. A couple which did develop after I pulled the line free. On one occasion the rod tip pulled down slowly a couple of times before I freed the line. Then again I had a few runs which pulled the line free no trouble and I heard the bobbin smack the pod. I might step up the lead size for my next session. Or I might give the light bobbin on a long drop and slack baitrunner method a try again.

Still, despite the usual eeling tribulations I landed three, the largest again not making two pounds and all three being long and slender. When you catch thin pike it's common to say they 'look like eels', but you can't describe skinny eels that way because they already look like, well, eels!

Despite some light drizzle on and off it was a pleasantly warm evening to be out. When I got back to the car just before midnight the temperature was still 16. No wonder I had a sweat on. Why there are people who don't like night fishing I really can't fathom. It's a great time to be by the water. The world of train, plane and automobile noise is silenced, the sounds of nature can be heard loud and clear. Carp crashing out, leaves rustling as a breeze springs up and owls in the woods. Plant scents become stronger too when the breeze dies down again and the air clears. Once night vision kicks in you really tune in to what's going on.

Then, with a bit of luck, all that is forgotten when there's a high pitched squeal in your breast pocket and the swim takes on a bright red glow as a Delkim becomes active alerting you to the mystery of how fifty pound braid can be whirring off the reel's spool so quickly, and apparently under its own steam, that you can hardly get the bale arm over! It's time to get some more bait sorted out and put in some overnighters I think.