Last time out wasn't worth blogging. A few hours up until dark for one dropped run right at the death. Then the rubbish weather set in and when there was a dry day I was tied up. Yesterday was set to be the best day of the week with no rain forecast and sunshine. The wind was the only thing putting me off. So I planned to stop in and work.

Around late morning my mood changed. Work had got done quickly and I'd sorted out a long standing problem. I felt buoyant and the urge came upon me. Even so the idea was to potter around  tidying some loose ends and fish for the last two or three hours. Once lunch was out of the way I found myself on autopilot, filling the flask, sorting out fresh deadbaits and loading the car.

After a wander around checking out swims I went back to the car for the gear and set off to snuggle up in a reed lined swim with the wind off my back. Three quarters of an hour later I was restless and soon on the move. Not far. A couple of swims along in an even cosier spot.

It was a classic bright February day. One with a faint hint of spring. The sky blue, the clouds white and fluffy, the reeds glowing in the sunlight. The only thing missing were the pike. After another forty-five minutes I was moving again to a swim I'd passed earlier which had yet to provide me with a pike. While I was sheltered from the wind the floats weren't and were soon rocking on the ripples. I sat back and poured a brew from the flask. The right hand float rocked a little too vigorously and began to move towards the overhanging willows. Cup down, rod picked up and I wind into something very solid feeling. It kites out from potential trouble staying deep and still feeling weighty. When a four pounder pops up I'm scratching my head. The bottom hook in a pectoral rood and the top treble in a branch explained it! Although small the pike was plump, and carrying a few leeches. A typical sight at this stage of the season.

The lamprey head had been out on the last session and was now washed out. I chopped another lamprey in two and lobbed the rig back to the tree line. I moved the smelt for good measure. It wasn't long after I finished my brew that I got the urge to move again. I had three choices. One really sheltered swim, one where the wind was blowing across and I'd be sheltered but the floats would take a battering, or the third where I'd have to hide behind a spindly hawthorn and the floats would be at the mercy of the wind. The second choice had given me that dropped run last time out, so it might have been worth a shot. Nonetheless I plumped for braving it in the face of the wind. There had been a few light spots of rain from a passing cloud, and although the sky was filling in it didn't look like rain was imminent. 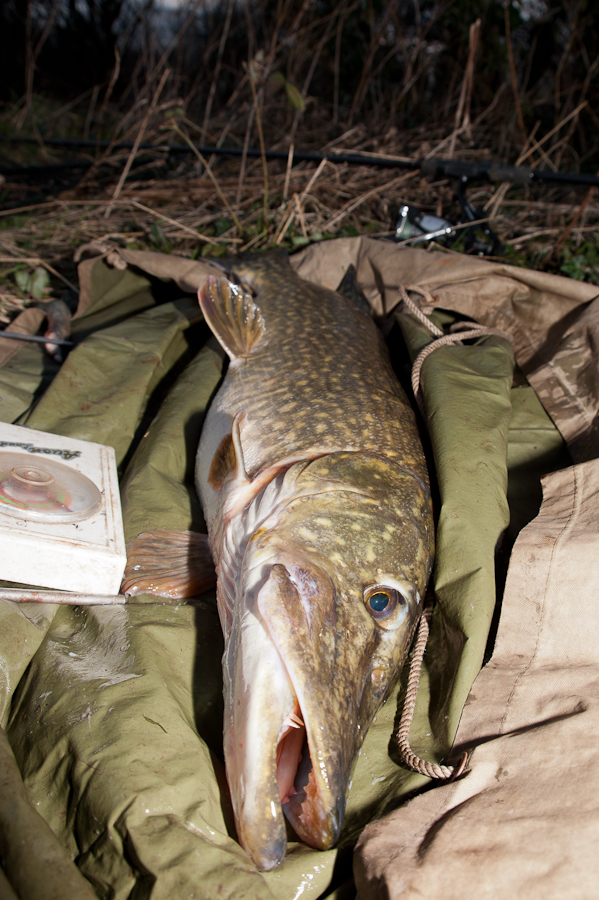 The lamprey head went out to the right, close in, the smelt further out to the left. The flask was cracked open once more. The floats were nodding away in time to the ripple. The brew was finished when the right hand float nodded and lost its balance before magically heading into the wind. The baitrunner began to purr as I made sure I didn't lose my balance and topple into the water as I made my way to the rod.

Either I'd connected with another branch trailing jack or this was a better fish. Once netted after a short but splashy fight I could see it was a double. It had been worth turning out. Thoughts of breaking out the roach gear, which I'd had earlier, faded and pike filled my thoughts. Was that it for the swim? Should I have one more move and spend the last half hour of daylight in the cosiest swim? I was tempted. Not least because my cheeks were burning from the wind and there was only one more cup of tea left. I decided to stick it out.

There hadn't been much birdlife in evidence. A couple of Canada geese, the inevitable coots and a mallard or two. Birds often keep a low profile when the wind is strong. That last cup of tea was poured and a kestrel flew overhead, a silhouette in the fading light. A thin crescent moon high in the sky did nothing to hold back the oncoming darkness. There was still enough light in the sky to enable me to see the floats on the water though. Just as the point had been reached when the colour drains from the float tops and the turn black one disappeared from view as the Delkim lit up brightly red and the sounder box burbled. This time I forgot to take care getting to the rod, but still managed to stay on dry land. I had no idea where the pike had headed when I wound down to it. To the right and out from the bank was the answer. A swirl on the surface made me think that I had something bigger than the last one on, the dangling lamprey made me want to net her at the first attempt. This I did and while she lay trapped in the net while I got the weighing gear sorted she managed to unhook herself. 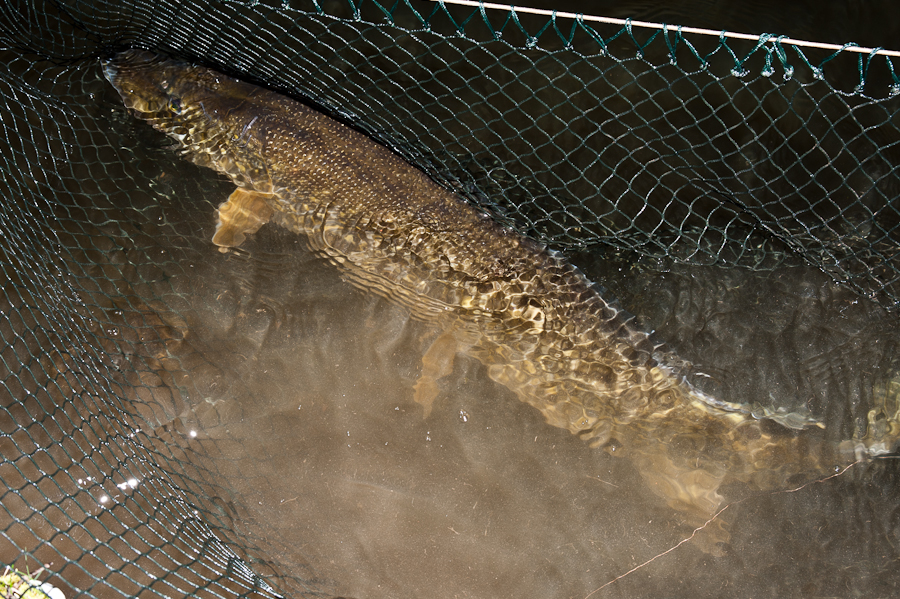 I'd been right to stop where I was. The scales revealed my biggest of the winter so far, a well filled out February pike to boot. Carrying a few leeches too. Maybe that spell after Christmas when I was struggling a bit was because the pike had gone dormant and I'd dropped on them shortly after they had started their pre-spawn feed up? Or perhaps it was that moon? I don't really care what the explanation is. I'd had a good session that had recharged my piking batteries. Here's hoping that this mild winter doesn't lead to the pike going into pre-spawn mode early like they did the other winter when the end of season bonanza I was anticipating fizzled out in a spate of micro jacks and finicky dropped takes. It might.