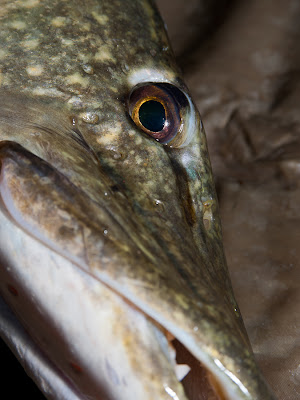 One thing about doing frequent short sessions is that you don't mind the occasional blank. More so when you are on the move all the time. Sitting in one swim from dawn to dusk, especially on a cold winter's day, can be demoralising when nothing is caught. When you move ever hour or less there's fresh hope in each swim. Not only that, but you don't have to bother preparing any food or drink if the session is only to be a couple of hours.

Of course this sort of approach is only viable on local waters which can be reached within a few minutes drive. Round here that limits the expectations of what size fish can be caught where pike are concerned. One reason I have never amassed a huge tally of big pike is partly down to the poor (in relation to other areas of the country) pike fishing available locally, and also because, when I have my fishing head on, I prefer to fish more often than to concentrate fewer sessions on more productive waters.

I could save up my free time and spend one full day a week somewhere where a twenty or bigger is a possibility, but I'd rather pop out for a few hours three or four times a week these days. It's a return to how I fished when I started piking. Only in those days I was forced to fish locally for reasons of cost and lack of transport.

A nice thing about mobile piking is fishing with floats. It does away with the bother of getting two rod rests and a bobbin set up every time I move. A lot of the time the front rests stay in the quiver and the rods lie on the ground, propped up against the reel handle.


There haven't been many cold days so far this winter, but yesterday dawned with a cold south easterly pushing into my preferred swim. A couple of hours was all I could bear before moving to seek shelter. By then the misty haze was burning off and the sun breaking through as restless flocks of fieldfares kept taking to the air.

A float dipped, bobbed, fell flat. Then nothing. The bait was checked and there were small teeth slashes in the sides of the lamprey head. Jack attack. Another move was made and the lamprey recast in the general direction it had been picked up in, the herring dropped to my left in the margin.

Watching floats is a bit like watching a tennis match. Head constantly turning from side to side. Left float, right float, left float, no float, left... Zzzzzzzzzz! The lamprey float's gone and the baitrunner spinning furiously. I'm into the fish straight away as it tries to bury itself in the reeds. Being a little un it doesn't make it. A hook catches in the net and the fish unhooks itself. The lamprey was gone so I stick a joey on the hooks and drop it same spot.

After a cup of flask tea I move the macky further out. Sitting down after the recast I spot the margin float dither briefy then stop. Again the bait is marked by tiny pike teeth. I swing it back out and it's taken more positively within minutes. Another jack hits the net.

The wind seems to have eased, or maybe swung to a less penetrating direction and the sun is warming the day. When two o'clock comes the heat is going out of the sun while I move again. A final unproductive move for the last hour is spent watching the sunset from behind the brolly I'd put up to keep the wind off me. Only my second full day pike session this winter and I'm ready to get back to the short sessions. I'd caught just as much from three moves in two and a half hours on Monday! It might be time for some roach fishing. If the cormorants haven't had them all.
Posted by Dave Lumb at 10:42 am