I thought it was all over

It was all planned out. Work Monday, catch loads of pike Tuesday, send out the last of the pre-Christmas rod orders Wednesday, catch more pike Thursday and/or Friday. It worked. As far as Monday. Tuesday I intended to fish from dawn but couldn't be bothered getting up early, so I went for an afternoon session. Despite my usual lack of success fishing for pike after lunch I'd been catching enough in the last few hours of daylight recently it seemed like a percentage chance. Things didn't work out that way and I blanked. Someone else had caught in the morning, so maybe the pike had changed their feeding habits. Wednesday went to plan, unlike Thursday and Friday which got scuppered by the promise of deliveries. Sure enough the promises were met - with deliveries after five pm. So that was that.

By now I'd lost the will to fish so I went out with my camera on Saturday. Sunday could easily have headed in the same direction when I awoke to hear rain battering on the window putting paid to an early piking start. Yes. I am getting soft in my old age! The excuse being that fishing mobile in the rain means getting wet, and I didn't fancy sitting it out in one spot all day. After doing some work after breakfast the weather looked to be improving. A check on the interwebs showed that yesterday's forecast for today of rain later in the day had been modified to no rain until after dark. I hastily sorted the gear out and set out.

It was sunny but cool in the wind so I chose my first swim based on available shelter and past form. There's something bleakly atmospheric on days like this when you're out amongst the reeds with flocks of geese struggling noisily upwind that goes hand in hand with pike fishing. 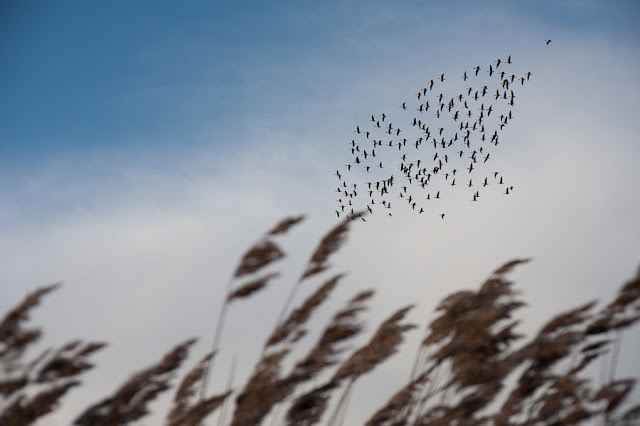 With an hour and a half of light left I was about to put the rods in the quiver for a final move when rain blew in. Up with the brolly until it passed over. There were two swims I fancied, both were free. However there was another piker in the swim next to one of them. I could have fished my first choice swim without interfering with the other chap but decided to drop in the second choice. Partly because it's a swim I've been meaning to fish for a while.


I rarely use popped up deadbaits, but that doesn't stop me messing about with ways to easily get deads up off the bottom. So far all methods have been less than successful. My latest effort is pretty straightforward. The photo should be self-explanatory. There's a loop crimped into the end of the wire to allow it to be pulled through the bait with a baiting needle of some sort. The pop up float is held in place with a pellet stop. The bait certainly floats vertically on this rig, rather than flopping over as with my last hopeless rig. Not that pike are likely to be bothered! 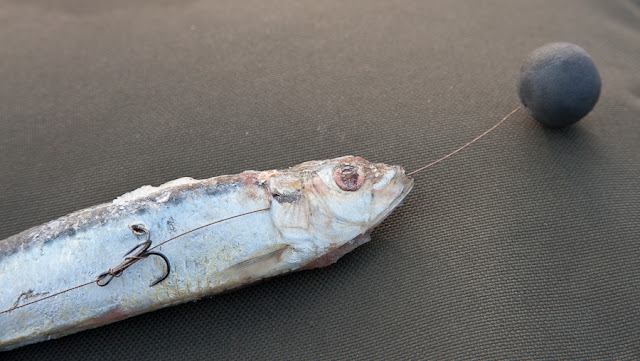 This bait was dropped in the margin in my final swim while I chopped up a fresh lamprey to use on the other rod. With that baited up I wound the herring in and chucked it further out to the left while the lamprey head section was dropped close in to the right. Things were looking grim given that evenings might have switched off. I sat down and got the flask out. It was warmer in this swim, being sheltered from the strong wind which was blowing from the prevailing direction. The tea was poured and the flask closed. I hadn't taken a sip when I saw the right hand float on the move.

I tip-toed to the rod so as not to disturb the pike and cause it to drop the bait. Then I wound down to feel the weight of the fish. An unspectacular fight ensued with the lamprey hanging from the scissors. In the net the flying treble tangled. It seemed like a good idea to flick the other hook out of the pike while it was still in the net in the edge. It seemed like a good idea.

Somehow the tangled hook caught one of my fingers when the pike woke up. Luckily, or not, the hook ripped out again. I left the still hooked pike in the net while I sorted out the mat, sling and forceps out.

The hook in the pike was easily removed. It actually came free when I tried to pull the lamprey off it to get a better grip on the hook shank. The pike was weighed, then sacked up while I sorted the chaos out and found a plaster for my now bleeding finger as I wanted a photo for comparison purposes as its weight seemed familiar. At this point the other angler arrived and did the photographic honours. After the fish had drifted back whence it came it was time to find a fresh trace. That done it was almost time to pack in but I gave it another fifteen minutes. Maybe the pike haven't switched feeding times after all. That suits my lazy old bones!

With the photos uploaded to my computer it was time to make the comparisons. The tail root area is always reliable for comparing pike markings. It didn't take long to identify a number of matching spots, wiggles and stripes. There were some other markings on the flank which matched too. That's the third time I've caught that fish now, from three different swims. Mug? 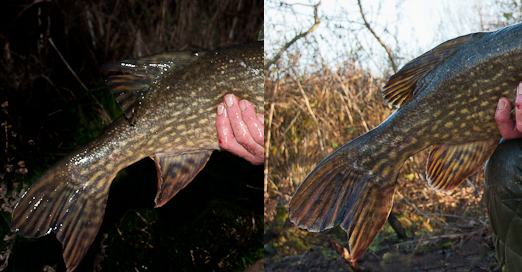