Friday's pitiful performance from the England cricket team got me out of bed early to avoid listening to the commentary and I arrived at my chosen swim in the half light with no lack of confidence, but a definite lack of landing net and chair. I understood leaving the landing net being in the garage where I had propped it up to dry, but why the chair was still in the back of the car was beyond my comprehension. I could only blame a trauma brought about by the cricket. By the time I had driven back home and returned to the car park it was daylight. I picked a different swim. Where I blanked in sunshine and  style.

On Saturday I stocked up on deadbaits and food ready for an early start and a full day session on Sunday. I think the cricket had depressed me so that seeing the heavy frost when I poked my head through the curtains caused me to wrap myself up in the duvet. Not to worry I could get out on Tuesday as there was a delivery due on Monday.

Monday I got up at a civilised hour and did some work after logging on to find the parcel wouldn't be arriving until Tuesday. I did some work, watched the frost melt as the sun rose higher and thought I might as well chance an afternoon session. even though I never catch pike after two o'clock in the winter.

I made sure that I wouldn't be sat in the shade and got blinded by the low sun and it's reflection off the water. I was warm though! By three the heat was going out of the sun. I opted for a move. Moving around when piking always used to be anathema to me, but I've got itchier feet as I've got older. Sometimes it pays off with a pike, sometimes it doesn't, but it always stops me getting bored and packing up early. By the time I had the baits out in the new swim there was just over an hour of daylight left.

Having always fished open bale arms for pike whenever possible this winter I'm fishing off the baitrunner. As I mostly fish with semi-fixed leads these days it seems that the slight resistance from a baitrunner isn't likely to make a pike drop the bait. The Baitrunner 6000OC can be set really slack. A little too slack when there's a bit of a blow on the braid. Time will tell. It's a lot easier to cock the bottom end floats off the 'runner than when using a clip or drop-off.

It was going to be near enough dark by quarter to five, so I got everything stashed by half four. I'd refreeze the lamprey that was on the margin rod and sling the joey in. The latest packet of joeys I bought have been pretty soft. So soft I have to tie them to the trace. 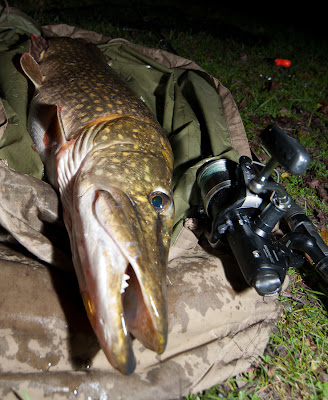 With the light fading fast I switched the remote sounder off. It was dark enough to watch for one of the LEDs on the Delkims to alert me by lighting up. Much to my amazement that was exactly what happened. Pike don't feed at dusk! The margin float was wobbling about and slowly moving away from the bank.

One thing that I have noticed when fishing off the spool is that it's much easier to set the hooks as there is absolutely no slack to take up. Especially so with braid. The rod's already pointed at the fish when I turn the handle to engage the reel and by the time I've done that I have contact and can pull the rod back to finish the job off.

That done the fish plodded around under the rod tip before making a decent run to the right and splashing around on the surface. It was soon in the net where it lay quietly while I unpacked the mat, sling, scales and camera.

I couldn't be bothered setting up the tripod in the dark. A couple of shots on the mat would have to do. The angle of the photo above  makes the fish look quite skinny, which it wasn't. The fish was returned by the light of my head torch, it now being too dark to see the remaining float. I packed up wondering if I ought to rethink my attitude to afternoon piking. You have to be in it to win it, I suppose. Or it could be a case of doing something often enough and occasionally it'll work.