I should have known better 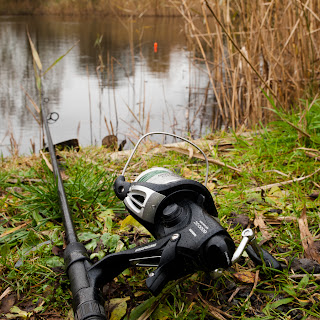 It seems like I have the pike bug again. At least for the time being. With varnish merrily curing and the afternoon warm and dry I gathered the already prepared tackle, threw the right bag of mackerel in the cool bag and headed off for an afternoon session. More in hope tan expectation, but you never know if the pike will break their habits and feed after lunch.

No sooner had I got two floats nicely cocked than the dry afternoon turned damp. What had been an ignorable mizzle turned to a drizzle sufficient to require either the waterproof jacket or the umbrella. I hate wearing loose fitting jackets, so the brolly went up.

Autumn is most definitely turning to winter now. There are few leaves clinking to the branches. Oaks are still clad in crisp, brown leaves as they will be for some time to come, but it is only the sides of the hawthorns and willows which have any leaves on them, or bushes which are in the lee of substantial cover. I had spotted a lone fieldfare on Friday, flying high and purposefully to the north. Yesterday I once more heard them before I saw them. This time in greater numbers. Firstly a flock of twenty or so, then a group of six followed by a nervously wheeling flock at twilight. It only seems like last week when I was watching these winter visitors at Goat Lake.

The baits were moved around the swim at intervals for an hour and a half before a move for the last hour of daylight. I fancied my chances of a margin moocher as the light faded. It was not to be.

Starlings zoomed eastward followed by slower moving deliberate jackdaws. A robin sang at twilight, and as dusk fell blackbirds got rowdy before silence came with the darkness and my float tops turned from orange to black. 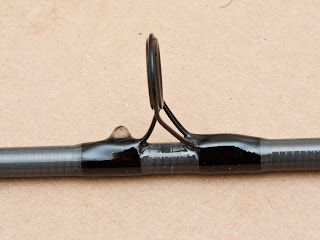 Back home I stashed the bait and gear before checking on the rod that was turning as the varnish cured. Disaster. If you ever meet a rod builder who says he never has trouble with epoxy you have met a liar! There are times when no mater how careful you are with the preparation the stuff will fail to cure, form bubbles or pull away in 'fish-eyes'. It just does.  This problem, however, was of my own making. I hadn't secured one section securely enough to the drier and it had slipped. The result was that the varnish had run to one side and 'blobbed'.

Thankfully the bulk of the varnishing I had done in the morning had been thin sealing coats, which don't require turning. So there was only the one section requiring stripping and redoing. If I'd not been so eager to go fishing for the sake of it, knowing full well I'd most likely blank, I'd have kept a check on the section and been saved the extra work. C'est la vie.