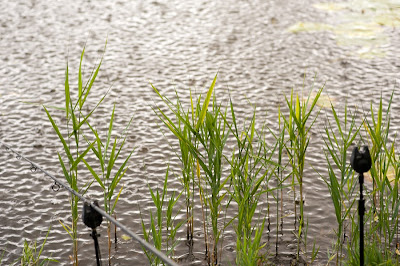 I had a couple of evening eel sessions this week while the temperatures are remaining high and my time limited. It was straight back to the frustration of missed runs.

Armed with a bucket of expensive lobworms the first session on Wednesday saw me fishing a shallow spot with baits cast over carpets of maggots on the weed edge. It didn't take long for the eels to find the worms. And so began a few hours of falling bobbins, peeling line and failed strikes.

One time I did manage to feel an eel on the end of the line when I thought a passing swan had dislodged the bobbin. On taking hold of then line to put it back in the clip I felt a sharp tug and struck. Missed again. The bites were coming thick and fast. So much so that baits were being picked up almost as soon as they settled and I gave up trying to keep count at a dozen. One recast saw me struggling to get the line in the drop-off as an eel tried to make off with the bait.

It was a warm, warm evening with no need for the fleece, and Thursday evening was warmer still with no need for a sweatshirt, even when a shower of rain came over just as the first run commenced. For this session I thought that getting away from the weed and leaving the maggots at home might find me some eels with bigger mouths, more able to manage a big lob.

The baits were both fished in the margins to start with, that first run being hit and a bootlace of maybe half a pound landed. That wasn't the start of such hectic action as the day before. Not until the right hand rod was cast a bit further out did runs started coming  frequently, but at manageable intervals. As the light faded the margin rod began getting attention until it got dark when the action ceased on both rods.

I ended up with three identically sized eels for my efforts - which was an improvement over the first session despite doing nothing differently. As always seems to be the case when fishing for eels, each session throws up at least as many questions as answers.