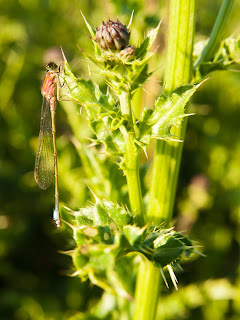 Undeterred by my complete failure last time out I was determined to give the same swim another try under different conditions. It was a proper summer evening yesterday, sunny, and warm until the sun set. The damselflies were active until late too. There were lots of them about, as many as I've seen in one place round here, flying up from the tangle of plants as I walked to my swim in a iridescent  swarm. Mostly blue-tailed in their various colour forms, but some azures as well.

The grebe chicks I first saw last week had grown considerably. One stripey head resting on each of the parents' shoulders as they drifted about.

Two eel baits were out by seven. I was sticking with perch on one rod and giving a lamprey chunk a try on the other. I've known eels get caught on lamprey when piking, so why not. If it works one lamprey will provide multiple baits. This time both rigs were fished on the bottom.

It only took twenty minutes for the bobbin to drop off on the perch tail rod and the line to peel steadily from the spool. Nothing. Another run in daylight when the sun was bright. Odd how last time when it was dull and wet I had no action at all during daylight - or dusk for that matter. I'm beginning to think this water might be worth fishing earlier in the day. A couple of hours later I had a repeat performance. Eels are damned frustratiing!

The westerly that had been blowing began to die down and a couple of fish topped. The place looked perfect. Insects were hatching, making tiny circles on the water, martins were picking them off. Midge clouds hovered over the hawthorns. Woodpigeons roosted ad the light began to fade.

I was hoping it would be third time lucky when the same bobbin fell away and the line snaked out into the lake again. It was! My strike met a firm resistance, the writhing eel that emerged from the depths looked a bit bigger than the rest I'd managed so far this season. So the scales proved. Not much bigger but a step in the right direction. 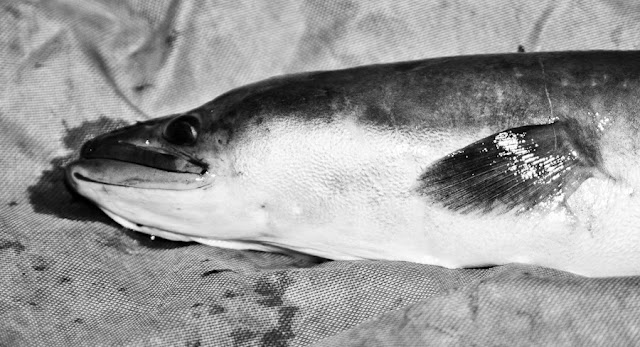 Getting action on the perch bait was a confidence raiser. Just as well as I've got more in the freezer. I cut a 'steak' out of the remaining half of the perch I'd used the tail from and cast that out. Half an hour later the bobbin dropped off again but the bait seemed to have been dropped. I took up the slack and felt a tug. I tugged back. Something began to take line. This time the strike met a very different resistance. Nothing more than a faint wriggling sensation was transmitted up the line. A bootlace of maybe half a pound seemed to have the bait wedged in its throat.

I'd been putting the repeated missed runs down to big eels being missed and coming back a few times until I hook one. Now I'm wondering if they are caused by small fish picking up the baits. Every step forward seems to be met by more questions with this eel fishing lark.

I was trying a different way of lighting photographs this time out. It didn't work. Which is why I converted the eel picture to black and white...