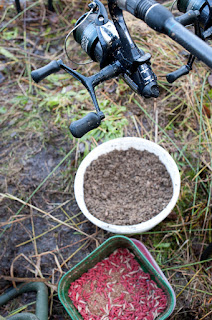 Yesterday had been drier than predicted and had me wishing I'd ventured out instead of getting on with my decluttering. Then again if I don't declutter I'll end up burying myself under junk. This is my New Year resolution come early. I can only face it in small doses though. The rain on the windows at dawn made me think I'd another day of tidying. naturally I rose late and began avoidance tactics by listening to the radio and surfing the interwebs. I even packed an order that arrived via the web knowing full well it wouldn't get posted until Thursday.

Then I noticed the sky brightening and looking at my garden pond I saw the rain had ceased. This was either a break in the showers or the day was fairing up for good. Whatever the case it was my cue to get the gear ready and pack my Christmas lunch.

It's funny how catching a few fish brings a renewal in enthusiasm. Not only was I raring to get back after the roach I'd tied up more hooklinks to stock up the rig board yesterday evening.

The roads were quiet as I drove past waterlogged fields before turning into the now familiar hawthorn lined lane to the lake. The obvious place to fish was where I'd caught from last time out. There was a niggling doubt in my mind about this choice. It seemed a bit too obvious. Still, I'd give it a try and fish a different spot next time regardless.

With all the worms gone the third, sleeper, rod was rigged up to fish a 30g method feeder and 10mm boilie. The method mix comprising the remains of the hemp and pellets with some added Hem and Hali Crush. This would also be used to top up the maggot feeders. The sleeper was to be cast out as far as it would go, the maggot feeders to fish the same line as before. 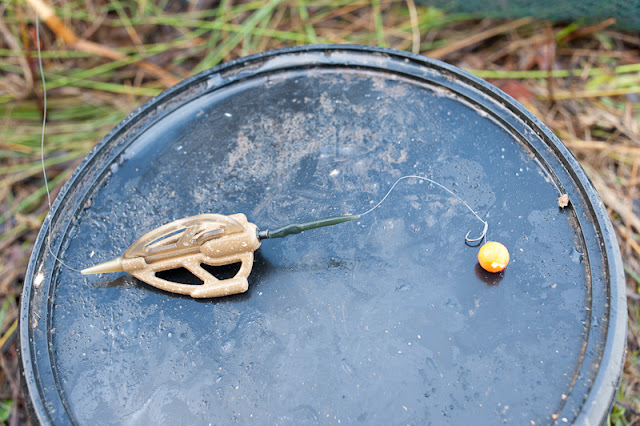 Although I'd made a late start I was still fishing earlier than any of my previous sessions. That meant I had to wait a couple of hours before tucking into my festive pack-up. 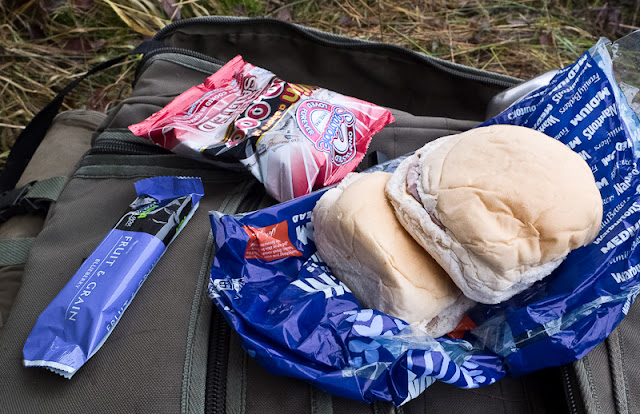 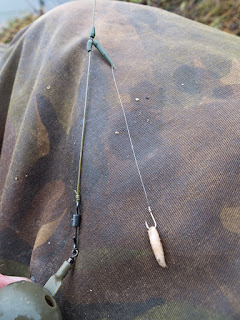 The rig that had landed the majority of fish last time had got in a sorry state. The lower float stop was no longer gripping. This gave me a chance to try out a revamp of The Rig using new components. Korum have had Ready Heli rigs on the market for some time but I only got round to buying a packet a few weeks back. They make it much easier to put The Rig together as the stops and swivel are all lined up on the one wire loop meaning it's a single operation to get the job done. I'd gone for the version with a quick change swivel and everything slid nicely into place on the powergum. Using the smallest loop tyer I have gives my hoolinks a really neat finish neatly topped off by the tapered sleeve. Even if it wouldn't impress the fish it looked good.

The sky had brightened and it was warm enough not to need my fingerless fleece mittens. A kingfisher zipped over the rod ends and round the margin of the lake. The bobbins remained static. Looking west, from where the light wind was blowing, I could see the horizon was dark. Rain was on its way. Sure enough the first few spots heralded a shower. The brolly went up in good time to keep me and my bait dry. After less than an hour the rain was passing. The sun tried to break through and tiny patches of pale blue appeared between the clouds. The bobbins remained static.

I kept the bait going in, recasting the maggot feeders every fifteen minutes or so. A grebe started to work an area to my left and about fifty yards out. I watched it pondering how rarely I see them actually catch anything when up it popped fish in beak. A roach of a size that made it difficult for the bird to swallow.

This gave me some hope despite the fish being smaller than I was hoping to catch at least there were some fish around. I wound in the sleeper rod and swapped the boilie rig for a short hooklink with an 18 on the end. A red maggot went on the hook and the feeder was leathered out to the line the grebe had caught from. As nothing was happening on the two rigs fishing closer in I slowed down the recasting and left them out for half an hour or more at a time. It made no difference.

It was getting pas three now, the wind had picked up and swung more to the west than the south. It even veered north for a brief while threatening to chill me and bring a dark cloud my way. The brolly had been taken down when the sun shone. It went back up and saved me from the few light spots that fell. Then it was taken down again as the day went back to being bright and dry as the wind swung back west.

It was completely unexpected when an alarm sounded and even more unexpected that it was the right hand alarm with the sleeper rod resting on it. The bobbin had dropped back a couple of inches. I picked the rod up and felt a decent weight which made a couple of surges as I pumped it back before going inert. Close in the fish woke up again, looking like a good one at the first glimpse of silver. As it slid into the net it was obvious that one of its parents hadn't been a roach. It looked 'wrong'. Oh well, it was a fish. Which is always better than a blank.

Despite this slight disappointment I was encouraged that something was feeding. With the light starting to fail my confidence for a last knockings flurry of activity was raised. Only to be dashed as I fished until the head torch was required to pack up.

Maybe it was the clearing sky or the fullish moon that kept it light for longer today. Or maybe being just those few days past the shortest of the year has made a perceptible difference. Whatever the truth I was glad to be packing up later than on my last few sessions and was looking forward to my next assault on the lake. I'm not too happy with the method feeder rig for smallish fish and would really prefer to fish another powergum rig with a cage feeder.  That'll have to wait until the tackle shop opens up again on Thursday as the only cage feeders I have are big heavy ones. or maybe I could take a hacksaw to one of the blockends and use that?