The day after my last session my back was aching. The day after that it was aching more. I still had the urge to go fishing but allowed reason to rule and chose to wait until my back was okay again rather than risk making matters worse lugging my gear along the bank. By the time I had stopped noticing my back (in other words it was no longer bothering me) the weather had turned chilly and places had frozen over. So I'd plan a pike session on one of the drains only for the rain to arrive and put them out of sorts. Then the cold would return but the drains were still running off hard. Then work got in the way.

Today I snapped. A thaw had arrived. I planned ahead and bought half a pint of red maggots yesterday (I already had some whites I'd bought to feed the blackbirds in my garden), crossed my fingers that the lake would be clear, and after the cricket was over for the day I threw the gear in the car and went for it.

The sun was shining bright and low, the winter solstice only days away, with a light southerly blowing. To be on the safe side I walked to the lake without my gear. ICE! Only at the car park end, and thinning. Gulls swimming at the far, deeper, end of the lake gave me some hope.

It was no surprise that I had the place to myself, so I was able to pick a nice comfy swim, with the sun in my face to warm me, and a swim I had seen produce to another angler previously. With the peg being one that had received some attention, and being in the deeper water, I hoped there would be some roach in residence looking for food. 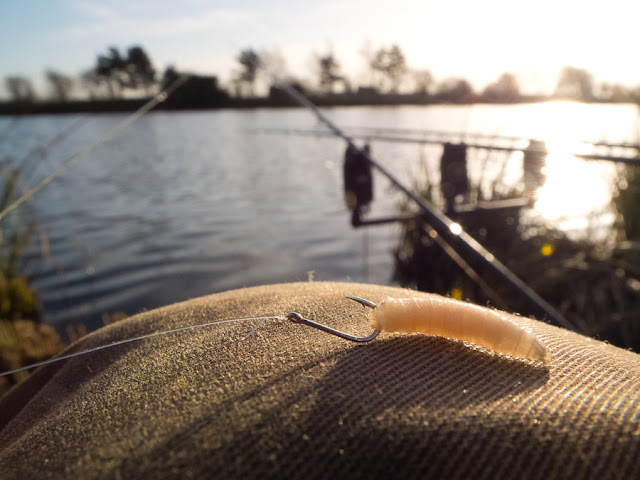 My rigs were as usual, with one white maggot and one red as two of the baits and a worm on the third rod. A preliminary cast had revealed a lack of weed, and the bank was soft enough to allow me to do away with the pod. I settled back and ate my lunch of growlers and energy bar swilled down with a cup of flask tea.

With the lake only just thawing out I recast at longer intervals than usual. Half an hour or more between casts rather than my usual fifteen minutes. Nothing happened.I drank more tea. A flock of long tailed tits announced their arrival in an alder behind me and I wished I'd not forgotten to put my binoculars in the rucksack. They're a bird that always makes me smile so I'd have liked to watch their antics in close-up. A closer look at the goldcrest that was accompanying them would have been nice too.

The sun was swinging to the west and losing heat as it sank towards the horizon. The breeze picked up and swung to the east. Despite the combination the air remained mild but fresh. I was by no means feeling cold. It was good to be on the bank again. 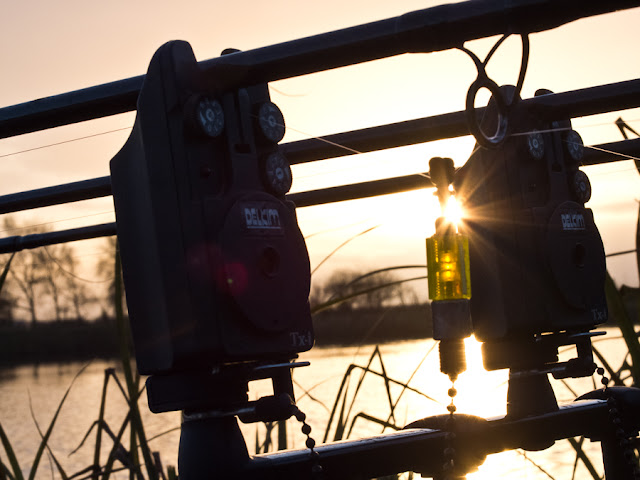 The tea drinking eventually took its toll and I had to relieve the pressure on my bladder. I took the opportunity to stretch my legs behind the swim. This was the cue for something to make the middle bobbin commence an up and down dance signalling a hooked fish. It was jigging upwards when I picked the rod up and pulled into the fish. A fish which promptly unhooked itself. This was ten minutes before I was intending to make an early departure.

Naturally I rebaited and recast all three rods and sat eagerly anticipating a dusk feeding frenzy. An hour later I wound the rods in and set off back to the car park, fishless. By now the lake was pretty much free of ice. A few thin sheets were blowing on the wind, melting as they went. With no frost on the immediate horizon I might be able to fit another session in later in the week after I have all my pre-Christmas work boxed off. I'm determined to catch something half decent from this place and get a fish photo on this blog!