Although it was Sunday and the sun was shining I went fishing. Back to the new water for an afternoon to find five anglers already merrily blanking. Maybe not merrily. The positive was they had fished the place in the past so I got some background information. I hadn't been aware of the presence of bream but there are some in, which explains why Friday's 'roach' looked a bit breamish.

This time I had taken the dreaded rod pod. Although I had just about managed to get the sticks in last time it had been a struggle, and in the swim I chose yesterday it proved impossible, despite the bank looking to be grass over soil. It was actually grass over a thin layer of soil over something impenetrable. Hemp and pellets were spodded out and two maggot feeders dumped over the feed. Again a worm rod was chucked to the right closer in.

There was a light breeze ruffling the water, but this time I had chosen a sheltered spot which still gave me access to the area I had had action in on Friday. Feeling comfortable and dry I recast every fifteen minutes to get some maggots out. Nothing much happened. There wasn't even much in the way of birdlife to watch.

Fishing on a flat bank covered in grass with my chair level and the gear neatly spread around me I realised how much I like this kind of fishing. Scrabbling up and down muddy river banks, or tripping over boulders on reservoirs, struggling to set a chair up so I don't slide off it are a few of the things that combine to take the pleasure of fishing away even when you're catching. Sitting in a cumfy-cosy swim with nobody to talk to is how I enjoy my fishing most. If it's got cover either side so I can't see any anglers around me so much the better. If there are no other anglers it's better still!

I was relaxing, watching the bobbins, recasting and drinking tea on a dry sunny afternoon. Great stuff. Then it happened. I put the cup from my flask on the bait-bucket lid, spun the stopper to allow the tea to flow and began to pour. With the cup half full the stopper popped out and landed in my maggot box followed by stream of hot tea. I can now confirm that maggots and hot tea do not a great combination make. The maggots reacted in just the same way they do when I pour boiling water on them. They expired. Worse still I lost most of the remaining contents of my flask!

Luckily there were only a few fresh reds in the maggot tub as I'd decanted some into the tub containing the remainder of  the maggots from Friday which I'd set aside to use as feed. I could still find a few fresh ones for hookbaits in amongst them. I was going to have to eke the brews out though.

One of the anglers I'd passed on the way to my swim came for a wander and confirmed it was still grim where he was fishing. Around two thirty he and his friends departed. One or two small fish topped as the sun swung further west and some cloud cover blew in. By half three it was getting chilly. The two remaining anglers packed up, having had just two sucked maggots. As they set off for the car park my middle bobbin dropped. There was something on the hook, but it was small. 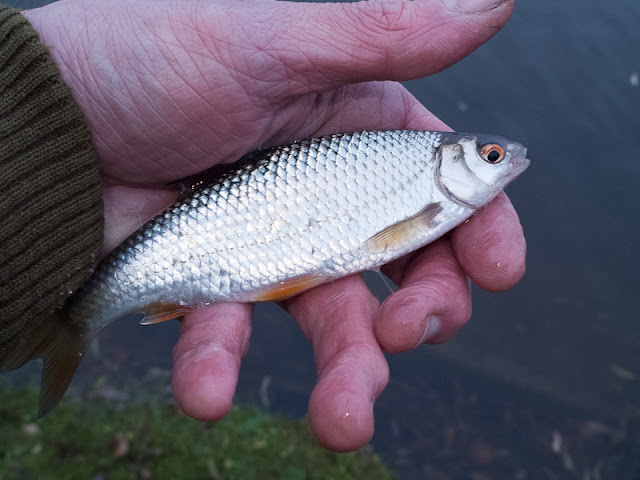 The red fins and overall 'look' said it was all roach this time. A couple more fish topped over the feed so I hung on until dark. The bobbins remained stationary. When I wound the worm in half of it had gone. Time to fish the worm on a running rig and the bobbin on a drop.

When the fishing is tough and nobody else is catching much it's difficult to build a picture and work out where you are going wrong. I did spot a few fish topping in one area. That might be worth a try. So far it's the best clue I have to go on. On the bright side I haven't blanked. Yet!