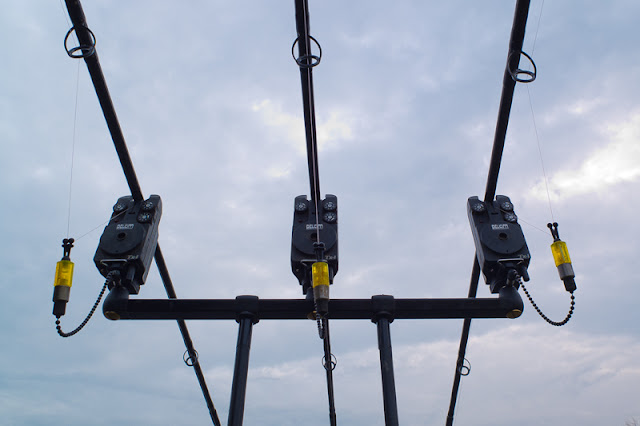 The warm week came to a halt today. The day I chose to try my new water for the first time. Still, the day was forecast to be dry. With that in mind I left my overtrousers behind and almost took the brolly out of the quiver to lighten the load as I hauled my overweight load along the bank. 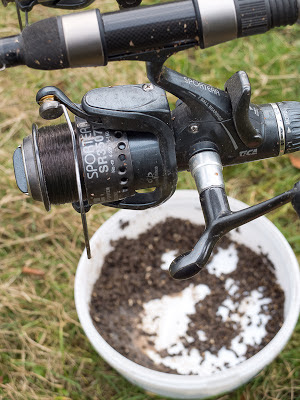 Although the morning had been overcast as soon as I left to go fishing the sun came out and I was looking forward to soaking up the sun and watching a repeat of yesterday's lovely sunset. Playing it by the book I set up with the light wind in my face and began spodding out a mix of hemp and micro trout pellets before casting two maggot feeder rigs over the top and a third rod to the margin with a dendrobena on the hook.

The worm rod was a suck-it-and-see job. It might pick up a roach, or anything else. The idea was to give me an idea of what's present. A big perch would be a nice bonus. Every fifteen minutes or so I'd refill the feeders and recast the maggot rods. The worm was left to its own devices.

It didn't take long for the sun to change its mind and go into hiding behind a veil of thin cloud turning the sky to a wintry watercolour wash.

An hour and a half after starting the worm got bitten off the hook. Things started to look up half an hour later when a roach hung itself on one of the baits over the feed. I say a roach, but there was something about it suggestive of bream in its heritage. Or maybe that's my imagination. 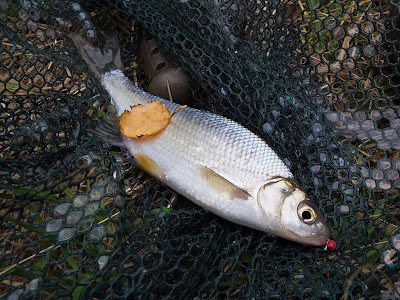 Behind me restless flocks of fieldfares were moving from tree top to tree top. As the afternoon wore on the flocks were joined by others and from there being maybe forty or fifty birds there must have been three hundred or more by the time they moved out of the area as dusk approached.

Around three I had a couple of bites to the maggot rods, one being a reel spinner that I connected with feeling a couple of thumps before whatever it was fell off. A few small fish started topping as the light fell. My confidence was rising for a dusk feeding spell. Then the horizon disappeared as the cloud thickened and rain set in. With the wind in my face it was a struggle to get the brolly up so it would keep the rain off me while allowing me to grab a rod. Of course if I'd put my overtrousers on I could have happily sat with my legs out of the brolly's shelter...

With the rain falling I must admit I wasn't rebaiting the feeders as frequently as I should have done. A missed bite to the worm rod managed to spur me on for a last burst of enthusiasm and I recast both of the maggot rods. With the rain looking as if it was in for the night I tidied everything away and packed up a quarter of an hour before dark. One of the maggots had been sucked without any indication on the bobbin. I reckon the hooklink was too long. Something to address before the next session.

By the time I arrived home the rain had stopped.