No two days the same

My patriotism has nothing to do with the red white and blue of subservience to an unelected elite as celebrated by so many just recently. It's to do with an instinctive connection with landscape, natural history and weather. Something I feel certain all anglers in this country must understand. Something I experience every time I go fishing, even if only for a couple of hours. Even in that short a time the world can change most markedly. Skies can shift from clear to clouded,  sun can shine and rain fall - sometimes together, winds can turn on a sixpence.

Sunday was hot and still. Perfect for an evening's eel fishing, especially as there was cloud cover to keep the air temperature high. I was settled into my gap in the marginal growth by eight o'clock, baseball cap shading my eyes from the setting sun.

Both rods were fishing to the opposite margin, one with a lobworm and the other with half a roach. With it being bright I didn't expect any action until ten. It was, therefore, a surprise when the half-roach bait was taken at nine thirty. The light had softened but it was by no means dark. As per usual I hooked nothing. 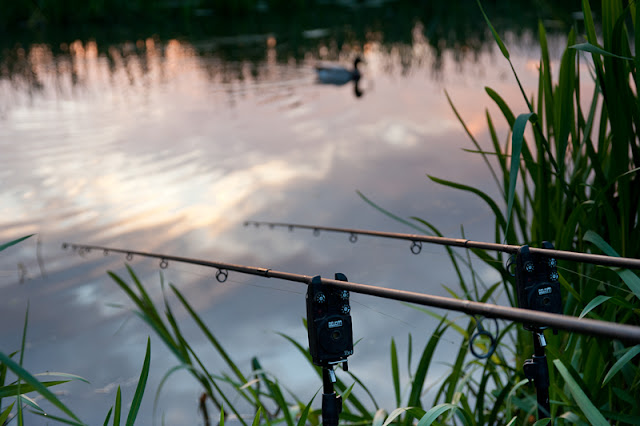 The canal was calm, the midges prolific. It was only a matter of time as I sat there feeling warm in the still air watching the cloud patterns change slowly as the sun set. Oystercatchers continued flying and calling into darkness. A summer darkness that wasn't as dark as it could be. The jackdaws in their roost started their pre-sleep arguments. The half-roach was away again. This time I felt a brief thump before I wound in the baitless hook. I recast. Switching from drop-off to baitrunner. To no avail as it turned out before I left for bed.

Monday had started dreary, but the afternoon saw the clouds break up and sun shine without much heat. This time I headed fifty or so yards further along from Sunday's swim to fish some stick-ups. Given the lack of attention lobworms have been getting I fished two roach sections. One was cast across using the long lead-ink, the other flicked in teh near edge to my left.

There was broken cloud to keep the temperature up, but the wind had a northern chill to it. I had my fleece and woolly hat on from the off. despite the coolness I was heartened to see some bubbles rise near the far bank bait. Probably bream as they came to the surface in a broad patch. Eels bubble too, but their tell tale pattern is a moving string revealing the fish's movement.

As usual the warblers were extremely active and vocal. Not as noisy as they are earlier in the when claiming territories and attracting mates, but still loud for their size. Constantly on the move hunting for food they cause reed stems and leaves to twitch. So too does the wind, and a leaf brushing the line made my alarm sound a single bleep every so often stirring me to action. 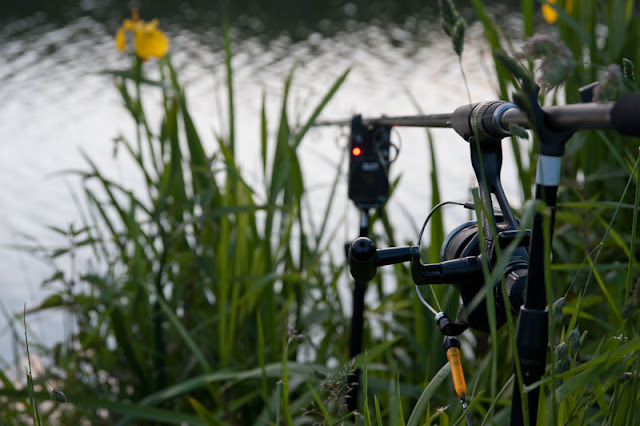 Something I couldn't identify rolled briefly. Possibly a bream, maybe a tench. Small fish were topping intermittently. The chilly breeze kept the midges at bay. I wasn't filled with enthusiasm. So it was a real shock when the stick-up bait was taken at ten past ten, five minutes before I was going to have had enough. As per usual the culprit was not hooked. I gave it until half past before admitting defeat.

When I brought the baits in they felt decidedly cold. At the end of the heatwave they had been coming in parboiled. I think I'll give the eel blanking a miss until things get hot again. The rivers will be open on Saturday. There's something I want to try out on one. No doubt I'll catch eels by accident.
Posted by Dave Lumb at 10:29 am