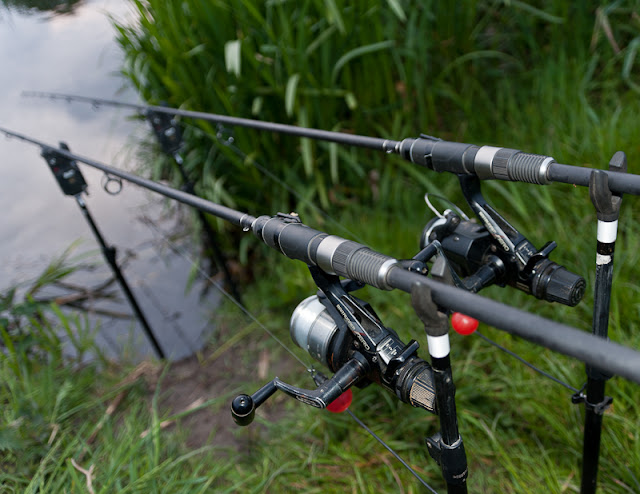 Wednesday saw a few showers in the cooler air. It was still warm so I braved a break in the wet and headed for the canal armed with some lobworms and the last of my maggots and a frozen roach. If nothing else I could fish two lobs as the eeling hour approached should my bait bashing fail.

The going was tough on the float-fishing front. One tiny, tiny perch was hooked and released before I gave up and put out the eels rods. A lob close in over maggots and half a roach to the far side. It was tough on the eel front with no signs at all until gone ten o'clock when I had a couple of clip-outs to the worm rod. The drop-offs were in use this time, but not enough happened to give me any suggestions as to their effectiveness.

By Friday things had dried off and it was sunny again. Maggots were bought and, although I hadn't planned to, I put the gear in the car and headed for the canal again in the evening. Friday is not my favourite day for fishing. Especially on warm evenings when there are liable to be people walking the canal with their mutts. Not to mention all manner of other annoying human activity. I should have know better and stayed at home.

The float rod was out first and it didn't take me long to get a bite and hook a fish. This turned out to be a nice roach of maybe four ounces. Too big for eel bait in my book. I Looked for the disgorger I was sure I'd put in my bag a few hours earlier and couldn't find it. I pressed a peacock waggler into service in its place. With the roach returned I had another search, finding the disgorger in a different pocket in the bag. There are only two pockets to choose from and I put it in the empty one, not the one with my float tackle... 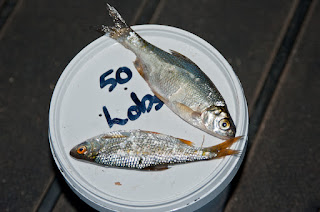 Very small fish were topping all around giving me hope of a bait or two. By casting to various spots in the swim I managed to catch three bait-sized fish, two roach and a hybrid by the look of it.

Among the small fish flipping about was a pike the size of a matchstickwhich flipped itself onto a lily pad. I've seen them do this before over the years. I've no idea why it happens. They always manage to flap and flip enough to get themselves back in the water. Tiny wee things, but still with the predatory glare of their larger sisters.

All was going well until the resident ducks had a mad fit. Four or five drakes and one female started a cacophony of quacking, followed by a mad pattering of webbed feet and the noisy flapping of wings. They were heading straight for me. Instinctively I ducked (sorry!) as they flew through the gap between the willows my swim was in. I felt my line tighten and the rod pull round in my hand. One of the dumb creatures had flown into my line which parted with the proverbial resounding crack.

Luckily I could see the float bobbing away in the middle of the canal, so it wasn't attached to a duck. Out with the eel rods. The first one set up I thought I'd swing the rig out under the left hand willow branches and see if I could either snag or drag my float back. Did I say "under the willow branches"? Somehow it went in them and got well and truly tangled. After much heaving there was another resounding crack followed by a loud plop as the lead entered the canal. This was not auspicious. 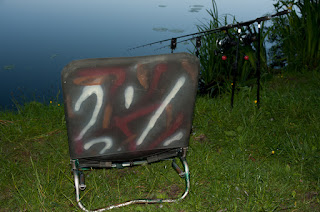 The other eel rod was got out of the quiver, baited with a lobworm and cast out to the far side. The late evening boat traffic had died away so I'd to have to worry about that. As I retackled the first rod I was increasingly beginning to regret my decision to fish on a Friday. The birdsong was being drowned out by loud music in that annoying way distant music has of being mostly beat with teasing snatches of vocals making it difficult to tell if it's the kind of music you might enjoy. Only once did I recognise a tune, and that by it's distinctive opening bars which managed to carry on the still air. Oasis's Wonderwall would have been bearable if it hadn't turned into audio-mush before the first verse ended.

The ducks returned, waddling up onto the tarmac to sleep. I suppose tarmac is warmer and drier than grass. With a bit of luck they'd stay out of my way now. A couple of woodpigeons seemed to be making the willow on my right their roosting place. Sedge warblers had been making their usual noises, hard to think of it as a song, all evening.

When the light was fading I was surprised to see my first blackcap of the year, a male, fly into the pigeon tree and work its way up and through the branches. One of the drakes took its head from under its wing, stood up, evacuated it's bowels with a noisy squirt, took two paces forward and sat back down again. The bats came out. My bobbins didn't move. Eventually the music subsided to be replaced by people on the moored barges shouting to each other. I'd had enough. Time for a brew, bed, and a rethink.

Today was dull and dreary. I couldn't face going bait snatching to stock the freezer for some reason, so I did a bit of work. One job was to rectify a niggle on one of the rods. At some point I think I must have 'borrowed' a ring from one of them to do something to another rod because the two rods didn't match. I removed two rings, moved one up and replaced the missing one from the set. I also added some whippings to the handles. The rods still won't look like a rod builder made them because, like too many of my own rods, they've never had their second coat of varnish!

With the rods broken down I took the opportunity to tidy up my rigs. The leger beads have been replaced with run rings. That's all. I replenished my little tackle box so I'll have enough bits to re-tackle should I cast into another tree. Last night I had to manufacture a buffer bead by cutting down a tail rubber. I'm nothing if not improvisational. I'm also indecisive. My latest dilemma is choosing whether to rig the rods up with braid, or stick with mono.