The decision had been to set the alarm for five thirty. Which I duly did. So why was it starting to come light when I woke up before hearing the alarm go off? It's a long story involving a broken second hand and a failure to check. Nonetheless I got myself out of bed and had an early breakfast while pondering my next move. It was a dark and dreary morning, so I pottered about doing some small jobs.

Around ten the day started to look brighter. Still very breezy and threatening more rain, but warm enough to tempt me to the bankside. The problem was I had nothing to take for snap. An early lunch would see me able to have baits in the water by noon and survive the afternoon without starvation. And so it proved. Flask filled and some healthy nibbles chucked in to accompany it and I was on my way.

Why I insist on walking as far as I can I really don't know. I passed an inviting swim that had been kind in years gone by and headed into no-man's-land. Given the strength of the wind and the imminent rain I had to set my brolly up to face away from the water. I hate having to fish like this, relying on the alarms, but there was no other option. 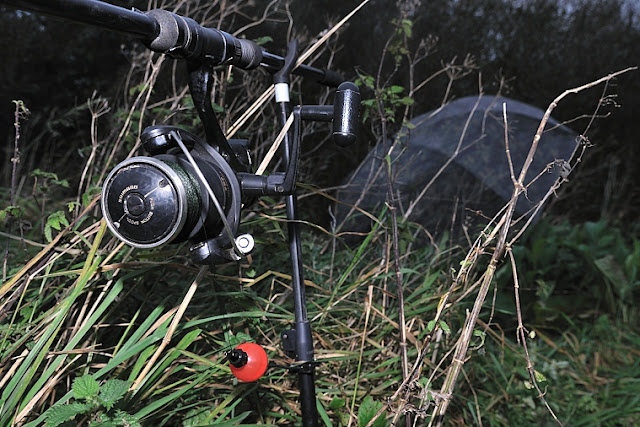 The spot I chose gave me no freedom to move easily, and while the idea of staying put until dark didn't appeal it seemed the best line of attack given my late start. I didn't really envisage a second afternoon pike. So it was a case of sitting it out.

As usual both margins were covered with the three baits, which were the same choices as yesterday. Given my restriction I moved them about the area during the afternoon. Why I bothered I don't know. When I did get a run to the float legered lamprey head it had been in the same spot for two hours. Yet again it was a jack of about three pounds. I'm beginning to think there is just one pike in this drain, that it weighs about three pounds and it's stalking me! At least I know my tarty new drop-off bobbins do what they are supposed to. Drop off.

The geese had gone from the mere. Odd skeins passed over, buffeted by the strong wind, pink-pinking as they went. The avian highlight was a peregrine which appeared twice. The first time I saw it it was having a set-to with a pair of crows. The second it was flying high and downwind when it suddenly increased it's speed and entered a low dive. A lapwing took top the air, soon joined by another as the peregrine's attack was aborted. I don't recall seeing peregrines on the mere twenty five years ago. Or is it thirty? They were a rare bird in those days. Buzzards were also unheard of in these parts, but the pair I watched hanging on the wind today are hardly worth a mention, so common are they now. On the negative side I used to watch hen harriers working over the flatlands, but these days they are becoming scarce, unlike marsh harriers which are regular visitors to the coastal marshes and the mere come winter.

Times change and catching afternoon pike on deadbaits was something I'd never have counted on when I first fished this drain. My rigs have changed too, but only in the fine detail. Bottom end sliders work well in shallow water at close range. The indication of a bait being picked up is the unmistakable falling flat of the float. I'm currently giving a vaned marker float a go as a bottom end slider. It shows up really well.

However, there are times on the drains when a float can be a liability. When there is a lot of floating debris on the surface, usually cut weed and reed either drifting or going with the flow, it can gather at the float and drag a bait out of position. At times like that a straight leger is a better proposition, fished with the rod tip well sunk.

With this in mind I'm trying a set-up that will allow me to swap from the float leger to a straight leger without leaving too much on the line and without having to cut it. In the past I have attached my floats by a small link swivel. But when left on the line they can gather weed. Korum brought out some natty 'Running Clips' a while back which I never found a use for until now. They're a  large eye clip that can be put on and off the line. They work like a large eye swivel with a clip attached, but are neater and, obviously, don't swivel. So long as the float has a swivel in its base there are no worries. Nifty. I have another use for them lined up too. Which if it works will make for a really versatile and useful set-up.

Despite the one fish being caught in mid-afternoon I didn't fancy my chances of more at last knockings. The drain had begun pumping harder and there was some of that debris coming down hitting the paternoster float in particular. With the brolly dry but rain approaching I called it quits and managed to get back to the car just as it hit. At least I'd reacquainted myself with another stretch of the drain.

I know my chances of catching numbers of doubles at a sitting are slim on this water, but that's not the challenge. It's getting to know the place again. It's not just the surroundings that have altered. The pike's preferences seem to have changed too. Four fish on deadbaits in four fairly short sessions was unheard of in 'the old days'. Livebaits were another story, but deads used to give one fish every three or four sessions.

So far I'm enthusiastic about piking again. A couple of blanks or a failure of bigger fish showing up might change that. But for now I was happy to be piking when I knew the river would be in good nick for barbel. On the rise with an air temp of 17C meaning the rain going in would be warm. The river pigs must be on the prod. But these days I want to fish for what I feel like fishing for. And it seems to pay off. It's that old 'confidence breeds success' Zen thing.