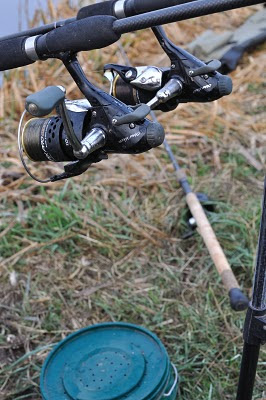 Having seen some perch chasing prey fish when I had my sole canal pike session I thought a few morning perch trips would be worth a try. So I ordered some lob worms at my local tackle shop. That was about a month ago... At the second attempt 50 juicy worms arrived last Saturday and this morning was my first chance to take them out. I did some pre-planning and bought half a pint of red maggots yesterday and put my float rod in the quiver too.


The weather has been set fair all week so it was no surprise to see pike patrolling the trailing marginal reeds making swirls every now and then. After a cool night there was a ground frost and a light mist at first light, the sun only burning the mist away by eight o'clock. My first two hours were almost pure frustration trying to stop the floating reeds fouling my lines. By the time the sun broke through I had dragged enough to the bank to stop any more in its tracks and could fish my two leger rods in peace. 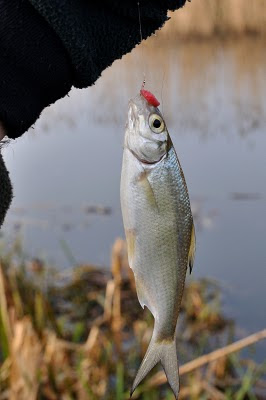 The worms were untouched, so I set up the float rod to scratch around for a bite or two using a single red maggot on the size 16 hook. It didn't take long before the float dipped and rose and I struck into nothingness. Two casts later I had saved the day from being a blank!


More bites on the float, many missed because I was too lazy to alter the set up to catch tiny fish, and a couple more small (tiny) bream were caught. I also had two short quick lifts on the bobbins. Possibly from perch, possibly not. As I had things to do I wrapped up at half past nine, glad I hadn't bothered with the bunny suit as the sun was quite warm.

If it hadn't been for the action from the tiddlers I'd have been in the mood to chuck the rods in the cut after the messing around with the floating reeds. As it was I'm contemplating some more maggot drowning over the weekend. Probably not on the canal though.