The BBC weather pages seem to be very accurate at forecasting the day's weather, even if they keep changing the predictions for tomorrow. With this in mind I tried to get to the river before the rain was set to arrive around three. I just made it - at quarter to two I had both rods out and the umbrella up as a light rain began to fall.

For some reason I had decided to try for barbel in the area I fished on Sunday., and left the chub gear at home. Within ten minutes of casting out the downstream S-Pellet to the crease, which had moved downstream with the slightly higher level, I had a couple of quick chub knocks. Given that the river was less than a foot up, and falling slowly, was coloured but not much, and hadn't got much warmer the chub gear might have been a better bet. 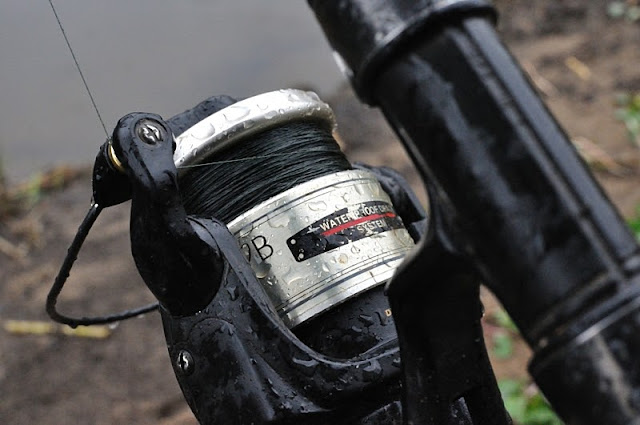 As the internet had suggested the rain got heavier. The wind wasn't strong, but chilly, however sat down below the bank top it was starting to feel like spring. Despite the rain it wasn't cold at all. A few celandine were showing and all manner of plants pushing their heads through the soft sandy silt on the bank.

I sat under the brolly listening to another dismal performance by the England one-day team as Bangladesh hammered them. That was about as exciting as the fishing. I really do hate fishing from under an umbrella. I feel cramped, and it constrains my thinking. It's rare I fish well when it rains. Unless bites are coming I can't get motivated to try things out to provoke them. I wasn't helped by running out of PVA mesh, and not having enough pellets bagged to recast frequently to search the swim. 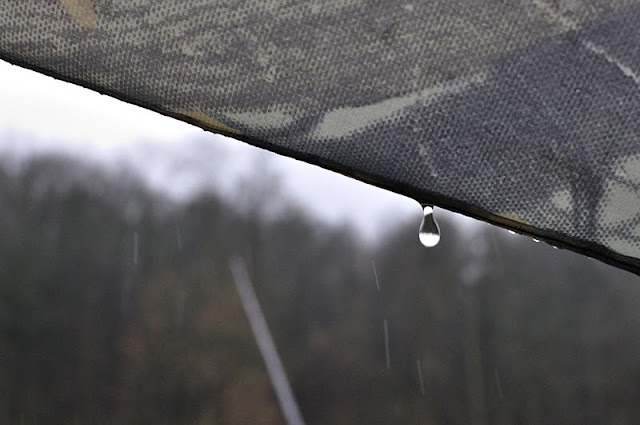 So it was that by the time the rain let up my confidence was at a low ebb as darkness fell. I had expected a few more chub knocks at the very least, but none came. On days like this you have to enjoy being there and despite hearing deer bark, watching a male goldeneye fly upriver accompanying a pair of goosander and seeing a bat flitting around well before dusk my heart wasn't in it. I gave up about an hour into dark wishing I'd stuck to the chub plan.