My garage smells of eels

There's no doubt about it. These days I am very much a fair weather angler. If May hadn't been so bloody wet I might have made a start on my eel fishing a while ago, although an early start can see me burned out before the slimy things are really active. With the temperatures risen and settled I made the trip to the tackle shop for a tub of worms on Friday. Even so my long lay off saw me reluctant to make the small effort to fish after the close of play in the first test match of the summer. Monday was different. It was an easy job to load the car, once I'd remembered to swap my pike boxes for my eel box in my rucksack. At the last minute I remembered the pack of deadbaits I'd bought and I was on my way. 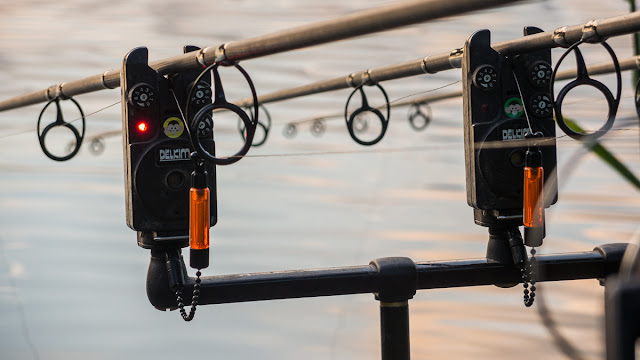 Although there's almost a week of June gone by already there are still some hawthorn blossoms to be seen. Most of those remaining are turning pink and ready to carpet the ground below like a sprinkling of untimely snow. A bitter cold April and the wet May has put everything back, but things are catching up fast with the sudden rise to summer temperatures. Other umbellifers are joining the fading cow parsley along the sides of the path round the lake and at its edge, the guelder rose is out too. Would the eels be stirring from their torpor?

A wander round the almost deserted lake didn't offer much in the way of inspiration when it came to swim selection. So after returning to the car for my gear I settled for comfort and previous track record as my starting point for this summer's eel campaign. Although snags and margins are often cited as the places to fish for eels I feel as if I've had more success fishing my baits in open water on this particular venue. When using three rods one bait gets fished close in, close to reeds, pads or overhanging bushes if there are any. But the open water baits are the ones that seem to get picked up more regularly.

My approach was the usual one. An off bottom worm bait, a legered bunch of worms and a legered deadbait. The dead went to my left on the end of a reed spit, the legered worms into no-man's-land, and the off bottom worms towards a lily bed which has thrown up a few eels for me in the past. All three rods were fishing by quarter to nine. I thought it would be an hour or so before I'd get any action. Plenty of time to relax and take in the world.

I'd seen a whitehroat as I left the car park and the chifchaffs were singing their repetitive song. A grebe was cruising and mallards skulking. Small fish topped in the edge as a carp cruised by. while it was bright the sun was mostly behind cloud and the wind from the north west was cool in my face but hardly rippling the water's surface.

After just half an hour chilling out the right hand Delkim went mad. To my utter amazement when I struck I could feel an eel wriggling it's way to my left. Not for long though. Never mind. It was still daylight and that was one more take than I'd had on the last eel session I put in last year. The off bottom bait had worked again.

It wasn't long before I had twitches to the same bait, and a strikeable (but missed) run to the legered worms. All this in daylight. It was still light at ten o'clock when the off bottom bait was off again. Another good run which I connected with. This didn't feel as heavy as the one that had dropped off at first. The closer it came the heavier it seemed and the first sight of it on the surface had me hoping it stayed attached. Which it did. Making a 50 inch landing net has been one of the best eeling moves I've made! Had the girth of the eel's belly carried on to its vent it would have merited a self take, as it was I was happy to record it laid alongside my rod and scales. With an eel like this as the first of the year it can only be downhill from now on! 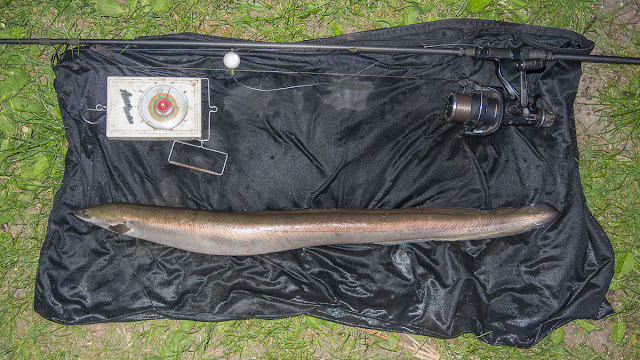 For the next hour it was the traditional experience of small twitches to various baits. At eleven fifteen I connected with one to the off bottom bait to find a bootlace eel foul hooked near its tail. Baffling. Ten minutes later things got hectic.

The off bottom rod produced a pounder. Five minutes later, before I had the off bottom bait back out, I was unhooking a smaller eel which had taken the legered worms when line tore off the reel with the deadbait on the hook. I forgot I'd rested the worm rod across the rod pod when I struck and it went flying as I struck. The run was  missed... With the mess of rods sorted out and all three baits back in the water it went quiet again.

At midnight it was decision time. Give it an hour or wrap up for an 'early' night? A trace tangling bootlace to the off bottom worms at half past made the decision for me. I couldn't be bothered making up a new hooklink in the dark. There were other things which needed sorting out before my next session too, so I packed up pondering as I walked back to the car if eels are crepuscular rather than nocturnal. There does often seem to be a peak of activity either side of nightfall tailing off as the night grows darker.