Downhill all the way

Full of new-found enthusiasm I couldn't wait to get back after the eels. Two nights later I was walking round looking for a swim to fish. one problem with this particular place is that most of the swims are made to accommodate someone sat on a seat box fishing a single rod. If set up to fish 'carp style' with self hooking rigs and rods on pods this isn't an issue as the fish hang themselves and sat up on the bank you can still get to the rods without fish dropping the bait. Same for piking really when even an 'instant' strike doesn't have to be as instant as striking  a quick dip on a float from a shy biting rudd.

Eel fishing for me is all about striking takes quickly. I don't seem to get the non-stop runs that I used to. even when I did a smart strike might be required to hook an eel before it found sanctuary. when I first fished the canal for eels I was casting baits tight to far bank reed beds. By the time I could grab a rod the eel would be deep in the reeds and everything was solid. I switched to fishing my baits under the rod tops to give me time to strike before sanctuary could be reached. Even sitting close to the rods some eels still made it all the way over the far side! 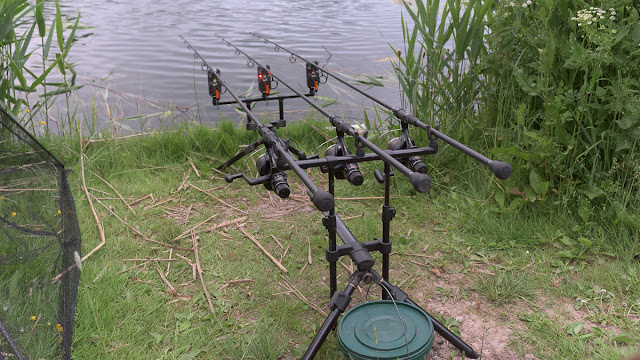 As the pegs here are all nicely stoned getting individual banksticks in, my preferred way of fishing, it has to be a pod. Some of the pegs aren't even wide enough for that, let alone have room to put up a chair. This all limits my choices. I didn't want to fish the same swim as my first session so ended up dithering between one I've never fished for eels and one I have caught from. The one with previous got the nod.

Conditions were similar to two nights before and I was soon having to replace missing worms. The eels were active again. As predicted my initial success was not to be matched and the average size of the four I landed was well down. I was catching though, which was encouraging. Despite some activity to the deadbait it was the worms getting the majority of the action, both on and off the bottom. By half twelve my stock of worms was getting down to the regs so I packed up satisfied and planning to restock at the earliest opportunity.

That opportunity came on Friday. Get worms in the morning, fish in the evening. Sorted. That was the plan until my car packed up on the way to the tackle shop. Bugger. I was going to change the motor last year but when Covid arrived there wasn't much point as I wouldn't be using it much. Anyway, long story short the car was fixable but the garage had one in that suited my needs and budget. Rather than spend money fixing the Zafira I chopped it in. problem was I couldn't get my hands on the replacement until this Thursday.

A whole week later than planned I was heading back to the lake. Normally I'm not keen on Friday night sessions as it can see carpers setting up for the weekend but as there was a football match of some sort being mentioned all over the internet and news media I thought I might have the place to myself. As it turned out there was one carp angler setting up near a swim I really fancied. I fished my second choice instead.

It was a few degrees cooler than the previous week, but still plenty warm enough as I arranged my gear in one of the more accommodating swims. This one gave me a good choice of features from pads to marginal rush and open water. All easily fishable from a pod. 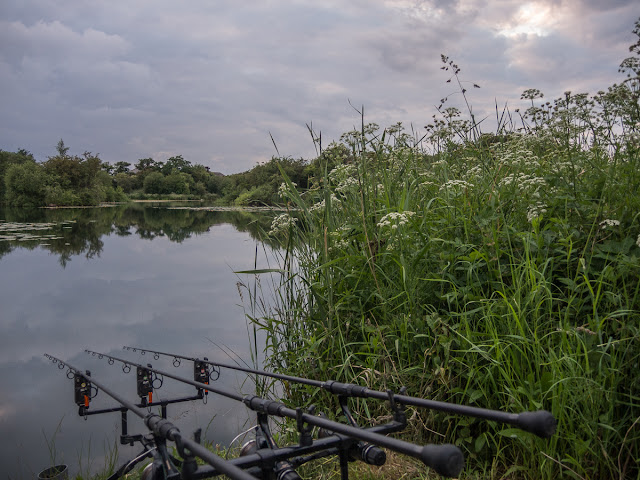 Baits out by quarter to nine and the bleeps and twitches started soon after. This time it was a night of frustration as even the steady runs were missed. Fishing the off bottom bait close in my strikes almost saw the rig flying out of the water at me a couple of times! Plenty of takes from twitches to runs but no eels landed. 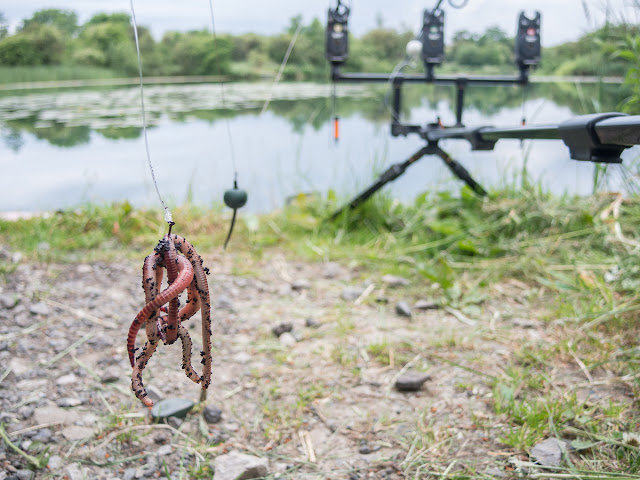 After my first session I'd been rethinking my rigs. In particular my hooklinks. While I like the Kevlar catfish braid I've been using for worm baits it is a bit tangle prone. Rooting in my eel/catfish box I thought it might be worth tying up a couple of hooklinks with the 20lb Mason's Hard Mono I used to use for making pike fly leaders (the bit before the wire leader the flies are attached to before you get the wrong idea...). It's tough, abrasion resistant and stiff. Not easy to knot though. While I was at it I had a change of hook pattern to a shorter shanked more round bend hook. Owner C-5X in fact. Using this hooklink on my leger rig caught me a couple of the small ones on my second session and damage to the mono was negligible. Certainly an option worth persisting with to see if it does significantly reduce tangles.

This is the rig I use for fishing off bottom. The boom is glued into a drilled out John Roberts Paternoster Boom, the end of the boom being flared over after heating to stop it pulling right through. The lead link is heavy and stiff mono for a couple of feet ending in a loop to which I tie a weaker link to take the lead. The length of the hooklink is shorter than the boom to go some way to reducing tangles on the cast. I've been using 70lb Kevlar catfish braid for the hooklinks when using worm baits, but when this does tangle it can be a real bad tangle. I'll be giving 20lb Mason's Hard Mono a try next time out. 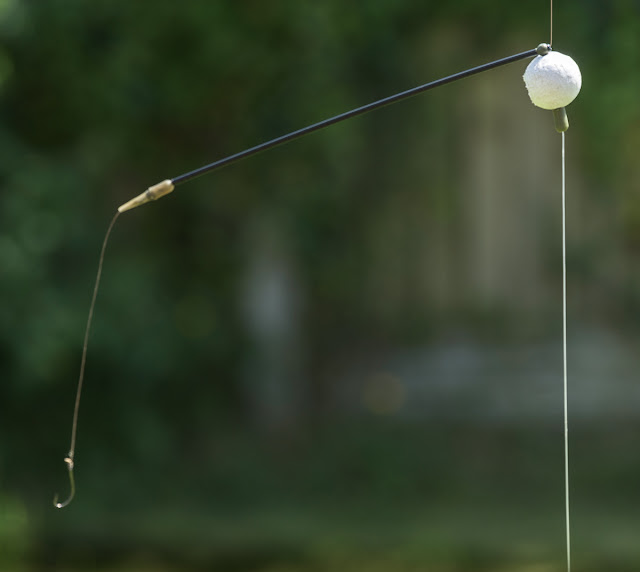 Whether the blank session was a result of some change in conditions, the presence of only small eels in the swim or a new tackle curse I'm not sure. Does a 'new' car count as tackle? if not maybe it was the new box I'd got to keep my spare batteries in. It's a neater solution than the box I used to use. takes up less room and stops the batteries rattling about. Although it's designed to hold four PP3 batteries the slots in the rubber insert will take two AAs for my radio and just about three AAAs for my head torch. I was glad of the PP3s when the sounder for my Delkims started making the low battery noise. 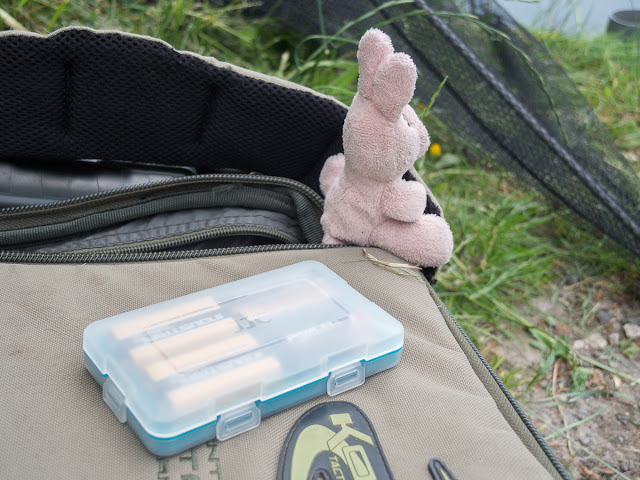 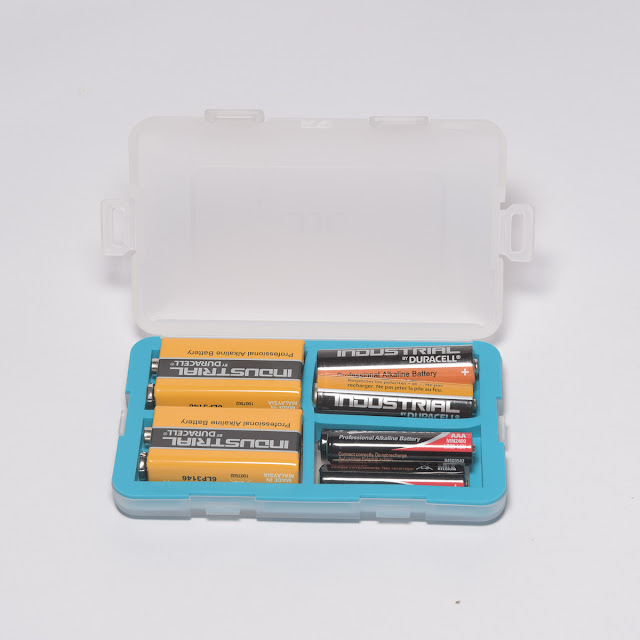 Now I'm stocked up with worms I'll be out eeling again soon. I have two swims in mind which I have yet to fish which I think might produce. At least they'll be a change of scenery!

On the rod building front I've had a few unusual builds to keep my interest up and which are options for future consideration.

White painted rod tops are not my thing but I get requests for them on a fairly regular basis. After many years I've got a technique sorted for doing them which I am happy with. It's time consuming but gives a good looking result. I still can't decide if white tips look better with white thread on any rings that go on it or with the same thread colour/s as used on the rest of the rod. This one has two small isotopes added. The customer went with the black/copper thread option.

At he other end of a rod, in this case a lure rod for bass fishing, I came up with a way to fit a full shrink tube handle to a slim blank and make a Fuji butt cap fit and look good. Again a bit of a faff but worth it. Putting the shrink over a hard Duplon cone at the back of the reel seat is another neat and functional touch, I think. If I ever rebuild my trusty P-5s I'll be going for something like this for the handles, only with plain rather than X-weave shrink tube. 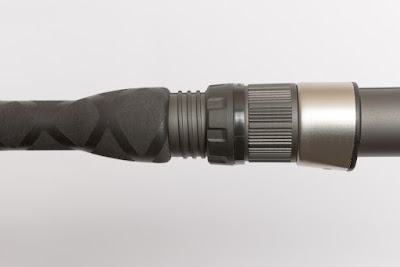 Finally, don't ask me to build float rods. Not only do I hate fitting all the fiddly little rings while trying not to break the delicate tip sections I can't find a set of rings which meet my aesthetic preferences. Thankfully I only get asked to build one or two a year, so reducing this to none at all, ever, won't be much of a loss!