No sooner had my knee returned to normality than my back went on me. Thankfully it eases off as the day goes on and by lunch time I'm mobile enough to pick up a rucksack and some rods. That was what I did yesterday afternoon. At last I was on a gobio hunt. 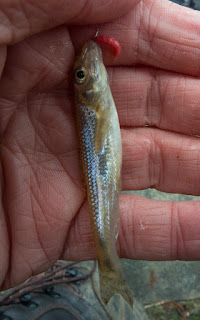 The pond was quite busy but I found a swim where I could stick a carp bait down the edge while I fished a float for the gudgeon. The hunt was soon over. I don't think I actually needed to put in any of the groundbait I'd found in the freezer and thawed out, or the handful of maggots I'd scattered over it. First swing out with the float and single white maggot and there was a gudgeon on when I lifted out to reposition the float.

That was the way things continued. Drop the float in, wait a few seconds and there'd be a gudgeon on the hook! Some were among the tiniest gudgeon I've ever seen. None were as large as I used to catch when I was younger. All were too small for pike baits.

I missed one or two bites. Probably because the little buggers couldn't get the hook in their gobs. When I tried a red maggot things hotted up. No longer did I need to wait for a bite to show. As soon as the bait touched bottom the float was on the move. The bottom of the pond must be crawling with gudgeon.

After swinging in a dozen or so of the little fish I put the float rod away and dropped two grains of fake corn over the spot I'd been feeding. I had a liner to the other rod before the corn rod sprang into action. The culprit being one of the pond's skinny chub. Back out with the corn and shortly after a small carp hung itself on the same bait.

Around four o'clock a song thrush began to sing high on a black-budded ash tree. Such an English sight and sound it's no surprise Thomas Hardy found the thrush's song an inspiration for a poem.  Listening to it certainly cheered my soul on a gloomily overcast and chilly afternoon. 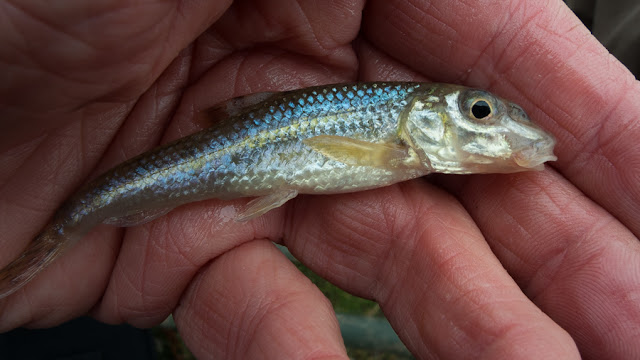 After banking the carp I put that rod away and reverted to the float for the last half hour before the thought of food tempted me back home. First put in and the float buried. No gudgeon this time but a hand-sized carp. Had the pasties moved in over the feed and pushed my little friends out? The next cast proved they hadn't as another gudgeon was swung to hand.

If it had been warmer I'd have spent more time gudgeon bashing, in an attempt to find one that wasn't minute. Then again, if the water had been warmer I reckon the nuisance carp would have been more active and annoying. It was still an enjoyable afternoon. I'm not sure I'll be repeating the exercise as I think I've got  gudgeon out of my system for now.