Tuesday afternoon was one of times days when I had to go piking. Cool, sunny, and when I got there just the right sort of ripple on the water. With it being so bright I wasn't expecting any action until late on so I took my time setting up - and taking a few snaps of the orange-topped floats against the cerulean sky. Perfect complementary colours in great light. 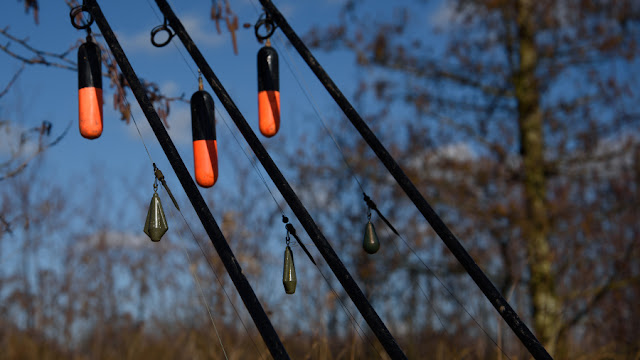 There were eighteen tufties drifting about in open water, four ducks among the drakes. The mallards were mostly skulking in the reeds. A buzzard flapped its way eastwards. A kingfisher zipped past me making it's high pitched call. The deadbaits weren't doing anything as interesting.

I moved swims on the hour. Five as the last move to a swim I felt I should have been in all the time. It has three or four nice spots to cast to, all of which have produced pike for me. First cast with the lamprey, a long chuck to a bar, and the float came off the line. It was my native laziness that had stopped me swapping the clip that failed last time out. Well it looked okay to me. Now I had a wayward float drifting towards the edge of a particularly wide reed bed. As good fortune had it the wind must have shifted slightly because the float ended up in a place where the distance from dry land to reed edge was at its least. With the wind dropping it would be there in the morning, when I could get back with a longer net handle. I sat it out until dark, which is now arriving after six, for the increasingly inevitable blank.

The highlight of the afternoon came during the last hour when I was able to spend some time watching a barn owl hunting along the banks and in the scrubby land around the lake. If I'd kept a lower profile I would have had a really close encounter with the owl, but it saw me as I made a sudden movement and it veered off over the reeds.

As I began to pack up There was a light frost forming on my luggage, and as I reached the car park a gritter went by flashing its orange lights. Could I face getting up early in the cold to fish out my float? As things turned out I could. There was no other fool around when I got back to the lake this morning. Walking past the float after packing up I made a mental note of where the float was and worked out that I might need something just a bit longer than my longest landing net pole.

I'd come prepared to cobble together a Heath Robinson pike-float rescue tool! Lacking a long enough landing net handle I had gathered together a 13ft pike rod (lacking a butt ring), a roil of narrow gaffer tape, and the kiddy's fishing net I use for skimming duckweed off my pond. I hastened to the spot in the reeds I'd noted and scanned the edge for my float. It wasn't there. The only footprints in the frost were my own. Had a foolish carp swallowed it? I checked the reed edge away from where the float had last been seen. I walked round to look from the other side. No sign of it.

I was about to give in when the sun broke through the early morning cloud. I looked out over the blue surface of the water, ultramarine with a hint of burnt umber. In the middle distance, glowing in the bright slanting light, was an orange blob. It could be only one thing. Best of all it looked like it might be close enough to the bank to reach 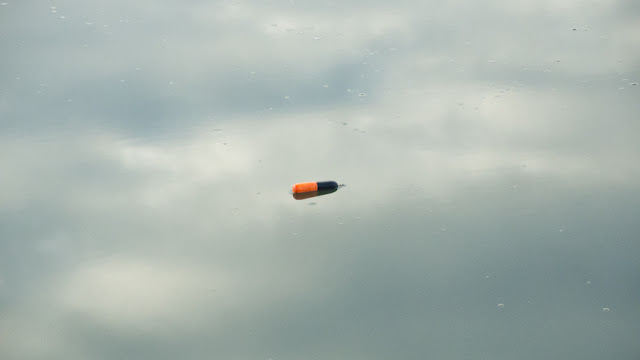 I rushed round to the swim it was drifting around in, put the rod together and checked for its reach. It would need another foot or so. The fishing net was taped to the rod top and the float scooped up first try. Happy days!! My next job is to swap the dodgy clip for a new one. I guess it's done all right though. It must have been on the line for four years or so! 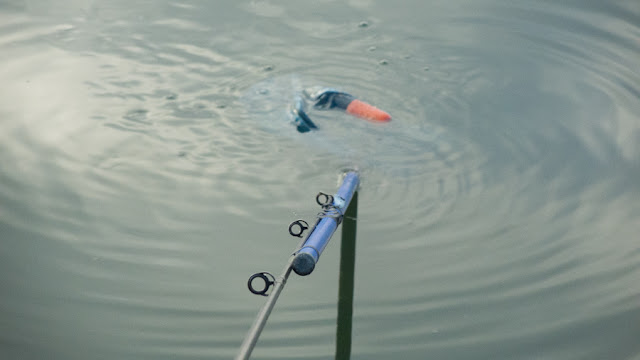 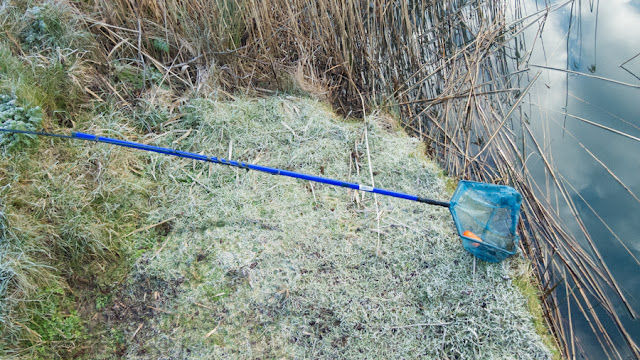