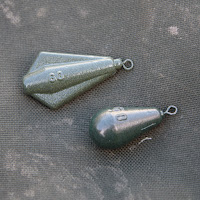 It should have been obvious a blank was on the cards when I set off to try out some new forceps. LB from The Pikers Pit had read my blog moaning about my long forceps and recommended the ones Caimore (no affiliation) supply. They looked good and were cheap enough so I ordered a pair of the 8.5 inch scissor forceps and one of the 7 inch heavy duty. Delivery was prompt and they look and feel good.  They both have larger finger holes than my old reliable pair, which can sometimes get stuck behind a knuckle.

Not only did I have two new pairs of forceps with me I'd replaced all the leads on my rigs and put some new spares in a tackle box. My supply of 2oz bombs was almost out so I'd ordered a couple of trade packs of cheap and cheerful leads. One of 'silt' bombs and one of dumpy pears. I prefer them to the 'carp' leads you usually see in the shops because these have the swivel moulded into the lead rather than being on a loop. Which I always think is both unnecessary and tangle prone. 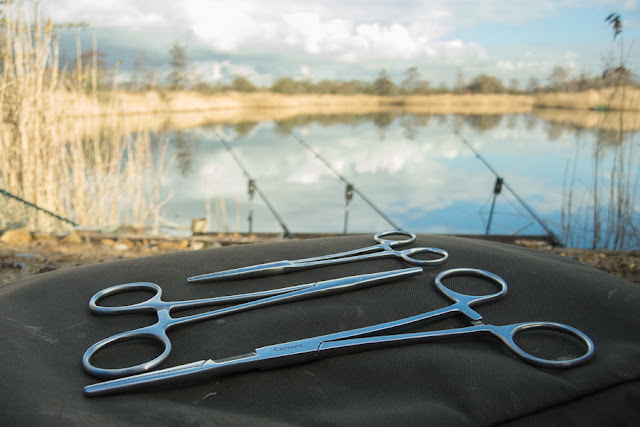 If all this newness wasn't enough I cast two baits out then tied on a fresh trace to the line on the third rod. that baited and cast out I sat down to make up another spare trace. I hadn't got the bottom hook twisted on the wire when I noticed the middle float had disappeared and the line fallen slack. I wound down, and wound down and wound and wound. Nothing. The bait wasn't even marked.  I began to wonder if the float really had sunk and the line gone slack. The bait had thawed out enough to make the hook hold a bit soft so I tied the bait on. Two casts later it was almost where I wanted it and I returned to my trace making.

Although conditions had been alluring while I was at home, they weren't giving me 'that feeling' sat by the water. Great tits were chinking, wrens singing their unbelievably loud song. It was nice not to be battered by the wind for a change and great to be outdoors, but the ripple on the lake wasn't looking pikey to me. I had a fiddle round and repositioned the baits. I went for a long chuck with the lamprey head and the float looked to have flown up the line. The float stop must have perished. When I tightened to the line to the bait the float didn't move. Bugger. It had come off the clip. I left the lamprey where it was and stuck a back rod rest in the ground and clipped on a drop-back bobbin. At least the wind would blow the float into the reeds across the corner and I could go fish it out with the landing net when was set for a move. Then the wind dropped to nothing.

I sat there watching the unattached float going nowhere and plotting my return at first light with a long handled landing net. Hang on. It was coming closer. There was no apparent wind but something was moving the float towards me ever so slowly. By the time I was ready for a move the float was closer still. I packed two rods away them slowly retrieved the third, making sure the line was going over the float. It did the trick and I soon had the float within netting range. I cheered up.

The next stop was a swim that I have yet to catch a pike from. It looks the part and covers similar water to a swim that has been kind to me. Baits were positioned close to pikey looking features where it surely wouldn't take long for one of the floats to rock and fall.

The only downside I have found to keeping mobile is that when I'm not catching I get the niggling doubt that staying put in one spot might have been a wiser choice. In this second swim that doubt played on my mind. I had good intentions of fishing the last hour in an off the wall spot. But doing that without a fish under my belt was a step too far and I ended up stopping until dark in the second swim. I couldn't think of a better choice. When inspiration deserts you it does it in style. I can only hope that I've got the new gear jinx out of the way and next time I'll be catching again. 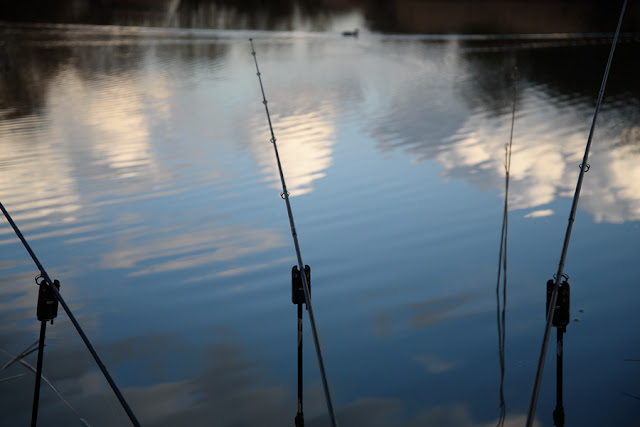