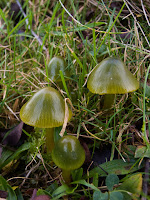 I forgot to mention last time that I had worn my new hat and didn't blank. Always a relief. Since that damp session it seems to have hardly stopped raining. So when today started off dry and there was no suggestion of precipitation I thought I might sneak out for the last few hours of daylight. When I got distracted talking to anglers on the canal taking the scenic route back from the Post Office I was running late. I almost decided to stay home, but the day, despite being windy, was too good to let pass without wetting a line.If I could get the baits out by two I'd be in with a chance.

Finding the car park deserted was a bit of a surprise, but a welcome one. A short walk and I did indeed have three baits out and the first cup of tea poured by two o'clock. The sun was shining sporadically as the strong wind blew clouds over. Once more it was warm enough to leave the bunny suit at home and not wish I hadn't. It took only half an hour for a pike to pick up the margin fished smelt.

The float had gone and the line was streaming through the water. Some fool must have forgotten to engage the anti-reverse because the reel handle was spinning too! Any loops of line that might have tangled round the reel were avoided as I picked the rod up and wound into the fish. Once more it was fish that didn't do much other than wriggle as I drew it over the net.

Once more that was where it woke up and managed to thrash the flying treble into the leg of my bib and brace. Great. I managed to rip the treble out of the cloth to free myself from the landing net and pike and start getting the other hook out of the fish. It looked like it might scrape double figures, but I doubted it would as it was another skinny fish. Not quite, but another fish to the new hat. The trace was trashed after all that messing about so I set about reusing the trebles on a fresh bit of wire. 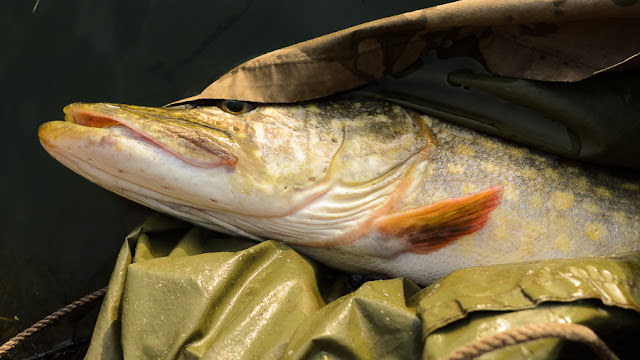 The wind wasn't cold, but it was annoying even though the water was calm in front of me. I was in two minds about a move. I had thought of trying a swim I'd yet to catch from that looks the part. At three fifteen I tidied the gear and set off. As I passed one swim it felt the proverbial overcoat warmer. It was lovely and calm. However that was another swim I've yet to catch from, in an area I've never had a run from. I stuck with plan A. I knew the wind would be barrelling in to that swim, but I would be able to shelter behind some bushes and still keep an eye on the floats.

The rods were back out by half three and I sat back to drink another cup of tea and photograph some oddly green toadstools I'd placed my chair besides. The brew hadn't been finished when the right hand margin rod was away. The float wasn't steaming off this time, just slowly waddling away. When I connected with the pike it felt heavier than the first fish. Hugging bottom it did that gill flaring head shaking thing as it came up in the water that always makes me think the hooks are going to come free. It also makes the pike look to have a bigger head than it really has. Both these factors get the adrenaline going.

However the resistance was yet again just head shaking and the fish slid over the net in no time at all. Despite the warm weather the pike don't seem to be wolfing the baits down and there was a free flying treble. They also don't seem to be packing weight on because this was another pike that could have weighed more. My guesstimate was close to what the scales told me. 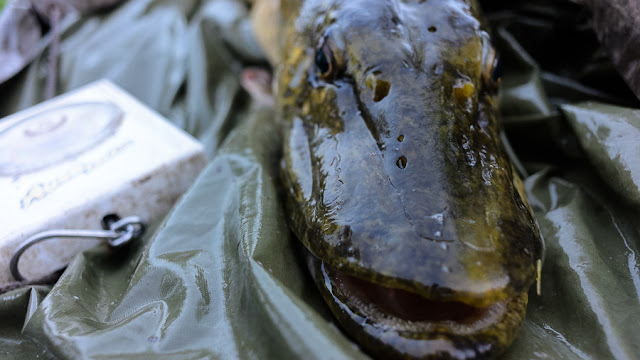 Strong winds tend to keep birdlife out of sight. There were a few mallards and a couple of tufties on the lake. A grebe had dived down as I'd approached the first swim. Other than that all I saw was a kestrel being buffeted as it hovered and a pheasant blown at high speed across the sky as dusk approached.

I thought there might be an outside chance of a second fish from the same spot. That was all that kept me from packing up and heading home for an early tea. By four fifteen that hope was fading and I was gone by half past with still a bit of light left.