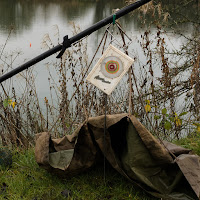 Although a lot of pike anglers bemoan mild winters I have to say I like them! I've never held to the notion that pike fishing improves after the first frosts and that a cold snap is required to get them feeding. Maybe that's because I did a lot of pike fishing in the spring in summer when I started taking it seriously and noticed a decline in my catches once winter arrived only taking an up-turn as they congregate for spawning.

Having sweated more than expected on my walk to and from the Post Office this morning I got that irresistible urge to get the pike rods out. After a quick lunch the rods were soon in the back of the car and some baits sorted out, rucksack added and off I went.

For once I didn't have much of a plan. Once parked up I had a wander and decided to try a swim I'd never put a pike bait in in anger. There are still a few forlorn looking lily pads hanging around so one bait was dropped next to some of those, another went to a nearby feature on the other side of the swim and the third got blasted out as far as I could get it. The bait went a bit further actually as it came off the hooks. I wound in, hooked on a tougher bait and put it where I wanted it. Then I sat down to make a couple of spare traces as one I was using was getting a bit curly. With that job done I was contemplating cracking open the flask when there was a bleep in my top pocket. I'd only been there twenty minutes and the lamprey head by the pads was falteringly on the move.

As soon as I connected with the pike it pulled back hard then did a dolphin impersonation, launching itself out of the water. I was expecting an epic battle but that was it. Yet another wet sack of a pike slid over the net. Where it immediately went berserk! It might be warm but these pike are neither wolfing baits down nor fighting like tigers. All rather odd. Broad across the back and slightly skinny it weighed the same as the last pike I caught. I'm pretty sure it was a different fish though.

Those traces I'd made came in handy because the pike had trashed one. I swapped traces, put on a fresh bait, recast and had that cup of tea I'd been going to pour. Then I reused the trebles from the kinky trace to make another replacement.

There was a light breeze that wasn't enough to cause a wind chill. I was glad that I'd left the bunny suit at home and just put on a bib and brace to keep me clean and dry as I had to remove the woolly hat after the hectic few minutes the fish caused. For some reason all the mallards were skulking under the trailing bankside branches with their heads tucked under their wings. A lone grebe was working the water in front of me, a few roach topped. It seemed like there were prey fish in the vicinity. Maybe there'd be a few more pike around too.

After another hour it was decision time. Stay where i was or have a move for the last hour or so. The swim opposite looked inviting. I went for it but wasn't convinced. Leaving my gear in the second swim I had a wander to see if anywhere else appealed. It didn't really. Seeing something swirl in front of where my gear was sealed the deal. Three rods were cast out, the net assembled and before I could sit down the small herring had been picked up. It seemed that I'd made the right decision.

It was like deja vu. The strike met the solid resistance of another wet sack. When I got a glimpse of the fish it looked about seven pounds. As it slid over the net cord it seemed to double in size. Sure enough it proved to be my heaviest fish of the winter so far. It was slightly chunkier fish too, which was encouraging.

The little herring had got well and truly mangled as I pulled it from the treble so I could see what I was doing to dislodge it from the scissors. I had no more little herrings so I put the tail of a larger one on and lobbed it back in the same spot.

I'd checked the weather forecast before setting out and it had predicted rain after dark. Not only was the bunny suit at home so was the brolly. When the rain, thankfully light, arrived earlier than expected I put my jacket on and hoped for the best. It proved to be little more than drizzle which meant the rucksack and quiver weren't going to get soaked. The wind had dropped as the rain arrived and the light was fading.

The only other angler on the water stopped for a chat on his way back to the car park just as it was getting difficult to see my farthest float and it was he who noticed the margin float dip. As I looked at it the float sped up and disappeared. A positive take rather than tentative ones I was getting accustomed to.  This time my strike was met with slightly more tenacious resistance. But not much more. Looking in the net by the light of my head torch this pike had length behind its big head. It felt heavy too as I lifted it ashore. That previous fish hadn't remained my heaviest of the winter for long. I handed my camera to the other guy and a couple of quick snaps were taken.

With the pike returned farewells were bade and I set about packing up. Not a bad three hours fishing. Proving once more that some things I never put much store in in the past really can pay off: fishing in the afternoon, moving swims and hanging on until it's too dark to see a float. If only I could get this approach to work on other waters with bigger pike!