It wasn't much of a choice to make between supermarket and fishing when the afternoon promised to be mild, dry, not too sunny and not too breezy. The early lunch might have proved to be a good move the way things panned out. For one of those unaccountable reasons I had a last minute change of plan and bypassed the swim I'd had in mind when I left home, and still had in mind when I got the gear out of the car. I ended up dropping a lamprey tail in the right hand margin with the light breeze in my face, followed by a longer chuck with a herring tail. Try as I might the two frozen smelts wouldn't separate easily, they'd need a bit of thawing unless I was to risk snapping the tail off one. I was gently trying to ease them apart when the sounder in my pocket let out a single bleep. A bleep which was followed by a prolonged trilling. The margin float was on the move!

Once more fishing off the baitrunner resulted in the rod hooping over after less than a full turn of the reel handle. You might expect a lively fish hooked at close range to make a bolt for open water, or more likely the remains of the nearby weedbed. This one just bulldogged, hugging the bottom and going round in circles. As it came up in the water the boils it created were encouragingly large. After making sure the net was sunk beyond the floating weed in the edge, and the dead tufty amongst it, I managed to draw the pike into the folds. It would obviously need the scales and sling so I left the fish in the net - secured by a bankstick - while I got the unhooking gear sorted.

With that the fish unhooked and weighed, and with only one bait in the water I sacked the fish to have another practice with the self-take set up. I had the tripod and mat all lined up and was still messing about with the camera when the sounder began a slow burbling. I looked up to see the only float I had in the water wobbling away to the left. Even at slightly longer range the hookset was instant. At first I wasn't able to gauge the weight of the fish but when it got closer I was sure it was another decent fish. I was glad that I'd tidied the first rod away and not left the hooks and rig in the landing net now. Once netted it was a simple matter to hoist the fish on to the unhooking mat, pop the hook out, weigh the fish and take two quick snaps. If it hadn't coughed up a four ounce roach on the way to the net it would have been close to a twin for the first fish.

With all that done and the fish released I dried the blood off my hands and got the plasters out before I got the sacked fish ashore and repeated the photo shoot with two quick snaps of each side for future reference. 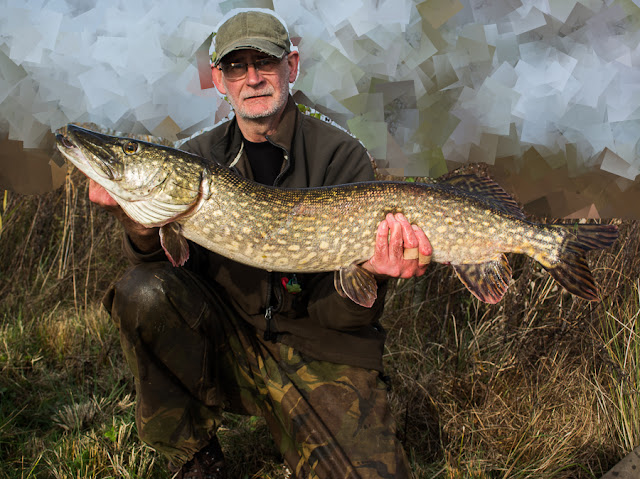 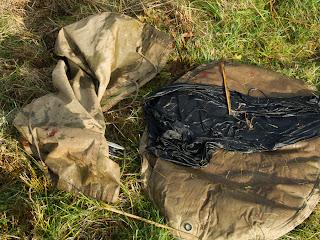 By now the swim looked like the proverbial bomb had hit it and I had no baits in the water! The first job was to get another half lamprey in the margin. The smelts had softened up so one of those was stuck on a paternoster and lobbed to the right margin. Finally I replaced the trace on the middle rod, baited up with a small herring (or was it a big sprat?) which I bound to the trace with red elastic thread, and put back out where the herring tail had been taken from. Then I sat down for a rest and a brew.

Despite the almost instant success I had the urge to move after an hour more. Only a couple of swims away, but that can be enough at times. Not this time though. Another hour and I was on the move again. Quite a bit further this time to cover completely fresh water. By the time I had packed the gear, walked to the new swim and got the baits out I doubted I'd have time for another move and settled in to fish until dark.

This swim looks the part, with more features to go at than most, but it's one that had yet to produce a pike for me. The sky was not only getting darker, it was getting more cloudy where the wind was coming from. The temptation to pack up was there, especially after having caught a couple of nice doubles. On the basis that if i got wet I had all the next day to dry the gear out I hung on. The light had pretty much gone when I thought I saw the far float wobble. A trick of the fading light? It wobbled again then it moved. It definitely moved. I was on the rod just as the alarm sounded and the float disappeared. There wasn't much of a fight until the fish was in the net. That was the cue for the rain to fall. Resting the mesh of the net on the middle Delkim I went for my jacket and headtorch before starting the unhooking and weighing ritual. Not quite a double it still rounded off the afternoon nicely. Even the rain gave up by the time I had everything packed away ready for the walk back to the car. 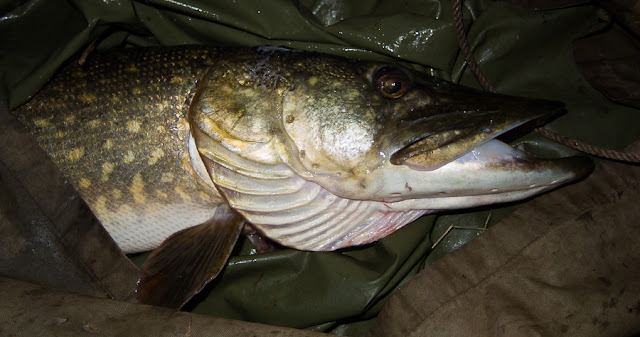