Apparently there was some football match or other on telly last night. That must have explained why the roads were post-apocalyptically empty and the lake nearly so when I arrived shortly after nine. Last time out I'd looked at a swim which would allow me to cover a large area of open water. Given that most of the eels I was catching were coming away from the margins that seemed like a plan to follow. The swim was, unsurprisingly, vacant.

This time I had some fresh worms with me and thought I'd try a bunch on the edge of the pads with a bit of squid cast well out. Almost immediately I had takes to the worm rod, the worms being pinched. By ten o'clock I'd had a couple of runs to the squid, bumping a fish off on one of them. The action wasn't hectic, but steady enough to keep me interested.

It was a warm evening with a light breeze. The full moon was rising orange in the east. Silence descended on the lake as small bats flitted around the overhanging willows. I began to relax into my surroundings in anticipation with my radio turned low as I listened to The Week In Politics. That lasted a few minutes before The Copper Chopper came overhead circling around the lake and drowning out the radio. I expected the searchlight to sweep over the water at any minute, or a gang of criminals to charge past me pursued by howling police dogs, which naturally enough would seize on me.

When a red LED glowed brightly and the sounder in my pocket began to wail I forgot all about the commotion and managed to pull into an eel. It was hard to determine how big an eel had picked up the squid, but it was hooked and I wasn't letting it get away. I made sure the net was well sunk and the eel well over it before I lifted. All went well and one of the fatter bodied eels was safely swimming around in the net. 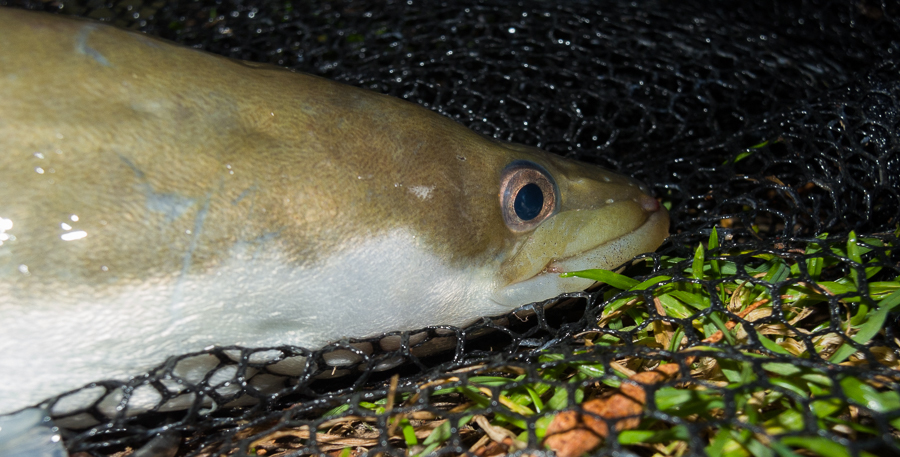 Sling and scales were readied before I swung the net ashore. This was barely done when the sounder sounded again. With all the excitement I had somehow blocked the noise of the helicopter out. The worms were showing no sign of stopping. Another eel was hooked. It was obvious from the outset that it was a bootlace, so once I had it in close I let it swim around in the margins on a couple of feet of line while I dealt with it's big sister (or brother). Five ounces over two pounds. Good enough for me but not worthy of the hassle of setting up for a self-take. Certainly not with a bootlace waiting to be unhooked.

Ten minutes later I was putting a fresh hooklink on the worm rod to fish a bigger bait when the recast squid was off again. With tackle all over the place I managed to fluff the strike, feeling the lightest of bumps that might have been an eel. The squid was recast, a roach tail put on the other hook and cast well out. By now the chopper had moved on and peace and quiet had returned.

Twenty minutes later the roach tail was taken but dropped. I did the winding the bait back to the lead thing. It was taken again five minutes later. My striking technique was back to normal, the bait gone from the hook to be replaced with another bit of squid. I had one squid chunk well out and one on the pads' edge. The close in bait was picked up and the strike messed up again at half eleven. Thirty minutes later I was packing up.

I'm wondering why the early sessions produced so many runs one after another, barely giving me a chance to sit down at times, and now things are more like I expect from eeling. Enough takes to keep me interested, but not so many as to tire me out! I was thinking of trying a different venue for a few sessions, just for a change, but I really ought to stick at it on one water. Or should I?