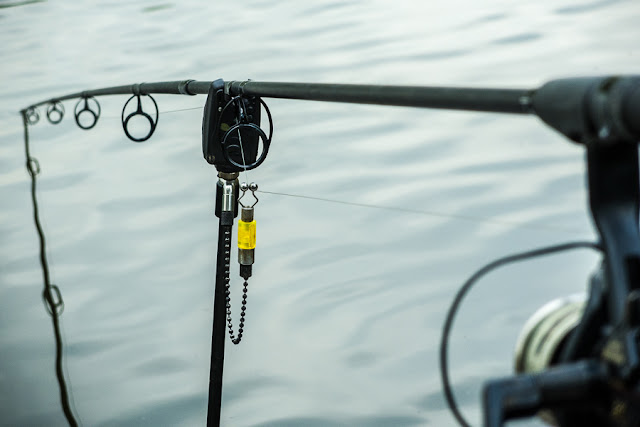 Against my better judgement I spent the last few hours of daylight tench fishing yesterday. It was just that with places starting to look tenchy it seemed like a good enough way to kill some time. With my latest set of tench rods still drying I made do with the pair I used last time out - complete with the same rigs, and in the case of the fake corn the same baits!

I'll blame the easterly direction of the wind for my lack of success. Something bubbled just off one of my baits, and small fish were topping. Maybe I had been in with a chance. The hawthorn is starting to bud, but it'll be a while yet before the blossom's out. By which time my new rods will be ready for action. Actually two of them are ready this morning but I don't want to try them out too soon.

It's not that I need new tench rods. The 1.75lb Interceptors are as near perfection as I can imagine. However I have developed an eleven footer fetish. Eleven foot rods always feel better balanced than twelves. They are lighter to carry, and take up less room in the car too. In practice, for all but the longest casts, they are more than sufficient. What's not to like? So I'm trying to find a blank which matches the Interceptor's action, but a foot shorter. If I can I'll have all bases covered at eleven foot for my close range fishing. Which is mostly what I do these days.

For roach, perch, rudd, small-river chubbing and anything of that sort, I have my Chimera Avons in 1.25lb. Simply can't fault them. For eels, close range barbel and a bit of zander fishing (should I do either again),  and carp (should I have some form of mental aberration) there are my recently rebuilt (yet again) P-2s. Piking is covered by the P-5s which hardly ever leave the quiver. The only gap to fill is between the Avons and the P-2s for tench and bream with feeders and leads around the 2oz mark.

Having played around with the 11ft 1.75lb Torrix a bit last summer I found it just a tad too stiff in the butt for my taste. When I built a 2lb version up for customer earlier this year it felt like a different rod altogether. Less tippy (much less tippy than the 12ft 2lb Torrix which I ditched after one summer's use in favour of the Interceptor) and not much more powerful overall. The slightly stiffer tip making the curve come further into the butt, perhaps. Only fishing with a rod tells the true tale, so that's the blank I'm trying out this summer.

The build I've chosen is based on what I did on my Avon's. Ultra matt blanks, cut down reel seats with matt carbon inserts, split Duplon grips, black plastic butt button, six Alconite rings plus tip (25 - 8) rover style, keeper ring on left of rod. All lettering under the blank except for 'DLST',  whipped in black with metallic purple tipping at the handle to break the black monotony without being too obvious. They look the part. I hope they live up to my expectations.