The last time I went fishing I managed to pick a dry and sunny morning. It did me no good on the pike front as not a run was had. However, I did spend some time watching a female stonechat hunting. Hard to imagine a small robin-like bird hunting, but if it had been a bird of prey that's what its behaviour would be called. The perky little bird was perching high on dead umbellifers, seemingly doing nothing, but all the while it was surveying the area around it for insects and when one was spotted it would swoop up or down then return to its perch or take up another one. 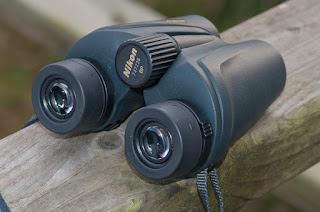 This was all observed through the cheap and cheerful pair of binoculars that has lived in my rucksack for a number of years.  I bought them before I needed to wear glasses full time, so I have to remove my specs to use the binoculars. After trying a friend's expensive Swarowski binoculars and being able to see through them while still wearing my specs I'd been hankering for a new pair for a while.

Watching the stonechat I realised that not only was the eyepiece adjustment on the right side becoming useless, but also if I closed my right eye everything looked orangey-red, while is I shut my left eye the world turned bluey-green! I vowed to spend more than £25 on a replacement pair... 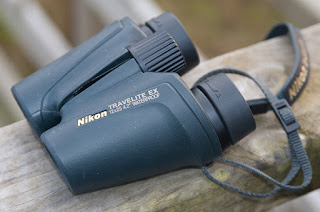 Although the binoculars I ended up with are a little more powerful then my old ones that suits me as I usually want to identify small birds that are far away when I'm fishing. As they focus very close so should prove useful for identifying dragonflies. They are a little bigger and heavier than my old pair. This doesn't bother me much as I can see through them without having to remove my glasses, and the images are much clearer and the colour is better. The eyepiece adjustment ring clicks as it turns so shouldn't slip out of place like the ring on my old bins did. Yippee!