Only one short session in the last fortnight. A session at a new location which was aborted early by the arrival of rodents. I can put up with rats when they are a few yards away and in clear view. But when they are scurrying in the undergrowth a few feet from my chair, and jumping in my swim I prefer to be elsewhere. It's not a fear of them as such, it's the way they surprise you. The night is still and quiet, I'm chilling out and relaxed when the silence is disturbed by a sudden loud rustling that makes me jump. If rats are in plain sight wandering around they can be interesting to watch. It's their propensity for unexpected rapid movements that sets me on edge.

Yesterday had been one of an Indian summer so it seemed like a good plan to have one last fling for an eel or two before sorting out the pike tackle. The evening looked set to be warm so I was quite enthusiastic as I got the eel gear together in that switched off way that I have when I know I'm not going to think twice about fishing. I even set off earlier than I'd intended.

Yet again my intended swim was occupied by a bloomin' barge so I settled in a spot I've fished before. My swim choices were limited by great clumps of uprooted reeds. I think the boat traffic disturbs the reed beds and causes them to drift around. When there's a tow on the canal, or a wind blowing along it, these 'islands' of reed can be most frustrating as they drift through a swim. At other times they blow into swims and block them, until they get moved on by more boat traffic.

The rods were cast out, one close in to my left, one straight across. Both deadbaits going over a scattering of red and white maggots. I sat back to listen to the radio and watch the clouds change colour while swallows twittered high in the sky. 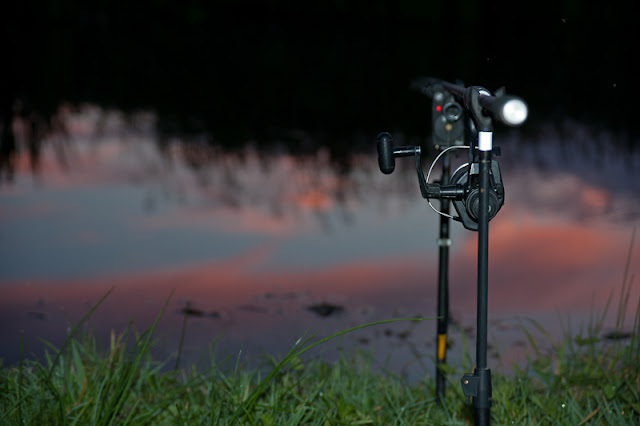 Nothing much happened. There was no wind. The distant turbines which spin slowly on the slightest breeze were still. The chatter of reed warblers which had been an accompaniment to my eel sessions all year was absent. I'm sure there will still be some of the active little birds around for a while yet, but I neither saw nor heard any. A jogger made his sweaty way home along the towpath, small fish dimpled in the margins. Although the air cooled it was by no means cold. I only put my woolly hat on out of habit.

A single bleep to the right hand rod almost got me excited until I saw the drifting weed that had fouled the line. With no wind the canal was flowing ever so slowly. I wound in and recast. There were a couple of similar indications to the left hand rod with no sign of weed, but as I wasn't fully happy with the way the line was running through the leaves of some water plants in the edge I decided to reposition the bait just off the shelf, even though there was not long until my planned departure time.

I tidied my rucksack and sat back. The air seemed warmer despite my fleece feeling damp to the touch. The barn owl that frequents the area flew towards me, almost over the rods as it crossed the canal. It's legs dangled as it hovered briefly some twenty feet from me before heading to better hunting grounds.

Looking at my watch I saw home time was nigh. Then the left hand Delkim bleeped twice. The bobbin inched upwards as it sounded again and I found myself by the rod. As the bobbin reached the butt ring I picked up the rod and struck. Not into thin air. There was an eel pulling back. Yet again an Anguillan mind reader had done its magic trick and picked up a bait just as I was about to leave.

It was clear that this wasn't another run of the cut eel. At one point it seemed to get very heavy indeed and I wondered if it had weeded me. After much merriment I managed to get it in the net. Snaking on the surface I had guessed it to be somewhat larger than it looked in the net. Making the net secure I packed away the other rod and all the banksticks before readying the scales and camera.

Unlike my last eel this one didn't escape before going in the sling. In fact it was very well behaved. Not quite big enough to warrant messing around with a self-take I settled for snapping a few close ups before slipping it back. I like to return eels from the sling by putting just their head in the water. The way they slide sinuously from a dry to a wet environment is fascinating.

The rod was put away along with the landing net and I headed back to the car, uncertain if that had been my last eel session of the year. There's supposed to be a week or so of September sunshine, so maybe there'll be a few more eels too.