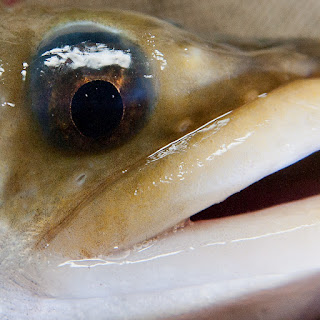 I nearly didn't get to fish yesterday as there was no space in the designated parking area, so I had to be creative. It got worse when I discovered the swim I fancied was inaccessible. Such are the joys of trying pastures new without doing a recce beforehand. I managed to find a spot that looked eely though and soon had two baits out, both fishing over a scattering of maggots and casters.

There was a light breeze blowing, but it was warm. The sky was overcast so the temperature would stay up when the sun went down. As a faint red glow appeared below the cloud base the wind dropped, but nothing else happened. No fish topped, no birds flew to roost, no bites materialised. It was looking grim. I was already titling this post 'All quiet on the eeling front'.

The take took me unaware when it came. I was in daydreamland and the fish managed to find weed, but steady pressure got it free. As last time I imagined it to be larger than it looked once netted, but it was still bigger than the average.

I'd class a 2lb plus eel rather like a ten pound pike or eight pound barbel. Nothing to get excited about once you've had a few bigger ones, but big enough to keep the interest up. They're of a size that tells you you are doing the right things to catch the bigger specimens. Larger than average fish can be caught  mixed in with the small ones, but mostly they aren't. If all that come along are bootlaces, jacks or splashers you get the feeling that perhaps you are using the wrong tactics, in the wrong place, or there are no bigger fish to be caught. Of course, the latter only applies if you are fishing somewhere on a hunch and not following the herd to waters with track records. Doubt sets in. Confidence falls. You start changing things for the sake of it.

While I was engaged with the eel on the bank the other bobbin twitched a few times without developing into a run. I cast out a fresh bait on the left hand rod and scattered the last of the maggots over it, then checked the right hand bait. It had been clamped on. The cut end of it was squashed. Back it went. Both bobbins set I sat down only to have to leap up and strike a run on the left hand rod. I missed it.

I pondered, yet again, why eel activity often comes in flurries like this. As I packed up after everything went back to being quiet I also wondered why my two latest sessions had produced eels big enough to keep me interested. Is it the nearing equinox stirring them to feed up for winter or migration? Have the little ones had their fill? More to the point is it likely to continue? I'm starting to wish I didn't have that new pike rod to try out. I suppose I could always rig it up for eel fishing...