Not being able to get enthusiastic about catching anything else at the moment I went eel fishing again. For what seemed like the first time this 'summer' the evening was still, sunny, and warm. And the horseflies were out. Swarming round my sweaty head when I got to my chosen spot which was free of the moored barge at last.

Although it was still a couple of hours before dusk I cast out two deadbaits, both on a  long-link leger this time. Then I sat back and tied up some traces, listened to the radio, and generally chilled out. Bliss. 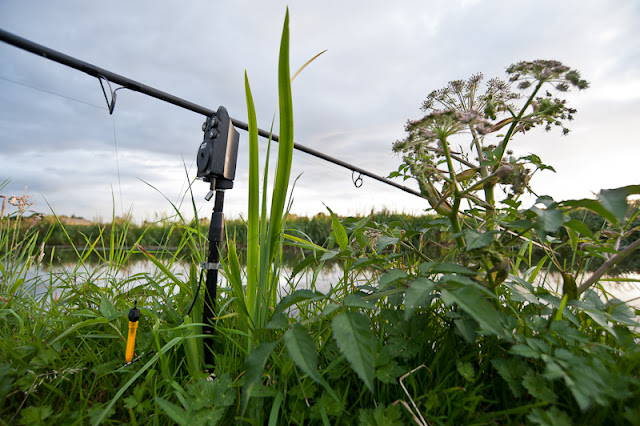 It's not so much a set your watch by them job when the first takes come, more a set your light meter. It seems that the eels wake up when the sun gets to a certain point as it lowers in the sky. Pretty much on cue the right hand bobbin started to dance. I missed that one and recast. Almost immediately the bobbin was jiggling again. Eels do tend to come back to  baits after having them pulled away far more than other fish. A recast bait is often taken quickly like this. Other times I have drawn a bait back to the leger after a dropped run to have it taken again in short order. Sometimes a tug of war has developed between me and the eel! The second take was also missed.

This was the signal for another common eel trait to manifest itself. A take on the second rod shortly after one on the first. Again I played cat and mouse with the fish. Eventually landing one of the smallest I've taken on a deadbait this year. Maybe half a pound. Perhaps it's time to step up the bait size to avoid these little ones? Then again they might still chew on them to annoy me.

During the Test Match commentary it was noted that one of the England players was late taking the field after lunch. The reason was reported to be 'stomach cramps' which the commentators took to be a euphemism. In order to avoid a 'stomach cramp' incident I packed up shortly after returning the small eel...