The novelty of catching small eels had worn off. That was one reason for me staying away from the canal. Turning up to find weed-choked swims, moored barges or hordes of dog walkers were others. After listening to England making a hash of the fourth day's play in the final test the sun had come out, cheering me up a little and giving me the prod I needed to get the rods out.

The sky was clear, the sun bright, but as I walked past the newly cut field of stubble I sensed a hint of impending autumn in the cooling air. This was even more apparent when mist starting rising when the damp land was in shade as the shadows lengthened. 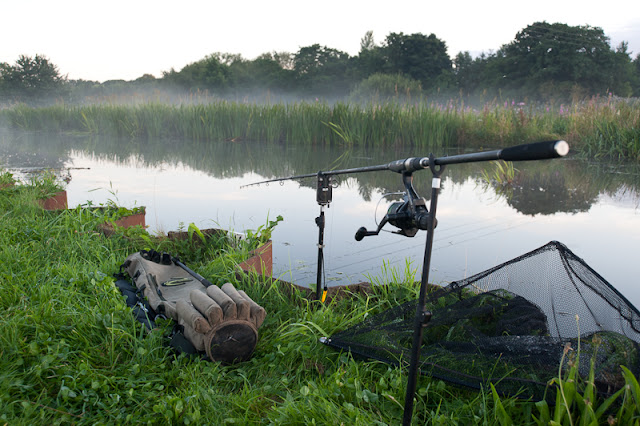 I managed to find a clear swim to fish and proceeded to scatter maggots in two places. One was close in to my left, the other straight across to my right, tight to the reed stems. Then the two roach halves were cast out over the maggots, bobbins attached and alarms switched on.

There were plenty of small fish dimpling and swirling in the marginal surface weed. Fly life was evident with longhorns and midges in profusion. These were no doubt being targeted by the massed swallows that were skimming the canal's surface, and later were flying high. Even when the light had almost gone there were swallows flying over the water, feeding up before commencing their migration south. A lone brown hawker was also making the most of the flying larder.

Apart from a single bleep to the right hand rod and a few tentative twitches of the line all was quiet. The rising mist wasn't doing my confidence much good, the clear sky and cooling air didn't help either. As the stars came out I tidied  up the ruckbag, folded the chair and heard an alarm sound. The right hand bobbin was jerking up and down so I pulled the line free of the clip and opened the bale arm. Line was slowly taken so I struck. Nothing. The rig was tangled on the retrieve. Maybe that was the explanation. I recast. Then I set the chair up to give it another fifteen minutes. This wasn't the first time an eel had picked a bait up as I was packing up. I wonder if they know?

My nose was getting chilly when I checked my watch to see the deadline approaching. That was when the left hand alarm sounded. Again the bobbin was twitching. This time it made its way up to the butt ring. My strike was met with the familiar wriggling feeling of a hooked eel. It felt pretty decent too. However, once visible it shrank. Another run of the mill canal eel that was easily unhooked but escaped before I could check its weight. Damp grass and an almost mystical water seeking ability saw the fish slither to freedom. Time to go.

That might be it for me with the eels. If the average size was a bit higher I'd have more enthusiasm for continuing. I don't expect four pounders every time, but these pound to pound and a half  'straps' are just a bit dispiriting. I could even stand more blank sessions if the eels were a bit bigger. Still, I'm not one for making plans and a late summer heatwave might change my mind. In the meantime I've reminded myself about some rudd fishing I've not got round to, and there's always the lure of a night or two after zander now the days are getting shorter. Or I could upset the summer piking police and snatch a morning after old esox!