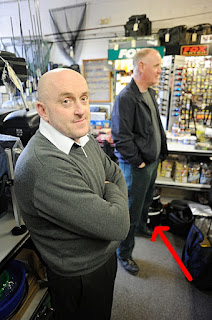 When I called in to my local tackle shop yesterday the Sonubaits agent was there about to show off their new bait and stuff for this year. There were some of this years Sonubaits catalogue/magazines around and my eye was immediately caught by their new buckets as I flicked through the pages. The nice Mr. Slater had some with him (see arrow) and they look to be as useful as I thought they might.

I've had a bucket with a lift out tray before and found it great on te river and for tenching. Using the tray as a mixing bowl for groundbait/method mix while keeping bags and tubs of bait underneath. At other times I used the tray for tackle with bait underneath, and sometimes used the bucket to carry all my gear on short sessions. It wasn't perfect though. 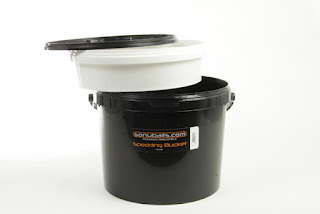 The difference with this bucket is that the 'bowl' clips in place as tightly as the lid. This means the main bucket is sealed and air tight. The lid clips equally securely to the 'bowl'.

The large size would be good for long sessions while the smaller one should be ideal for evening sessions on the river with pellets and PVA nice and dry in the bucket and hookbaits in the 'bowl'. There will be many ways for anglers to make use of these buckets, I'm sure. As soon as they are in stock I'll be having at least one to play around with.

I think the big bucket will retail around a tenner and the small one half that.