There are three things that ruin trophy shots. The first is poor framing. There's no need to get everything in the frame including acres of landscape. With digital this is less of a problem than with film as images can be easily cropped on the computer, or even with the camera's inbuilt software. But it's always better to get it right from the start so you have more pixels to play with. The subject of a trophy shot is the fish. So get in close, or use the zoom to make the fish as big in the frame as you can.

Don't get in so close that part of the fish is chopped off, and leave enough space around it in the viewfinder to stop the picture looking cramped, just not so much that the angler looks like he's in the next county.

The second biggest cause of awful fish photos is the light bouncing off the fish into the lens and causing over exposure. This seems to be a major problem when photographing pike as they have flatter flanks in comparison to other species. 'Round' fish like carp and barbel only reflect light into the lens from a small portion of their body, resulting in a highlight usually near the top of the flank. A pike's flat sides become one huge highlight and can result in photos of white pike with no markings. Sometimes this can be corrected at the computer, but if you only want to point and shoot you probably don't want to delve into photo processing.

Imagine the fish is a mirror and get things set up so that the light doesn't bounce directly into the lens. The easiest way to do this on sunny days is to line things up so the sun is behind and to one side of (rather than directly behind) the person with the camera - as in the perfectly framed photo above. Another benefit of having the sun hitting the fish at such an angle is that it eliminates the possibility of the photographer's shadow being cast on the captor and fish - which always ruins a picture.

If the situation prevents positioning angler and photographer in this way, or if using flash when you are pretty much stuck with the position of the light, the angler should turn the fish  in such a way that it reflects light to one side of the lens. Rolling a pike so that its back is slightly closer to the camera than its belly can do the trick, or angle the fish so it's head is closer to the camera than its tail. 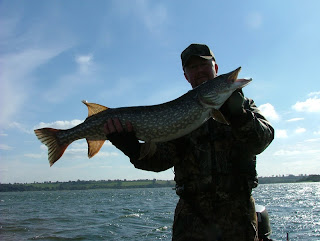 Particularly when boat fishing, but also when the angler is on the bank with his back to the water, another problem arises. The camera takes an average exposure reading and the angler and fish become dark. The photo on the left illustrates that. Don't despair.

The built in flash on most cameras is very intelligent. Switch it on and the camera will do its best to balance the flash with the daylight. The shot below was taken a few seconds after the dark one, but with the flash popped up and fired. 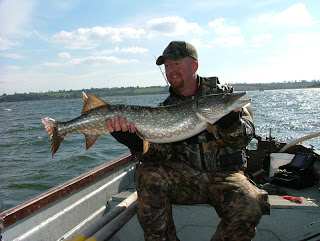 If you're wondering what clever settings were used, and what fancy camera, you'll be disappointed to learn that all the pike photos on this page were taken in 2004 with a 3.1 mega pixel, bridge camera set to Program mode. Not state of the art at the time, and ancient technology by today's standards.

Forget any scene modes your camera might have which are supposed to deal with various lighting conditions. They're nothing but trouble in my experience. If all you want to do is point and shoot stick your camera in to Program. If it's dull or dark, or the sun is behind the subject, use the flash. This approach will work well enough with most cameras - even  SLRs. Flash is also useful on sunny days when the captor is wearing a baseball cap irrespective of the sun's angle. The flash will take away some of the shadow cast by the cap's peak.

In this age of autofocus cameras I'm not sure why the third common fault manifests itself, but I still see plenty of blurred trophy shots. Some are the result of the camera missing focus for some reason. I have had this happen occasionally myself but usually because of user error. A quick zoom in on the camera's review screen should reveal any major problem in this department and allow a retake.

Autofocus isn't foolproof. In dull light, and even more so in the dark, it might struggle. Most cameras will have a light that helps in these situations so check it is not disabled. Shining a light on the fish also helps once the sun has set.

All the above applies equally well to self-takes (if doing a self-take in the dark use your head torch angled down over the fish's flank), and unless you want to start doing more than straightforward trophy shots there's no need to get more involved in using the camera's settings than sticking it into Program mode, thinking about the direction of the sunlight and using the flash when necessary. If your camera gives you a choice of focus modes select the one which automatically picks out the object closest to the camera. That should be the fish, which is what you want as sharp as possible.

Another cause of blurred photographs is camera shake. In dull light Program mode might select a shutter speed that is too slow to avoid wobbly hand syndrome and your photos will be blurry. A warning will usually display on the screen or in the viewfinder if this is about to happen. This is a signal to use the flash. The duration of the flash is much shorter than any shutter speed and will freeze any motion your shaky hands might introduce. More and more I'm finding that the flash is useful in fish photography during daylight. It certainly helps in the gloomy days of winter when pike fishing.

There are a few more compositional matters to be considered that will improve trophy shots. Selecting a spot with an uncluttered background helps make the fish stand out. This isn't always possible of course. Whatever the background try to look out for trees growing out of the subject's head, and for other objects that intrude into the picture. Move them if possible, or shift your position to move them in the frame. 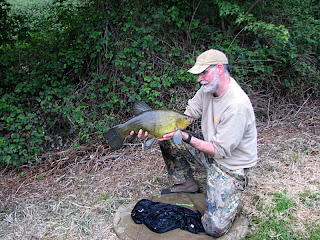 The two most common instructions you will have to give will be 'kneel down' - having the camera at the same level as the fish rather than higher makes for more natural looking pictures (unless you are deliberately trying to hide the background!), and 'get closer'. The photo of me with a tench illustrates both of these faults perfectly. If the stranger tells you they know what they are doing and ignores your suggestions you'll soon be purchasing a tripod to do it yourself!