I don't know why I bother 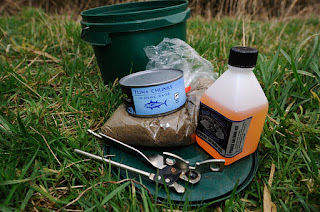 Back in the old days, thirty years ago when I first fished the drains, I had some success using swimfeeders packed with chopped fish on my deadbait rigs. For some reason I stopped using the method. Probably because I was using livebaits more frequently and they worked a lot better than deads did at the time. 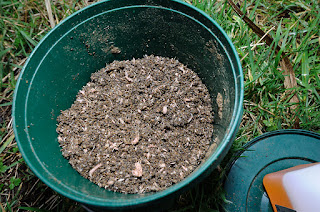 Now the drain pike are taking deadbaits regularly it seemed like a good time to try boosting the attraction again. Over the last thirty years I have dabbled with injecting baits with oils and flavours and given it up as a bad job. They never made a noticeable difference to my catch rates.

However, inspired by Chris Hammond's piece on The Pike Pool, but not liking the look of the messy paste making process, I thought up a groundbait idea. The ingredients are shown in the top photo, and the mix in the one below it. The brown powder in the bag is trout pellet paste (ground trout pellets).

First time out with the mix I threw a couple of balls around two baits (I've also taken to chopping up bits of the baits I'm using and throwing them out), and they were the two that produced the only runs of the day.  I was on to something! Second time out I again baited round two of my deadbaits. It was the other bait that went. Damn. On the third trip I chucked the groundbait at all three deads. And blanked. I've got another bag of paste and more tuna, so I'll probably give it another go. To get rid of the bloody stuff if nothing else. I had such high hopes.

Two trips so far this year and one fish caught. That came on a short session. A full day was the aforementioned blank. It wasn't an enjoyable session. It started well enough with a light breeze blowing and the air warm. Then the wind picked up, as seems inevitable at the moment, making it feel a lot cooler. Some showers blew in meaning it was brolly time. The wind got up so strong that the brolly sides were trying to wrap around me. I never put much effort in under these conditions, but the water looked spot on. One clue might have been the lack of surface activity at first light. The short productive session had seen much dimpling and splashing of small fish. Easy to spot these correlations with hindsight.

What has been interesting out on the mere recently is that I have seen a marsh harrier on each of my last three sessions. These birds seem to be wintering in the region on a regular basis, and away from the coastal marshes now. I am assuming it is the reed beds that have been created on the nearby nature reserve that are, at least partly, responsible for the harriers' presence.

Here's me trying not to look miserable with my first pike of the year. 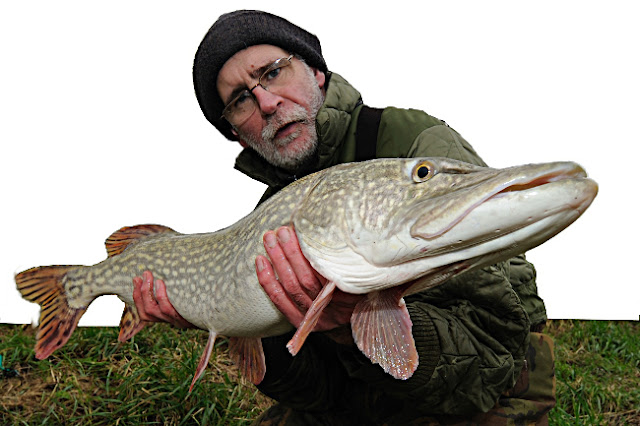