Out with the big guns

After my recent sessions scrabbling about on the banks of the drain I felt like a chillout session sat in one swim on a stillwater. I headed for The Land that Time Forgot, seeing the hilltops shrouded in the usual low cloud of the area's peculiar micro-climate as I approached in the dark. For once this wasn't a prelude to a drenching, in fact the sun got quite warm later on, although there was a hazy mist in the valley. It is a strange place. The bases of all the trees are thick with mosses and lichen in the perpetually damp atmosphere. It's a perfect place for fungi, and there were plenty to be found in the leaf litter. While I waited for something to happen on the pike front I took a few photos of some. I didn't have the right lighting to do them justice though.

I'd left the drain rods at home and rigged up the old faithful P-1s, nigh on 20 years old now but still hard to beat as all round pike rods. Initially I was going to pair them up with the 10,000 Baitrunners I'd recently spooled with fresh mono, but when I came to remove the old Spheros's from the rods I just couldn't do it. The spool sizes are pretty much the same but the Spheros has a nice chunky single handle, a big anti-reverse switch (the new Baitrunners have minute ones), are more compact, lighter and just feel bomb-proof. So I loaded two of them with the new line and put the 10,000s back on the shelf where they have spent most of the time since I bought the bloody things.

Before it had come fully light I had three baits out; a joey mackerel legered without its head at medium range, a sardine paternostered close in on a sunk-float rig, and a lamprey head belted to the horizon (well, maybe 60 yards) using a Baitblaster I had fitted a new handle configuration to the other day. The 'Blaster was coupled with a Biomaster 8000 which has seen very little use since I acquired it shortly before leaving large stillwaters alone!

With the weather remaining unseasonably mild I was full of confidence. The hint of easterly in the wind I had taken shelter from should have made me think otherwise.

It was good to be out and not feel like I ought to be moving every hour or so. Then again if I had had more time I think I would have made a move, but I was using the session as a way to visit a plastic bag factory on my way home, so couldn't fish until dark. I did move the baits around though. Twitching one or two, recasting to new spots, even leapfrogging one over the others. It did me no good. Most of my entertainment came from watching the wind blowing mini tornadoes of rusty leaves through my swim, some hitting the bobbins with enough force to cause the alarms to sound.

The bird life was notable by its absence to start with. As the day warmed more feathered creatures showed themselves along with the robin that had found the remains of a another day's angler's maggots. A pied wagtail was the first to appear along the water's edge followed by blue and great tits in the willows. An unusual call alerted me to a movement on a tree trunk where I eventually spied a nuthatch working its way up and down, inspecting crevices as it went. As nimble as a squirrel it ran down the trunk head-first at an alarming rate. Another quick movement made me think I had seen a treecreeper taking flight to the base of an adjacent tree, but I wasn't sure. A few minutes later my intuition was proved correct as I watched one make its way up a tree trunk and along a thick bough.

Birdwatching is fun, but catching fish is better. As I wasn't catching fish I wasn't to bothered to have to leave. I packed up at two and went to buy my plastic bags. Leaving the factory I headed towards my local tackle shop. I've been finding new uses for Braid Stops all the time and am in need of some more. There were other things I wanted so a stop at the tackle emporium would see me prepared for another session soon. The autumnal light and the mist hovering over the Coastal Plain as I descended Parbold Hill made me change my mind. I'd go and give it an hour on the drain before dark. While there's a bait in the water there's always a chance. So some say.

The chance was slim. No chance as it turned out. What heat the sun had soon dissipated as it set. With no shelter the chill from the east was more apparent than it had been earlier in the day. I had my excuse - when the wind's in the east the fish feed least. It hadn't stopped them topping at first light, however, and it didn't stop them at dusk either. What do we know of fish behaviour? 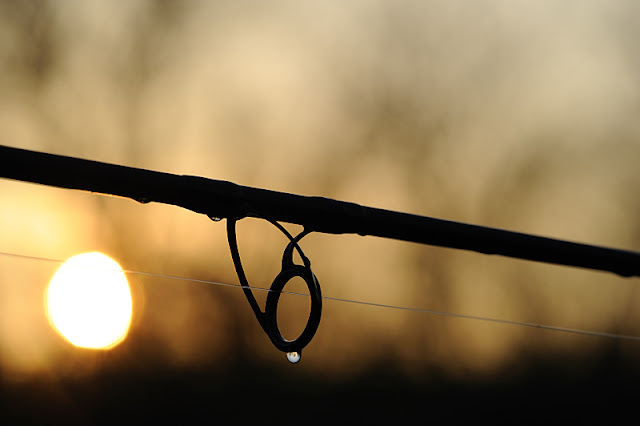