It's all coming back to me 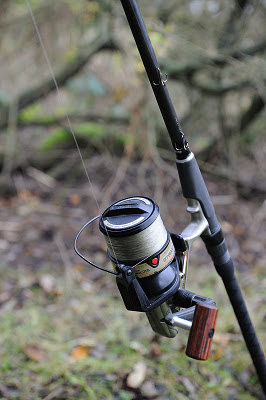 Back to The Land that Time Forgot today for another session determined to do put in a full day and work harder at it. The plan was to fish the west bank in the morning and move to the east for the afternoon working on a theory that the pike might be following the sun. There was no sun to follow. It was overcast and drizzly - which kicked my plan to fish a rod to catch a livebait or two in to touch. The rain did ease mid morning and the feeder rod got taken out of the quiver - spurred on partly by the lamprey section snagging solid and me having to pull for a break.

The snagging problem is caused by these Pennine reservoirs having rocks, boulders and lumps of bedrock sticking up on the lake bead at random. There's no telling where they might be and weak lead links don't serve much purpose as I'm sure it's the trebles that get wedged behind them. I've used weak links for years and can't recall one ever breaking when I've snagged up. Where I went wrong today was in twitching the bait back. There's a reason I used not to do it, and that's because it sees you twitching the bait into a snag.

For other reasons than the snagging episode, mainly the lack of bites on the maggot feeder, I moved earlier than I'd intended to. By the time I had got settled into the new swim with a sardine paternostered to my left and a big mackerel head whacked out as far as I could the drizzle had abated. I chucked the feeder out and stuck it on an alarm to fish for itself. The Rig is great for this as the fish hook themselves and all I have to do is pick the rod up and wind them in.

On the second fill of the feeder I heard a single bleep to the rod, followed by a few more as the tip pulled round wildly as the line followed a curve caused by the strong wind. Bingo. I soon had my confidence booster resting in the landing net while I removed the sardine from the paternoster rod. Two more roach were caught, plus a tiny perch, before I wound the feeder rod in and rigged up a popped-up sardine. I've yet to come up with a good way to attach pop-up balls to deadbaits. Livebiats are easy to rig just by tying the pop-up ball to one of the trebles with a length of weak nylon, the stuff I use for paternoster links. Do that with a deadbait and it never seems to sit right and/or the hook pulls out of the bait.

I think I'm getting there now. All I have done is rig a bait flag on to the pop-up link so that it can be snugged down by a braid stop. There's a loop in the end of the link which enables it to be pulled through the bait with a stringer needle. The loop is passed over one point of the end treble which is then stuck in the bait. The flag is snugged down by the braid stop and holds the hook tight to the bait. The sardine stayed rigged nicely until I packed up. The acid test will come when (if...) I get a pike to take the popped-up bait. My concern is that the loop can come free of the hook, so might eject itself. Next time I think I'll tie in a sliding knot (two turn uni-knot) with a long tag for releasing it in place of the loop. 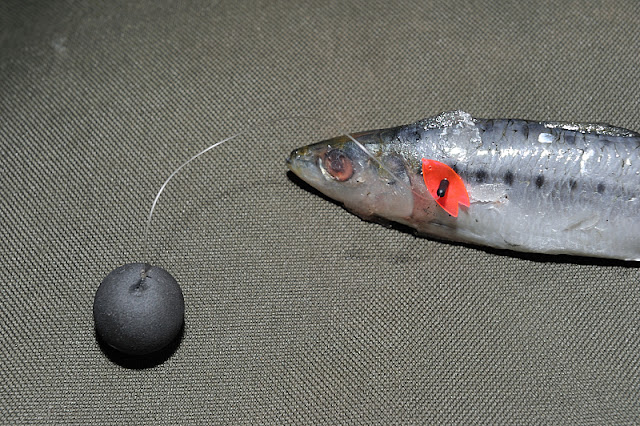 Despite the warm southerly and dull but brightening conditions, and a nice lively bait working away, I had no action at all. And I fished until it was dark enough to require the head torch to see what I was doing as I packed up. It had been a pleasant day in the outdoors, but more things I dislike about pike fishing round here came back to me. Little things like having to climb over dry stone walls, tripping on brambles in the dark, stumbling over loose rocks, and the lack of pike.

At least when I first fished this place it was a good runs water. The chances of a double were slim but the bobbins would drop off more than once a day - often quite a few times more. You need waters like that when the others you fish are headbangers. Round here it seems to be that all the waters are now headbangers. Good fish present, some very good fish, but very few of them in a lot of acres of water. Having pike fished in other parts of the country I got used to expecting to catch every time out. Expecting to catch doubles when I caught, and often catching more than one or two. That kind of fishing doesn't seem to exist locally. If it does people are keeping it very quiet! It was a combination of this situation and the pain of getting up really early to travel to better piking that saw me give up on it and turn to barbeling. I'm enjoying what I'm doing at the moment, but the lack of pike is depressing. I no longer want to be a time bandit and bore the pike into submission. I want to catch fish regularly, but I don't want to do the travelling any longer. If things don't improve soon my return to the piking fold will be over for good.