When I was getting ready for my zander trip the other week I couldn't for the life of me find any drop-off indicators. I've made loads over the years, including some with carbon fibre arms and Solar line clips. Where they have got to is anybody's guess. Lost somewhere the the black hole of my not-required-at-the-moment-tackle universe!

My pike session yesterday got me wanting to do some more, and to use my trusty Delkims as audible indicators. I needed three drop-offs. I found three Gardner line clips on some never-used captive backleads. Rooting around in a box of tackle bits I came across three translucent red spheres which I had saved for making bobbins a few years ago and never got round to working out a good way to utilise them.

The spheres originally housed 'wet wipes' in a coin operated dispenser in a gents toilet at a service station which was en route to a tench water and made a handy break to my journey. Every time I used the gents I eyed up these spheres, which came in many colours, trying to fathom a way to ensure I didn't waste my money on colours I didn't want. I must have got lucky when I decided to buy them! The wipes came in handy, but weren't as wet as they could have been. The spheres were perfect. I never turned them into bobbins before as I couldn't fathom out a good way to do it neatly. It took me most of this morning to work out, after some trial and error, how to make a neat job without ruining at least one of the spheres. 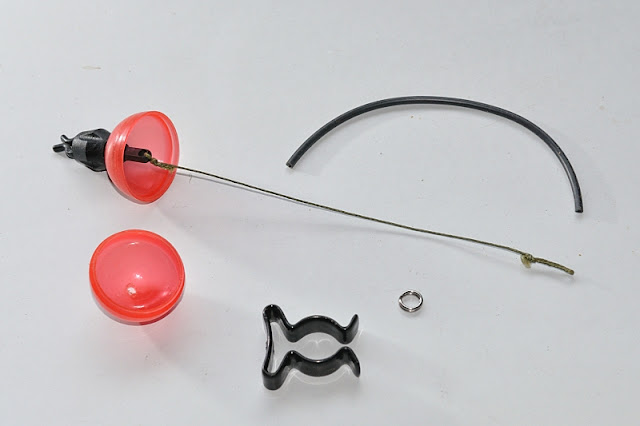 The components are shown above. The spheres come apart easily, clipping back together easily too. The first job was to make a hole in one half of a sphere. I used the pointy part of a wood boring bit to make the hole, centralising it on a moulding mark. By good fortune this worked out just small enough for the threaded part of the Gardner clip to screw into. I tied a length of heavy braid to the clip then worked out how long it needed to be by putting a rod on a rod rest so the bobbin set just below the reel's spool. A loop was tied in at the right place.

Braid is fine as a cord, but being so limp and thin it is tangle prone. I thought that sleeving it in silicone tubing might alleviate that problem. The braid was threaded through the tube with the aid of some 60lb trace wire, folded back to make a threader. This worked a treat. A hole just wide enough to take the tube was made in the second half of the sphere, using the same drill bit, and the sphere reassembled. The loop in the braid was passed through the hole in a Terry Clip, and then threaded on to a small split ring which acts as the retainer.

Fully assembled the bobbins almost look as if they were professionally made! 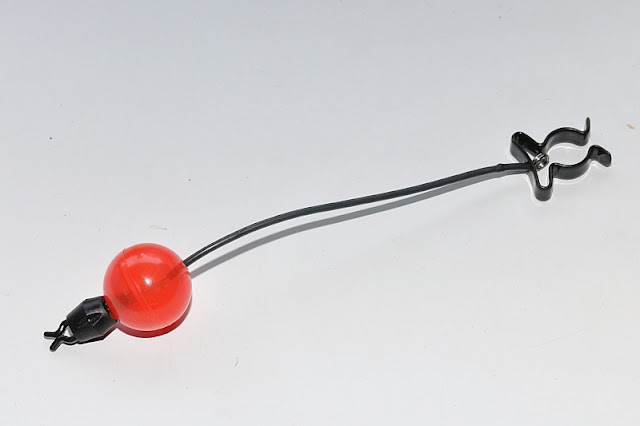 As is usual with my luck, shortly after I got my three red spheres the vending machine was removed in a revamp of the service station, and I've never seen them anywhere else! A similar construction method could be used to turn a polystyrene ball or some other spheroid into a drop-off bobbin though. 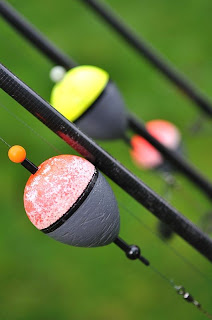 Still in the mood for a spot of pike fishing I decided to spool up three Baitrunners with fresh braid and re-rig my P-5s. I'll probably go back to my ancient Shakespeare reels, they are still smooth after all the years I've had them and they have a good gear ratio and lovely big wooden handle grips, but the Baitrunners have instant-anti-reverse which makes them less likely to throw slack line when in the quiver. More of a problem with braid than mono which stretches and takes up the play in the gearing. Hard to explain in words.

While I was at it I tried to dream up an all-purpose drain pike rig. One that can be quickly swapped from a float-leger to a float-paternoster, or even a free rover. If it works out I'll no doubt explain it here.

The next job was to pare down the rubbish in my pike box. Why on earth was it full of leads? Then I had to sort out the banksticks with the quick change Delkim attachments. I hope everything is sorted now. I'll find out if I have forgotten anything soon enough.

One thing I'd like to do away with is the low chair. It's an encumbrance when trying to be mobile. However, a winter of drain piking in the east when I travelled light with just a camping mat to sit on resulted in a bad back so troublesome I missed most of the end of season fishing as I could hardly walk. So a low chair is an unwelcome essential. I've tried doing away with a rod quiver, banding rods and net together, but all I end up with is a tangled mess. A quiver is light enough, and it also frees one hand to carry the blasted chair! All I have to do now is empty the junk out of my rucksack and I'll be ready to rock.
Posted by Dave Lumb at 8:46 pm