Back for another eel session on another still evening. Not as warm as yesterday, but sunny and quiet with fewer dog walkers. The approach was pretty much the same except I fished a different swim and put two dendrobenas on a size eight on one rod. Two spots were baited with maggots and my attempt at catching a small fish for bait was successful. One small rudd was landed, a similarly sized skimmer escaped as I swung it in. 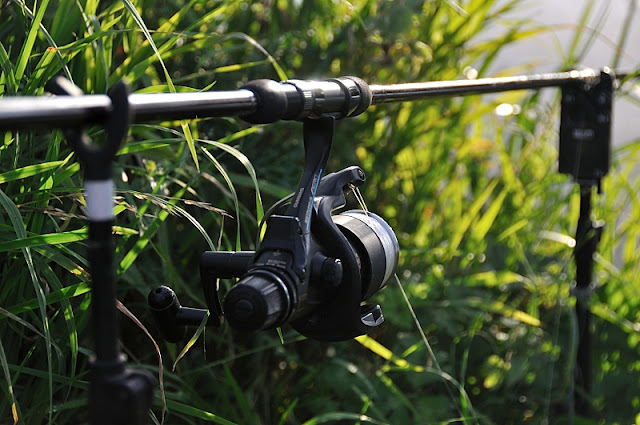 There was a change to the bite indication this time round. I hung my lightest bobbins on the line and had the baitrunners slack as before. The plan worked in part. Just after eight thirty, with the sun set but still plenty of light, I had a run to the rudd head section. My strike met with no resistance. The bait was gone, however. While rebaiting with the tail section the bobbin on the worm rod flew up and after flinging the rod I was dealing with to one side I connected with something. Something that turned out to be a modest bream. Reasonable for the canal, but modest as bream go. The way the bobbin had shot up had me convinced an eel had been responsible. 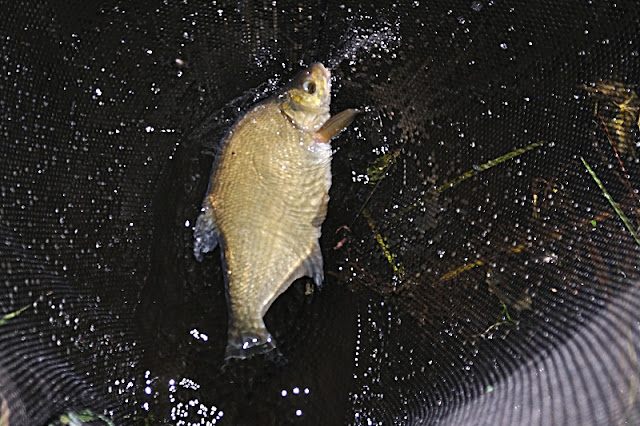 It's that time of year when the heat soon goes out of the air and dew forms on the rods. The cool dampness is most noticeable at ground level and standing up always makes me feel warmer. Even so the woolly hat was required, and the fleece mittens got an airing too. Not having taken a flask, and not being in the mood for a longer stay, I was on my way home at nine.

It's a funny thing, but these days I can only face really short sessions with no travelling - the canal is ten minutes from home - or two/three night sessions a long way away. I can't get into gear to fish six or eight hour sessions an hour's drive from home, or full day sessions anywhere. Maybe the short winter days will change that. I'm getting twitchy about doing some piking this winter. Although I know a couple of blanks will soon change my mind. I seem to be getting more and more impatient with fishing as I get older - unless I'm chilling out on a long session.