Glue was drying, sun was shining, so I grabbed a couple of rods, some bait and some bits to go carp/rudd fishing. The plan was to chuck some pellets out and put a couple of 10mm boilies on top of them while float fishing for rudd. As it turned out the lake was packed with carp anglers. I should have known that sunshine brings them out of hibernation. So after circling the entire lake I set up the float rod in the swim nearest the car...

I couldn't be bothered putting a carp bait out, and as soon as I saw the first rudd glinting gold and red in the sunlight all thoughts of carp went out of my head. 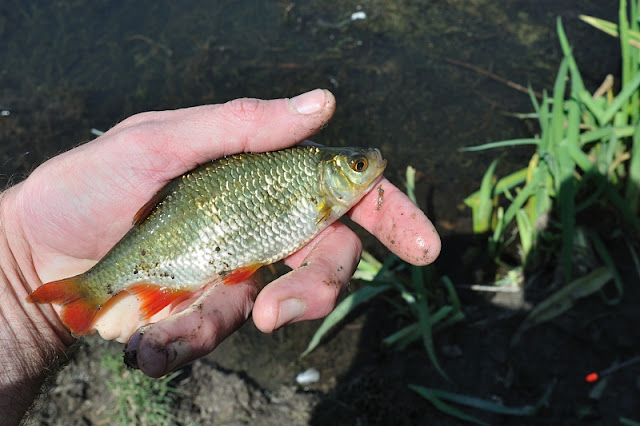 There was nothing complicated involved in catching the rudd. Spray a few maggots out and cast a pellet waggler into the area with a single maggot on the size 20 hook set a couple of feet deep. It was pretty much a bite a chuck, and  a fish every other cast. The biggest problem was the perch that moved in. There was no way to avoid them. It was purely pot luck which species took the bait, and how big or small they were. I'd guess none of the fish were over six ounces, but the rudd were little beauties. 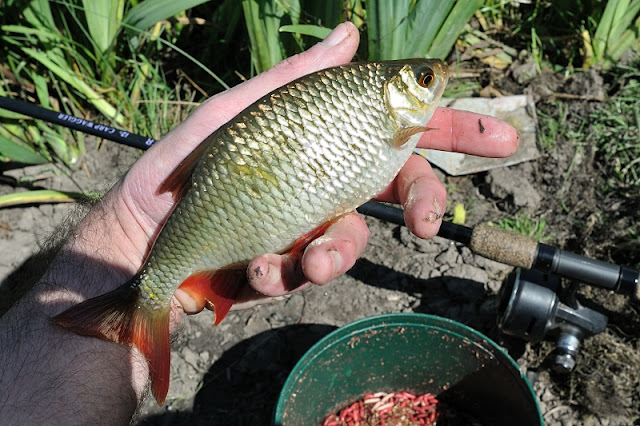 I wasn't keeping a count, or paying attention to time, but after an hour or so I got in a tangle. Not having a tackle box with me I would have been a bit stuck to fix the float back on the line using float stops. So I packed up.  I think I've said it before, but sessions like this bring back the feeling that got me in to fishing in the first place. And those rudd have got me kinda hankerin' to catch some bigger ones. If only I could track some down in a pleasant water, which they haven't been stocked into at a large size.
Posted by Dave Lumb at 4:50 pm