On Thursday I headed south again after stopping to pick up some maggots and a tub of dendrobenas. If I'd set off half an hour earlier I'd have got the swim I was hoping to fish. As it was a local was setting up in it for the evening when I arrived. With a few hours until dark I had a wander around before selecting my swim. On passing a stand of uncut vegetation I disturbed a cloud of damselflies the like of which I have never encountered before. There were dozens of them in a small area rising upwards like miniature helicopters with shiny translucent rotor bladed glinting in the sun. I've seen numbers of damsels before, but never so many. 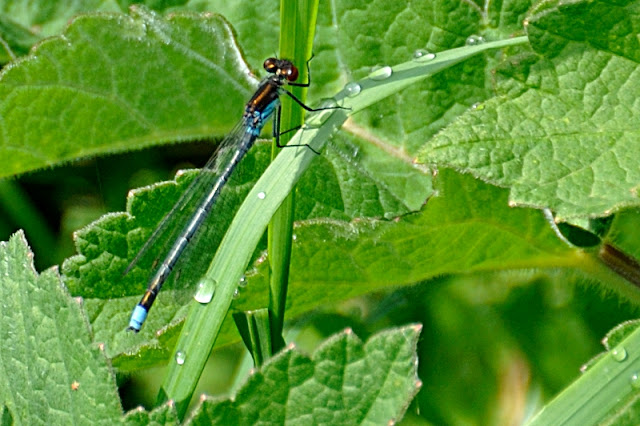 With no rain imminent I took my time setting up, getting some bait out and casting the rigs over it before putting up the bivvy. One rod fished two grains of plastic corn, the hemp and groats had a can of corn added to them for my spod mix. The second rod fished a heli-feeder rigwith three red maggots on the hook. In anticipation of perch the third rod was set up with a running in-line feeder and a worm was the hookbait. No sooner had this rig hit the bottom that I was wondering why I couldn't get the bobbin set. A perch had taken the bait! As last time it was the usual not-quite-two-pounds. 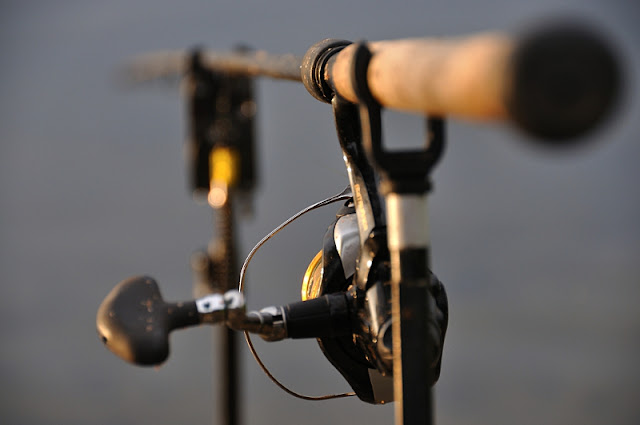 The night was mild and my confidence high. All that disturbed my slumbers were numerous 'bat bites'. In the morning the wind had swung from the south to the south east, still more or less off my back, as I spodded out some more feed just after first light and before first brew. All was quiet until eleven fifteen when I bumped a perch off after a couple of head shakes. That to the maggot rod.

During the day I had a few indications that turned into nothing. Possibly liners, possibly small fish playing with the baits - although no maggots came back as skins. The day wasn't uneventful. With the sun beating down there was an alien invasion force in a miniature re-enactment of the D-Day landings. Damselfly nymphs were leaving the water en masse, crossing the dry marginal mud as they headed for stems to cling to while there bodies hardened and cracked open to allow the adult insect to emerge. 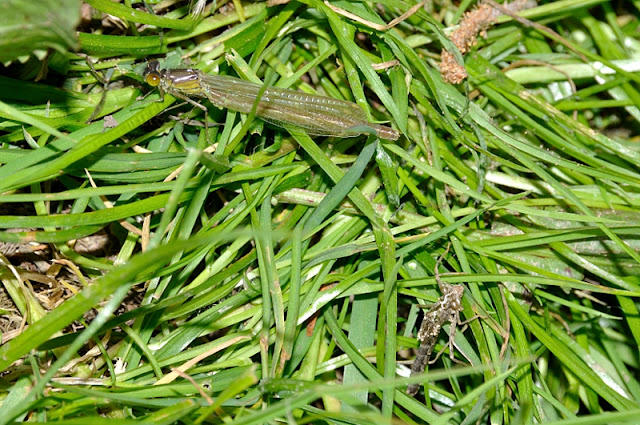 There is always a failure rate in this process, some emerge with wings damaged or missing doomed to starve lacking the ability to fly and hunt, others don't manage to make it that far. Such are the numbers that try the success rate is sufficient to allow the species to carry on. As far as I could tell there were four species on the wing - including the red-eyed damsel, which I had never seen before. If only I'd had my macro lens with me I could have got some better shots of them while whiling the warm afternoon away undisturbed by fish.

It wasn't until darkness was creeping in that I hooked another perch. I had just switched rigs for the night. The corn rod had been recast with a PVA bag of trout pellets attached to the rig. The running in-line feeder turned to semi-fixed and the hooklink replaced with a braided one terminating in two hair rigged plastic casters. The maggot rod was now fishing as a double heli-rig with maggots on the upper hook and worm on the lower. The perch was hooked on the maggots, and when it neared the side there was a swirl near the perch from a pike. On inspection the rig it seemed that the pike hadn't been attacking the perch but had bitten the worm off!

Fancying a quiet night I lowered the rod tips to the water so the bats would avoid the lines during the night. That worked and it was rain beating down on the bivvy that woke me around two thirty. This was the first of a number of short showers that blew in throughout the day.

To my surprise it was a bright spell between the showers that signalled another bite at half past eleven. This fish felt reasonable, and like a perch. Netted it was a sure fire two pounder. So I carefully zeroed the scales before weighing the fish.  Avons don't lie. The needle settled between 2lb 0oz and 1lb 15oz... 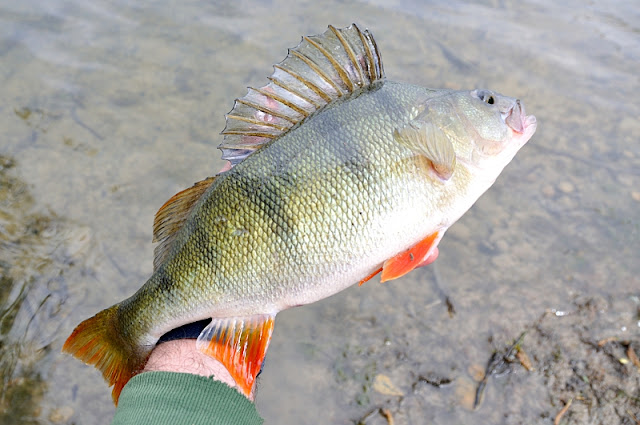 The afternoon progressed as the previous one had done. Fishlessly. There was more rain forecast to arrive during the night. I admitted defeat and packed away well before it arrived. In terms of fish catching the session wasn't up to much. At least it hadn't been a complete blank and near-two-pound perch are nice enough to catch. Even if they're not ten pound tench.