After a lot of chasing insects around with my camera I went for a run out on Friday afternoon to chase after some birds. The location I was heading for also offered me an opportunity to look at a water that is known to produce some rather nicely sized rudd. On pulling into the car park overlooking the 'lake' I was dismayed. Not so much a mature gravel pit, it's been there a goodly while, more a water-filled crater. There was no bankside vegetation except grass - and that neatly trimmed. I didn't even walk to the water's edge before leaving. The rudd would have to be of record proportions for me to fish the place.

The birds were obliging, although I didn't get any photos worth bragging about. There was one mildly amusing one of a young starling and an oblivious sheep. 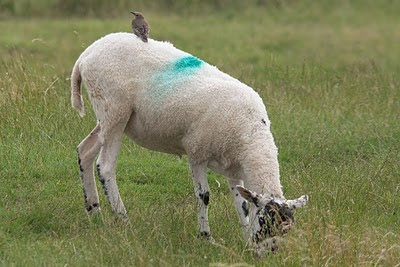 It's like the Serengeti
After Friday the prolonged heatwave broke and the weather returned to our usual summer pattern of rain, followed by more rain, no doubt provoked by the recent hosepipe ban. This meant that photographing wildlife was not going to be much of an option. I always like Sunday nights on the river, so that was what I geared up for. Until I checked the on-line forecast that is. Torrential rain was predicted from 10pm onwards. I don't mind rain in summer, but torrential rain when I'm packing up and making a long walk back to the car isn't my idea of fun. I changed my mind and stayed home.

Popping my head out of the back door while waiting for the kettle to boil around ten I felt a few spots of rain. I guessed that was the start of the deluge and felt quite smug. When I went to bed a couple of hours later the pavement was still dry. I felt disgruntled. More so when I looked out again around 4am and the street was still dry. Bloody weathermen.

Monday morning was damp, however, but the skies brightened around noon and I nipped out to photograph some butterflies I'd found on a day too windy to get any good shots. As soon as I parked up the heavens opened again. There was no respite. The wind was light and the clouds slow moving. I went back home. Within an hour the sky's were clearing again and the urge came upon me. Sod the rain that was forecast. An early tea was eaten, I let the rush hour traffic subside, and at six I was on my way to a river I hoped would be in fine summer flood form.

Conditions looked perfect as I left my car alone in the car park. There was around two feet extra, or a little more, of of perfectly tinged warm water in the river. The rain was nothing more than an occasional spot, the air was warm, the wind non-existent. Superb.

Although I dropped my rods, chair and bait bucket by a swim I knew quite well I then carried on for a look further upstream. I came to a swim I had yet to fish, and it looked inviting. Not only was the bank quite cosy to fish, surrounded by balsam and reasonably flat, there was a small slack by the bank and a lovely crease angling away from the swim. I dropped my rucksack on the damp ground and made to return for the rest of my gear.

It's funny how when you spend time doing something you get attuned to the reactions it requires. Lately I've been photographing damselflies, which are actually difficult to spot when they are roosting despite their vivid colours. As I bent down to roll my rucksack over I saw a male blue damselfly  on a stalk. I'd obliviously disturbed it. With the damp it was roosting low down. It was so lethargic that I was able to encourage it to climb briefly onto one of my fingers as it repositioned itself. The rain had got snails and slugs on the move,and there were brightly coloured bugs around too. Not having my SLR with me an abundance of bugs was to be expected...

Because of the rain I was using swimfeeders rather than PVA mesh. I'd tipped a load of Sonubaits crushed halibut pellets, Hemp and Hali Crush and Tuna Spod Mix in a bucket to use as feed. Dunking this in the river I rather overdid the water content. Some was drained out and the sloppy mess allowed to thicken up by absorption. By the time I had the rods sorted out it was almost perfect, with a bit of a squeeze to compress it in the feeder.

The rigs were the same as last time out, and I didn't even bother putting on fresh baits as the rain had arrived and I wanted to get the brolly up and make myself comfortable. I could change the baits when I'd had a brew from the flask and cooled down from the walk. As it turned out I forgot to change the baits. 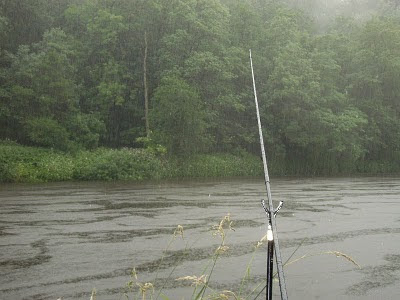 Like the Amazon rainforest...
Not that it mattered. After one recast and forty minutes the downstream rod, fishing the banker spot where the flow picks up at the tail of the eddy, began to pull down and spring back slowly. A dull fight ensued, the fish playing doggo and only occasionally wagging its tail. I guessed the fish at sevenish pounds but weighed it as it looked chunky. A typically pale floodwater barbel of 8lb 11oz. That was easy! 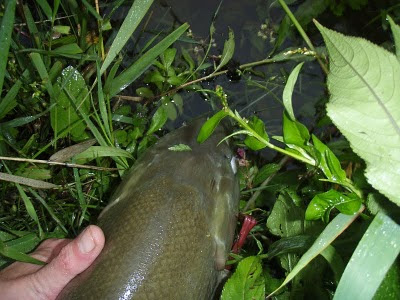 Back goes the blank saver
At eight thirty the same rod was almost dragged off the rest by a fish that pulled much harder, heading upstream at one point and leading me to imagine something much larger than the five-ish pounder that was netted. Time for a change of bait. Disaster! There was no baiting needle in my tackle box. There was one on the dashboard back in the car park. One I'd meant to put in the box. Damn. I was about to wind the upstream rod in and make the walk back when I remembered there should be a stringer needle somewhere in the box. There was. Phew. Two more boilies, a large one and a small one, were put on the downstream rig, and the S-Pellets were replaced on the upstream rod.

It was an hour before the next bite. A typical upstream bouncer. Again a good scrap ensued as another small fish was played to the net. When fishing for barbel in coloured water the only clue you get to their size is when they roll on the surface. They really can fool you with their power in the extra flow.

The fourth fish came to the downstream rod and felt a better fish. It took a fair bit of line and had a dogged power. In the net it looked as good as it had felt. No fooling here. The scales denied me a double, but there's more to enjoying your fishing than putting notches on a rod handle. I was surprised to see a few fish lice on this fish. Perhaps the recent low levels and slow flows have benefited them. 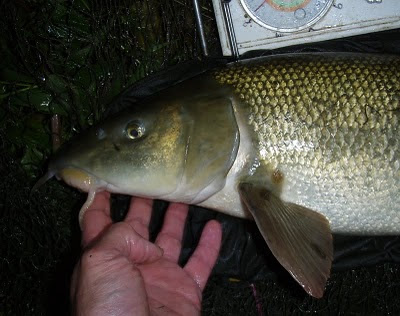 Lice by the pectorals
At times the rain had been heavy enough to make bubbles on the calm surface of the river and enough noise on the umbrella to drown out the radio, at others it was so light it was barely noticeable. On a warm summer evening it wasn't unpleasant.

When darkness set in the chub bites started first, fast jabs that amounted to nothing, then the bat 'bites', tremors that set the rods sacking from side to side. at twenty-five past ten the pellets were taken by a fish that steamed off into mid river. Another scrappy five pounder. Twenty minutes later it was the turn of the downstream rod. This was another eight pounder. Or possibly the same one I'd caught earlier as it looked sort of familiar, having a slightly glazed right eye.

I've often found that as midnight approaches barbel bites tail off. After a biteless hour I took advantage of another dry spell to pack the gear away and leave.